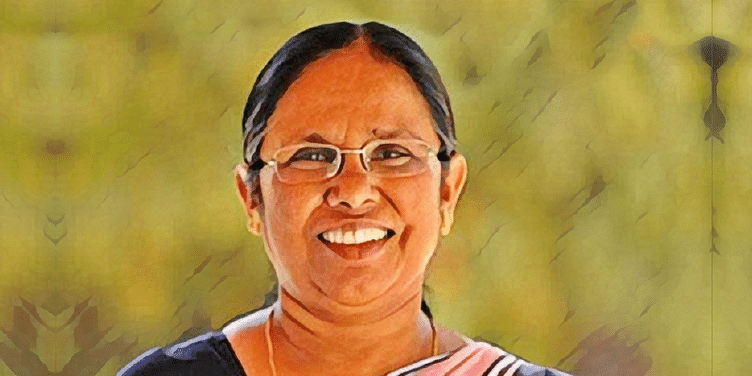 Even as the coronavirus outbreak has tested countries with advanced healthcare systems, Kerala health minister KK Shailaja, with her efficiency, is redefining the idea of contingency response for the social media age.

This is the second time in less than two years that KK Shailaja has inspired hope in Kerala in the time of fear. The second time she has been the face of an informed, concerted response to that fear.

The Kerala Minister for Health and Social Justice was a calming presence amid the deaths and despair that followed the Nipah viral outbreak in May, 2018. Now, with 24 confirmed cases of COVID-19 reported from the state, Shailaja – a teacher before she entered active politics – remains that reassuring presence for many.

She communicates with clarity, without the trappings of a state minister responding to a pandemic; she does her job, no-frills, and tries to say things as they are – there’s a problem and we are taking care of it.

The minister’s Facebook posts have commenters volunteering to help the state government in managing the crisis. Nurses, students, social workers, and drivers have expressed willingness to work with the health department. Many claim that they’ve been inspired by the minister.

During her four years in office, Shailaja has developed a working style that combines structured delegation of official responsibilities with methods that take the public, the common man, into confidence.

She has inspired trust by being in affected areas, engaging with subject experts and shunning officialese and rehearsed statements for a more interactive approach.

The minister says she relies on the expertise her team brings and with experience, she has been able to contribute leads for the team to work on. She has visited the infected in isolation wards, stating a lot more than what daily bulletins would about the government’s measures in addressing the crisis.

We are not quite used to Shailajas in public office. We are not used to ministers who acknowledge the efforts of their teams on public platforms.

Secretaries, directors, DMOs, and social health activists find a mention when she speaks about processes initiated to control the outbreak.

Her response to criticism also comes with requests to not “demoralise” her team.

The accolades are still coming in but the 63-year-old Shailaja is unlikely to be swayed by the attention when the CPI(M)-led state government is on mission mode when the job is still not done.

If her approach during the two outbreaks that tested the capacity of Kerala’s healthcare systems is any indication, she’s also unlikely to endorse the fulsome adulation – “Teacher Amma” is standard praise now – on social media.

Not swayed by praise

“None of this is permanent, it’s a bubble,” the minister from Mattannur in Kannur district said in an interview with Mathrubhumi News, when asked about the social media love.

This is an administrator who can see through the hype, who can connect the buzz around her to a star footballer’s match-day pressure. It’s all good when he’s scoring but when he can't, how many will remember the goals?

Shailaja, an activist of the CPI(M)-affiliated Students Federation of India during her years in the Pazhassi Raja NSS College in Mattannur, represents the Koothuparamba constituency in Kannur district in the Assembly.

She taught science at the Sivapuram High School in Kannur, a stint her team members believe has helped her in effectively responding to the outbreaks.

The third-time MLA is a member of the CPI(M) central committee. She’s married to K Bhaskaran and they have two sons, Shobhith and Lasith.

The allegations of the Congress-led Opposition regarding inadequacies in handling the novel coronavirus crisis in the state are coupled with the argument that the minister is, after all, doing only what a minister is expected to.

So what really explains Shailaja’s standing as a unifying figure with an appeal that almost transcends politics?

The answer could be in three attributes perceived as rare in public office – efficiency, accountability, and transparency.

Ramesh Chennithala, the Opposition leader, says the minister has “media mania” and is meeting the Press too often. He can stay snarky – Kerala has an Assembly election next year – but by remaining accessible with every new bit of information coming in from the state’s 14 districts, by dismissing claims of unscientific cure, and initiating action against fake news on the outbreak, Shailaja could be redefining the idea of contingency response for the social media age.

Kerala has reported, till Sunday, 24 positive cases of COVID-19. Three of the infected, all students from Wuhan in China, had recovered during the initial phase of the outbreak. The state has 10,944 people under observation, 289 of them in hospitals. Of the 2,147 samples dispatched for examination, 1,514 have been tested negative.

This is an outbreak that has tested countries with advanced healthcare systems. The task at hand for governments in India is massive and Kerala could inspire other states in confronting the fear that’s spreading faster than the virus.

Flow charts that detail travel routes and social visits of the infected have been prepared and contacts are being traced.

The minister, meanwhile, also had to explain in the Legislative Assembly why there was an error in the name of a hotel visited by the affected. There’s also criticism against political narratives that overstate the minister’s and the government’s interventions in managing the crisis.

In another interview, the minister dismisses talk on her “image” and says that a minor error could still undo all the good work.

This cannot always be a rewarding job and Shailaja seems to understand its complexities better than the footballer in her analogy, not affected by praise or limited by the grievances.