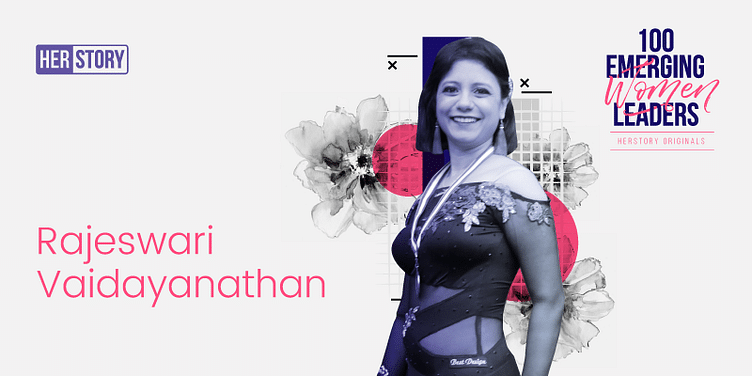 In this feature of 100 Emerging Women Leaders, we feature Rajeswari Vaidyanathan, the banker-turned-dancer who introduced dancesport to India. Over the years, she has worked with the likes of Mira Nair for A Suitable Boy and actors such as Ranveer Singh.

Rajeswari Vaidyanathan had always been interested and passionate about dance. But she nevertheless followed the regular cookie-cutter model of excelling professionally and academically.

A child of an IIT-Kharagpur topper, mediocrity and choosing a different pathway simply wasn’t an option. A post-graduate from ICFAI Business School, she impressed recruiters enough to be part of an O&M summer placement programme in rural marketing.

“Girls couldn’t participate as it was considered to be difficult. It was my first real step into a ‘man’s world’. But I pursued and worked hard. I used to start my days at 6 am and end them at 2 am, and would spend time in the most rural parts of the country,” Rajeswari tells HerStory.

She went on to become a banker and was leading a high-powered life until 2014, when she developed a life-threatening tumour in her stomach. After the surgery and rest, she realised she needed to pursue dance.

“I decided to break away from the corporate world and pursue my passion. This came as a shock not only to my family but also to my seniors, as they were confident that I would have risen to become one of the top 20 powerful women in corporate India within the decade. But I was drawn to something else. I wanted to attain this feat as an entrepreneur,” she recalls.

From banker to dancer

At the age of 36, she reconnected with her passion to become a dancer. By then, she was an accomplished banker. When she married, she moved to Mumbai without a second thought. But she believed in herself, and after few weeks, she was first with Citigroup selling premium credit cards, then moved to ICICI Prudential Life Insurance. She then moved back to Citibank and then was with Kotak Mahindra Bank as a branch manager.

Her seniors then entrusted her to turn around another highly unprofitable branch. It took her about six months to get it back in shape and a year to take it to profitability. Yes Bank noticed the miracle worker and headhunted her as their Napean Sea Road area manager, putting all branches from Bandra to Fort under her purview. About three years ago, she was promoted to Senior Vice-President.

But she took a call to stop it all and start dancing. It was during this time that she went on to learn different forms of dance.

While travelling and training abroad, Rajeswari found a different kind of zeal among students, who invested hours and hours training and practising to perfect themselves as serious dancers.

Dancing her way to success

“They take this whole sport so seriously. Unfortunately, in India, we lack this seriousness in approach. The main challenges that we face from the students are lack of time and persistence, and impatience. People associate Latin dances with only Salsa, which is much easier and is really a club dance form,” she explains

It was then that she decided to explore a career out of her passion for dance, and established VR DanceSport — a Latin ballroom dance school. With an aim to bring about change in the industry, the dance school is driven by Rajeswari’s passion for International Latin and ballroom dance. It serves to spread awareness of this dance form and popularise it in India.

Along with her closest friend and now business partner, she decided to start Shan and Ragz’s DanceSport India, driven by their common passion for Latin and ballroom dance, to spread awareness of this form of dance and popularise it in India.

Based on the competitive ballroom dancing sport, DanceSport is a form of exhibition dancing that requires dancers to have physical strength, agility, coordination, stamina, fitness, discipline, teamwork, grace, style, and musical interpretation.

They teach all Latin ballroom dance forms like Salsa, Cha Cha, Jive, Rumba, Samba, Bachata, Tango, Waltz, Quickstep, Line Dance, and Disco. They cater to corporate workshops for team building and other HR-related activities and also have a dance troupe in place for corporate and private events.

Despite the dance industry having female stalwarts such as Vaibhavi Merchant, Geeta Kapoor and the late Saroj Khan, Rajeswari tells that she still had to navigate discrimination as she wasn’t a part of the ‘boys’ club’.

“Right from the time I tasted my first success to the time I left the corporate world, I have had men who have often tried to pull me down — it was their insecurity that made them act that way. I never wasted time on mundane corporate politics. But hard work always paid off in the end,” Rajeswari says.