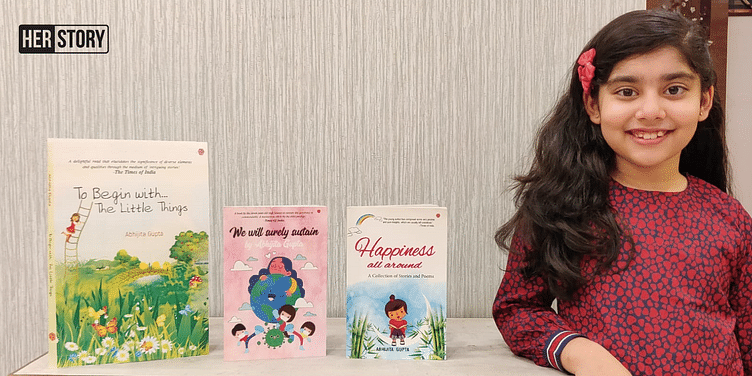 Abhijita Gupta, a Class 3 student, published her first book when she was 7 years old. Her latest book, To Begin with the Little Things, has just released and the girl also received a royalty of Rs 3 lakh for her earlier works.

Class 3 student Abhijita Gupta has done what many adults dream of doing “someday”. The girl, who became a published author at age 7, released her third book To Begin with the Little Things on October 9.

Her first two books, Happiness All Around and We Will Surely Sustain, were released in November last year and February this year respectively. All three books – published by Invincible Publishers - are collections of short stories and poems.

With more than 9,700 copies of her first two books already sold cumulatively across platforms, she and her mother are excited to know how her third book will be received by the masses.

How these young girls are aiding water conservation efforts in Satyavedu, an industrial hamlet in Andhra Pradesh

Talking to HerStory about her new book, Ghaziabad-based Abhijita, who started writing at the age of five, says, “The book has moral stories revolving around issues like why we should value our privileges among other subjects. If we follow these little key points, then we can end up being successful and a good human being, who helps in others’ wellbeing.”

The girl, who finished the book in a span of four months, says her surroundings motivate her to write.

“What I see, what I hear, and what I feel is what I write about. Since we were in the second lockdown and there was so much sadness in the world, I thought I could motivate people by writing this book and rid them of negativity,” she says.

Abhijata’s favourite story from her latest book is Teachers are Guiding Light, which focuses on the importance of a teacher’s presence in a child’s life.

While one would feel that an eight-year-old might be a tad young to talk about morality and life lessons, Abhijita begs to differ.

“I think I am wise enough and old enough to write about moral lessons,” she says, adding that morality to her means the things one should do to climb the ladder of success and be a good person.

Abhijita’s mother, Anupriya Gupta, recalls that her daughter’s reading skills were impeccable since she was a little under four years old.

“At an age when other children learn phonetics, Abhijita could already read well. We started giving her books to read at four and by five she was finishing book after book,” recalls Anupriya, adding that the child made only two spelling mistakes in the first story she wrote.

Talking about Abhijita’s understanding of issues beyond her age, Anupriya says it sometimes surprises her and her husband.

“We wonder how she thinks of all these things and weaves stories around them. But Abhijita has always been a child of logic who says things as they are. We feel that there is an element of mystery around how she says such logical and wise things,” she adds.

Clearly, the child is wise beyond her years – and a conversation with her shows that.

On her idea of success, she says, “I want to be a successful doctor when I grow up so I can serve the nation and mankind just like my grandfather who is also a doctor and doesn’t charge a penny from financially underprivileged people.”

But, she wants to “continue writing as a hobby”.

The nationwide lockdown announced last year confined adults and children also to their homes. Many used the time to cook, craft, and create - Abhijita decided to publish a book.

However, it wouldn’t have been possible if her parents hadn’t shown trust in her writing.

Anupriya shares the struggle of getting a publisher on board.

“It was quite an uphill task to get a publisher to even consider a seven-year-old child’s manuscript. They refused without even looking at the manuscript, which was my main concern. Lots of publishers assumed that it was going to be useless. Some publishers agreed to look at it and three finally agreed to publish her first book. Once we got a few approvals, we chose to go with Invincible Publishers, who signed a three-book deal with Abhijita.”

“We didn’t know her potential when her first book was published but it did well. The second book also fared well and she recently received an advance royalty of Rs 3 lakh for 10,000 copies of her second book from her publisher,” says Anupriya with a hint of pride.

Abhijita, meanwhile, is happy since she knew “since the age of five” that she wanted her stories to be published in the form of a book. She says she was “filled with joy” when she picked up her first book.

“I can never forget that moment; I was jumping up and down with sheer happiness.”

If you care about equality, Ameera Shah and Apurva Damani have 6 important messages for you