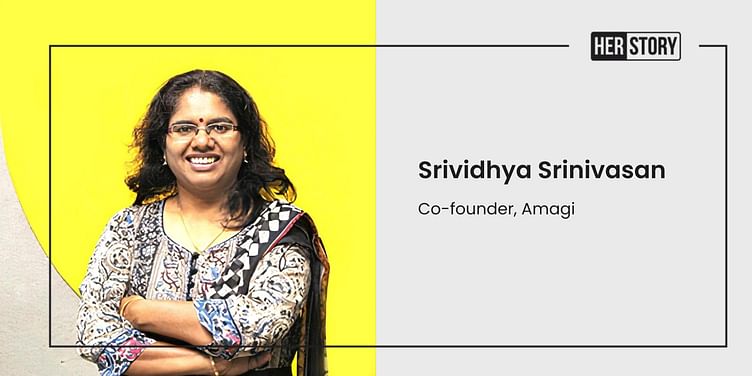 While looking to start up in 2008, Srividhya Srinivasan, Baskar Subramanian, and Srinivasan KA realised that they wanted to revolutionise global content delivery and monetise the media industry.

Its clients include top-tier broadcast TV networks, digital-first networks, content owners, FAST, and OTT platforms in the Americas, EMEA, and APAC regions. The company has grown 100 percent over the last two years and is profitable.

In 2021, leading SaaS venture capital firms — Accel, Norwest Partners, and Avataar Ventures — invested over $100 million in Amagi. Premji Invest and Nadathur Holdings, who invested in the company in 2014 and 2008 respectively, chose to continue as investors.

The transaction also saw the exit of its earlier investors, Emerald Media — an investment platform backed by KKR — and Mayfield Fund.

Amagi has a presence in New York, Los Angeles, Toronto, London, Paris, and Singapore, broadcast operations in Delhi, and an innovation centre in Bengaluru. Amagi has 400+ employees and continues to hire and expand operations across all regions.

"Premji Invest has always collaborated with organisations that leave an indelible mark on the industry where they operate. I have seen Amagi’s journey from very early stages, and strongly feel that they have pushed the boundaries of cloud capabilities and gone above and beyond to revitalise a legacy-driven, infrastructure-leaden industry, with the power of new-age technology. Their ability to create long term value for their customers has been unparalleled, and is the key reason for them to have grown at an astounding CAGR consistently over the last five years," says  Atul Gupta, Premji Invest

What does it take to build high growth engine unicorns

The trio knew each other from their days at Government College of Technology, Coimbatore, while studying to become software engineers. They co-founded Amagi in 2008 after their previous venture, Impulsesoft, was acquired by NASDAQ-listed SiRF.

“For the next company, we set ourselves three objectives — the technology should be disruptive and revolutionary, it should be a billion-dollar company, and the disruption should be through innovation,” says Srividhya.

After much discussion and testing different models, they landed on targeted advertising for leading national broadcasters and advertisers. The first geo-targeted ad using Amagi’s technology was aired in 2009, and within two years, Amagi expanded its base to more than 100 cities in India. Today, Amagi is one of the largest cloud playout and monetisation platforms in the world, with a global clientele and 800+ playout chains on its platform.

There are 400+ employees in the team at present, and we’re expanding rapidly. Over the past two years, the company has expanded to more locations, including Latin America, Canada and different parts of Europe.

As part of their research into the viability of this technology, the founders examined the broadcasting system of other countries and found that the tech that existed was very expensive and not scalable. For it to be a success in India, the tech had to be low cost and easy to scale.

They decided to build this technology from scratch and scale it to 3,000 cities at a time.

“Amagi’s founders took ad democratisation as their problem statement. We believe that targeted advertising technologies can have a transformational impact,” says Srividhya.

They decided to build targeted advertising infrastructure in the country by splitting the satellite signals at specific locations and inserting new ads.

“Advertisers could now choose to target multiple locations (individually), and yet, end up spending less than a national TV ad slot, thus gaining more visibility at a fraction of the cost,” says Srividhya.

‘I had fun’: Dr A Velumani on building Thyrocare, one of India's largest medical diagnostics chains

What does it do now?

In the past year, Amagi has seen increasing demand for 1) virtualisation of workflows among traditional broadcast TV networks and 2) linear TV like experience among viewers.

Continuing their on-premises workflows became a challenge for broadcasters during lockdowns. Amagi’s cloud solutions, tailored at creating, distributing, and monetising live linear channels over satellite, fibre and IP, enabled them to tide over the crises.

“Amagi’s cloud-based technologies allows you to spin up channels on the go and derive revenues from it by using advanced ad insertion capabilities and analytics,” adds Srividhya.

Amagi CLOUDPORT, the flagship product for channel creation and distribution, was conceptualised in 2012 when the company had just one customer for cloud-based media management and was only catering to non-live content formats. Back then, Amagi used to offer cloud-led edge playout solutions (automation on the cloud and playout using edge servers) as full cloud playout was not yet prevalent.

They transitioned to a full cloud playout solution in 2016. In the following years, the platform was upgraded to offer live broadcasting capabilities, content scheduling capabilities, the ability to offer advanced graphics, support a wide range of audio/video formats, and more.

When the OTT boom took over, the platform was further upgraded to support live, linear, and on-demand channel creation and distribution.

The product was further strengthened by adding an analytics layer, to offer content owners accurate and granular data and insights on how audiences are engaging with their content.

“One of the earliest challenges we faced was in collaborating with cable operators who had a limited understanding of the technologies we were building. Making them aware of its potential and bringing them on board was a herculean task,” says Srividhya.

The second challenge was in convincing channels to let them insert ads in between their content. Having never done local advertising before, they were also unsure of the business model and unwilling to experiment with it.

“To counter this challenge, we had to build an in-house ad sales team, buy ad inventories and then sell it to local advertisers at considerable risk to ourselves. We also built an in-house ad creative team to tackle the challenge of ad content ambiguity,” says Srividhya.

In FY2021, the revenues increased by 136 percent, with an 18 percent sequential growth in the quarter ending June 2021. “We have been doubling our revenues for the past three years and we foresee the same trend going forward,” she adds.

Amagi offers three business models for customers to choose from – Software-as-a-Service (SaaS), ‘Bring your own license’, and a Fully Managed Service. We also offer a revenue share model with content owners and platforms based on ad insertions.

The company now has two lines of business: 1) channel creation and distribution, and 2) monetisation.

The startup plans to keep the business momentum going by offering newer cloud-innovated product capabilities and services to support new-age content providers and platforms in their growth journey.

They plan to offer a self-service portal on which customers can access all its products.