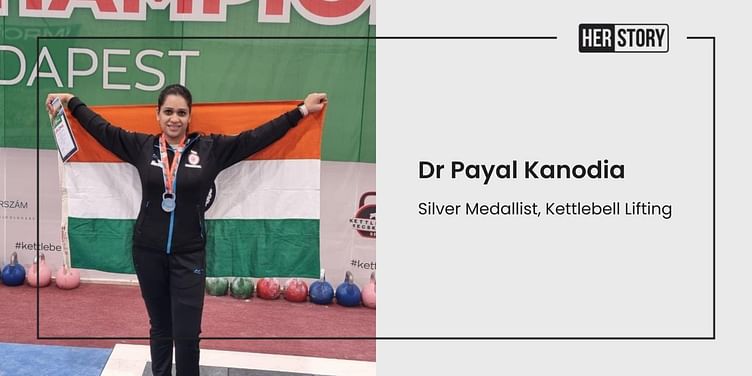 In an interview with HerStory, kettlebell lifting silver medallist Payal Kanodia spoke about how she discovered the sport during the COVID-19 pandemic, won a world championship, and how she plans to support the sport in India.

For Dr. Payal Kanodia, a fitness activity turned into a sporting passion when she started kettlebell lifting during the first COVID-19-induced lockdown in March 2020. Within a year and a half, Payal won a silver medal at the International Union of Kettlebell Lifting (IUKL) World Championship in Budapest, Hungary held from October 22 to 24.

Originally from Tauru in Haryana, Payal has been living in Delhi for over a decade now. Talking about how she began kettlebell lifting, she told HerStory, “I have always been into fitness, and I took up kettlebell as part of my fitness routine and over time I realised that I had the potential to pick it up as a sport.”

Both Payal (35-39 years, 68kg category) and her coach, Anshu Taravath (58kg category) participated in the world championship and won silver.

For 35-year-old Payal, kettlebell lifting was a “random discovery” as she found Anshu’s Skype sessions and started taking the classes. After lifting kettlebell for a while when she won her first medal in the national-level championship. Her family's excitement, she says, motivated her to train further.

“My kids were really excited, and they were more than happy for me winning the championship and seeing them so excited really pushed me to participate and perform to the best of my abilities. My son went and took my medal and I felt so happy at that moment as he felt so proud of his mother,” says Payal.

Payal says she never thought she would win a medal in the world championship. Her primary goal was to represent India.

“Honestly, I just went for the experience and to represent my country in kettlebell lifting at the world level. It was more than enough and more than a moment of pride for me. I had just thought of giving my best shot and coming. Winning wasn’t even a thought in my mind because I haven’t been lifting kettlebells for a long time and there were more than 453 athletes who were lifting kettlebells for decades now. When I won, I couldn’t believe it and it took some time to sink in,” Payal adds.

Talking about the sport’s popularity in India as compared to the world, Payal says, “While a lot of people do lift kettlebell, it’s hardly seen as a sport in India. There is a federation governing it, but it isn’t as active as compared to the ones for other sports.

According to Payal, she realised the sport’s popularity only after landing in Budapest to participate in the championship.

“There were more than 450 participants from 55 countries. Now after winning a medal, I plan to support children who want to learn kettlebell lifting from an early age,” she says.

Payal is also the ambassador of the Fit India programme of the Government of India and the President of the Haryana Chapter of Sports and Entertainment wing of Women Indian Chambers of Commerce and Industry (WICCI).

A doctor by qualification, Payal did not pursue medicine professionally as she joined her family business, M3M India Group which deals in real estate. She manages marketing, HR and CRI department in the business. In 2019, she started the M3M Foundation through which her family contributes towards healthcare, environment, and education to support the lives of the people belonging to the marginalised sections of society. One of their initiatives is iMpower, which helps to provide for the migrant labour camps in Gurugram.

“We train their children and make them eligible to start formal education. We also want to support the children who want to excel in sports and so we are planning to start a sports training program for them,” shared Payal.

As for her own future plans with kettlebell lifting, Payal says that while lifting is a hobby, it is also a part of her fitness routine. “I want to participate in two championships a year without any pressure of winning,” she signs off.