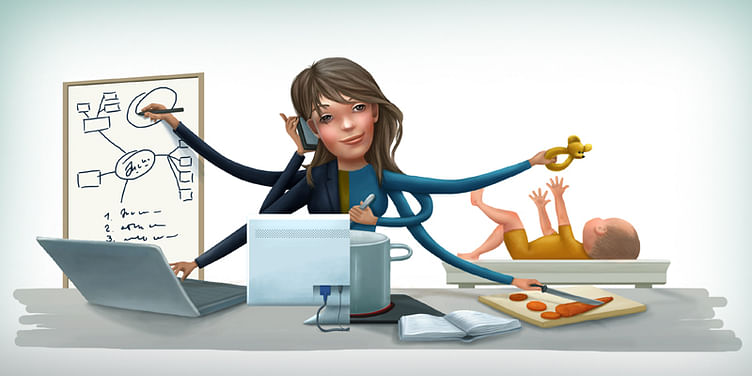 Who is an ideal mother? Prega News’ advertisement for Women’s Day sparks debates on whether women can have it all.

A recently released advertisement by pregnancy detection brand Prega News became the talk of the town for saying that the challenges working mothers face in juggling work and household responsibilities are a matter of ‘perspective’.

Some netizens were quick to point out the advert’s double standards and toxic positivity, while others hailed it for relaying a good social message.

As companies and brands produce women-focused content ahead of International Women’s Day, netizens are sharply divided on the Prega News advertisement.

The advertisement features a young model contemplating what pregnancy could mean for her career while three other women – all working mothers – talk about motherhood.

One of them talks about how one loses out on life while catering to household needs along with work. While the lady is frowned upon, a cleaning lady beams in the sacrificial joy. A saree-clad SSP then acknowledges the challenges and disregards them, claiming that it's is a matter of “perspective”.

Whether a woman can have it all has long haunted almost all working professionals. The world’s most influential leaders, including former PepsiCo CEO Indra Nooyi, have clearly stated that women simply cannot have it all.

But reactions to the recent advertisement suggest that the ad’s faltering lies in its attempt to force a linear and standard narrative of a ‘good mother’ – one who does not complain about juggling professional life and household work.

While some virtually put their hats off for an advertisement with ‘moral messages’, many have accused it of spreading a ‘pseudo inspirational message’ by stating that women absolutely can shoulder both household and professional responsibility.

“Motherhood has multiple meanings and differs with circumstances. Sometimes it's not that easy to balance work-home-baby. It depends on family, finances, office policy, partner behaviour, and even the requirement of the child,” tweeted Shruti Kedia, a New York-based policy analyst.

Raheela Baksh believes the ad is an appalling example of exploitation and reverence. “When the cleaning lady says 'maa hone ka duty' (mother’s duty) – I hear obligation, and when she says 'mere bachon ke hisaab se main hamesha hi aage hoon' (My kids think I’m better than everyone) – I hear the misplaced self worth. Not every woman can and should have to carry the responsibility of career and family,” she said.

“We live in a sexist world where men working outside the home are seen as 'taking care' of their families whereas for women juggling their career and family are seen as two independent things where she has to constantly pour in her time and energy to seek validation of being a good mother,” Raheela added.

Several others felt like the advertisement hardly reflects reality but works as a way for the brand to cement its business positioning in small towns and cities by pandering to the patriarchal mindset.

“It looks like the brand is not exactly sure about what they want to convey but the main point is to sell their product…isliye behno bacche paida karti raho bhale hi khane ko khana na no, job mile na mile, tumhare dreams pure ho ya na ho (hence, the message to just birth children regardless of whether you have food on the table, a job, or your dreams are realised or not),” added Deep.

Manju Cimani, Co- Founder of Cocoatree Communications said that the ad’s messaging is indeed in the right space, reaffirming the fact that women can handle their career and home with equal felicity.

“But it's not a refreshing take. And if you closely observe, the women aren't very nice to each other. The corporate woman is shown as especially rude and fits into a cliche. The other pregnant lady who's a model gives respect only when she comes to know that the lady feeding the baby is a high ranking police official. While the message comes across reasonably well, it should have been executed with more finesse to suit the contemporary reality,” she added.

Referring to the brand idolising mothers who do not complain about the challenges of work and household responsibilities, Gituparna Sarma called it “women of culture” and “real feminism of India” on YouTube.

Another viewer, Sharma Jitendra commented, “This is the real culture of India.. a woman plays many roles in her life.”

(With inputs from Poorvi Gupta)