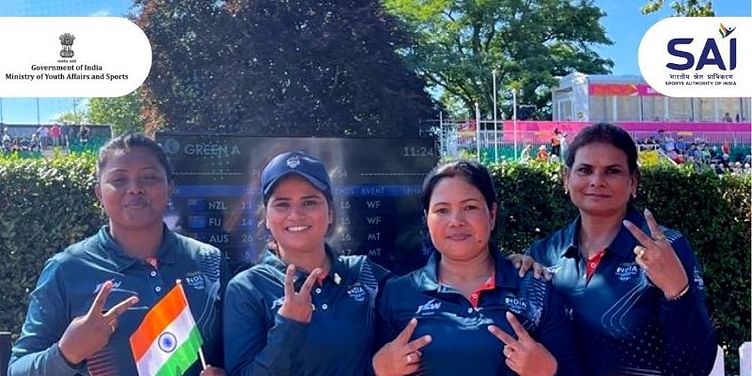 From Nikhat Zareen, Vinesh Phogat, Bhavina Patel, and Sakshi Malik to the Indian cricket and hockey teams, and more, Indian sportswomen at the Commonwealth Games 2022 are making the country proud with their remarkable achievements.

On Monday, August 8, the final day of the ongoing Commonwealth Games 2022 (CWG), badminton star PV Sindhu will compete in the finals of women’s singles against Canada’s Michelle Li.

At the ongoing CWG 2022 in Birmingham, England, India’s campaign has been stellar, with male and female achievers garnering medals after medals each day. After nine days, India is among the top five countries in the medal tally, which stands at 55 medals, including 18 gold, 15 silver, and 22 bronze medals.

Here’s a quick look at the Indian women making a mark in the international sports scene.

Nikhat Zareen is India’s pride. She is a world class athlete who is admired for her skills. I congratulate her on winning a Gold medal at the CWG. Excelling in various tournaments, she has shown great consistency. Best wishes for her future endeavours. #Cheer4India @nikhat_zareen pic.twitter.com/Wi6zRp26nU

Olympian Mirabai Chanu not only won India's first gold medal in the CWG in the women's 49 kg weightlifting final but also went on a record-smashing spree by claiming four medals in power-packed performances.

And what's more? Mirabai's success also sent Twitter into overdrive, when one of her fans tagged Thor star Chris Hemsworth, and he responded with - “She is worthy! Congrats. Saikhom, you legend.”

She is worthy! Congrats, Saikhom, you legend.

This was a historic win for India.

The team's win also saw search engines busy with the question "How is Lawns Bowls played?"

Bowls—also known as lawn bowls or lawn bowling—is a sport where slightly asymmetrical balls (called 'bowls') are rolled closer to a smaller white ball (called ‘jack’). The game has been part of the Commonwealth Games since its inaugural edition in 1930.

Belonging to the famed Phogat family, Vinesh scripted history by becoming the first Indian woman to win gold at both Commonwealth and Asian Games.

Nitu Ghangadas won India's first medal for boxing when she defeated home-favourite Demie-Jade in the women's 48 kg final. The 21-year-old from Haryana is a two-time world champion.

The Indian women's cricket team clinched the silver medal in the CWG 22. The Harmanpreet Kaur-led team met Australia in the finals in Birmingham on August 7, Sunday, but went down by nine runs.

It was the first-ever medal for the Indian cricket team at the Commonwealth Games.

Cricketer Jemimah Rodrigues on being dropped, her comeback, and more

From cricket, we move on to India's national sport hockey.

After 16 long years, the Indian women's hockey team saw its first medal when it defeated New Zealand to win the bronze medal.

The match stirred a huge controversy over a "clock error", but India managed to come out top in the shootout. Led by captain Savita Punia, the Indian team saw veteran player Rani Rampal left out of the squad due to injury concerns.

Treesa Jolly and Gayatri Gopichand clinched the bronze medal in the women’s doubles badminton playoff against Australia’s Gronya Somerville and Wendy Hsuan-Yu Chen. The duo, who were All-England Open semifinalists earlier this year, had a good run at the CWG.

Adding to India's bronze tally was also athlete Annu Rani, who clinched the third position in the women's javelin throw final. This was Annu's maiden CWG medal haul. She had earlier won a bronze at the 2014 Asian Games with a throw of 59.53m.

Race-walker Priyanka Goswami won a historic silver medal at the 10,000m women's race walk. Taking to the podium, one could hardly miss what Krishna devotee Priyanka was clutching in her left hand, a statue of Lord Krishna in his 'bal roop'.

Also clinching the silver was wrestler Anshu Malik, who defeated Sri Lanka's Nethmi Poruthotage in the women's freestyle 57 kg wrestling. The 20-year-old is a three-time medallist at the Asian Wrestling Championships.

Judo champion Tulika Maan's weight loss journey has been well scripted. At the CWG 2022, she went on to clinch the silver in Judo, when she defeated the highly rated New Zealand's Sydnee Andrews.

Also winning silver in Judo is Sushila Devi who participated in the 48 kg category. The 27-year-old Manipuri had previously won the silver medal at the CWG 2014 in Glasgow.

Popularly hailed as Mirabai 2.0, Bindyarani Devi, the 22-year-old weightlifter from Manipur, clinched the silver medal in the women's 55 kg weightlifting.

Indian weightlifter Harjinder Kaur’s bronze medal was India’s seventh medal in weightlifting at Birmingham. The 25-year-old from Mehas village near Nabha, Punjab, hails from a farming family. She is known to have built up her muscles by working on the chaffing machine at home.

Indian wrestlers have performed exceedingly well at the CWG 2022.

In the women's freestyle 50 kg category, wrestler Pooja Gehlot clinched the bronze medal. However, an emotional Pooja also apologised to her country as the National Anthem could not be played at the event. To this, Prime Minister Narendra Modi tweeted, "Pooja, your medal calls for celebrations, not an apology..."

Pooja, your medal calls for celebrations, not an apology. Your life journey motivates us, your success gladdens us. You are destined for great things ahead…keep shining! ⭐️ https://t.co/qQ4pldn1Ff

Wrestler Divya Kakran bagged a bronze medal when she came third in the women's freestyle 68 kg competition. However, more than her win, it was her tweet seeking help and financial recognition for her feat that gained attention.

Wrestler Sakshi Malik, who claimed a gold medal, defeated Ana Godinez Gonzalez of Canada in the final of the women's freestyle 62 kg category. The noted wrestler turned emotional as the National Anthem played, perhaps embodying every Indian's sentiments at the country's commendable run at Commonwealth Games 2022.

(This story was updated to reflect a new feature image)