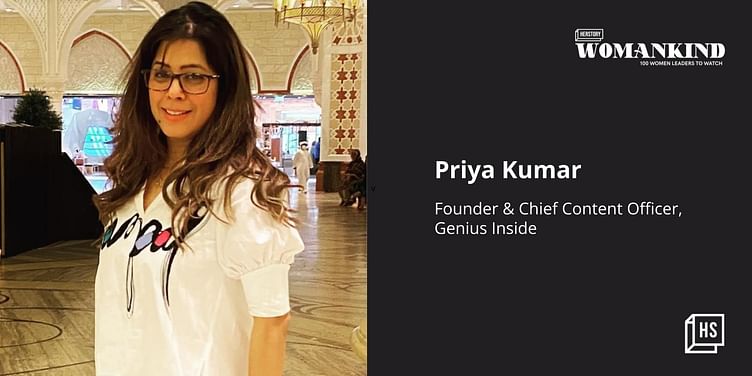 Priya Kumar is a motivational speaker, author and the founder of Genius Inside, an AI-powered e-learning platform for personality development.

Priya Kumar was an overachiever in school, but sometimes being smart and curious can make you an outcast.

“I was that annoying kid who asked too many questions, participated and won in every competition. But then my classmates began keeping their distance from me and I became a loner,” recalls Priya.

She decided to befriend people older than herself who, in turn, nurtured her thoughts and beliefs. Soon, she realised that she could use her knowledge to help others overcome their daily challenges and develop their personalities.

“Out of self-interest, I started my journey of helping others, and it reached a momentum, and there came a point when it became so big that I said, ‘Look, now I need to charge money for this," shares Priya, who started getting paid when she was 16 years old.

However, when Priya’s friends kept telling her that if her purpose was to make a difference in people's lives, why was she only catering to the corporate circle? The solution lay in going digital.

In 2021, with the help of the former CEO of Zee5, Tarun Katial, Priya co-founded ﻿Genius inside﻿, an AI-powered e-learning platform for personality development. It is rooted in the concepts of physical, mental, financial and spiritual wellbeing.

“I've been a motivational speaker for 26 years. As much as it is fun and glamorous, it also gives me the opportunity to add value to people's lives. The vision is to take our teaching, our learnings, our examples, out into the world, where I'm not just inviting you into a world of professional success, but also into a world of personal success,” shares Priya.

For Priya, both her age and gender created hurdles for her. As a young motivational speaker, her wisdom and advice were often questioned since wisdom is associated with age. She had to wear fake glasses to look older while speaking to the crowd.

Many also questioned if she was ever getting married and having a family.

“Some of the people told me that my career won’t last long because once I settle down, I will not have the luxury to travel around. They asked me to devote some time to find a good match to marry,” Priya adds.

Advising future women leaders, she says that their helping nature can make them great entrepreneurs.

“As women, we are natural problem-solvers. Because we can preempt things we will make for fantastic entrepreneurs. Let's use that skill not to hold us back but to push the business and the vision forward,” advises Priya.