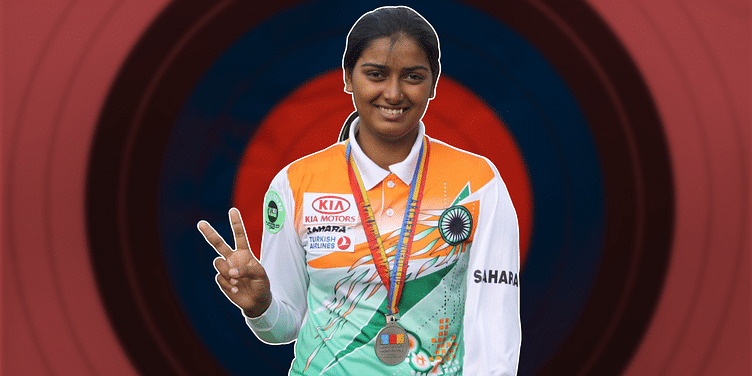 Deepika Kumari received the Arjuna Award, India’s second highest sporting award, in the year 2012. She was also honored with the Padma Shri in 2016.

Born to an auto rickshaw driver and a nurse, Deepika Kumari is from Ratu Chatti, a village 15 kms away from Ranchi. Her tryst with archery started when she used to aim for mangoes with stones. Since her parents couldn’t afford professional archery equipment, she had to make do with homemade bamboo bows and arrows.

Deepika’s life is an example of how someone from a less-than-privileged origin can turn it around with the help of hard work, unwavering confidence and self-belief. Coming from a family that barely had three meals a day, she got a chance to train at the Tata Archery Academy, which meant that there will always be food and shelter, a luxury for her then. She took up the sport after observing her cousin Vidya Kumari, who was a student at the academy. Vidya was the one who helped in honing her talent. This is where she trained with proper equipment and uniform. They even gave her a stipend of Rs 500.

Kumari is a recipient of the Arjuna Award, India’s second highest sporting award, in the year 2012. She was also honored with the Padma Shri in 2016. Deepika was announced as the FICCI Sportsperson of the Year Award in 2014.

She became famous in the world of Archery when she won the Cadet World Championship in 2009. She also won the 11th Youth World Archery Championship in Ogden, USA in the same year. Deepika won her first World Cup individual stage recurve gold medal at Turkey in 2012. In the end of 2012, she would go on to become the World Number 1 in Women’s Recurve Archery.

Today, she is ranked World No 9 in the field of archery and was even the world number one at one point. She won a gold medal in the 2010 Commonwealth Olympic games in the women’s individual recurve event. Kumari competed in the Women’s individual and Women’s team events at the 2012 Summer Olympics in London where she finished at the eighth position in the team event.

“I have two coaches, Dharmendra Tewari and Purnima Mahato, these two have trained me from the time I joined the Tata Archery Academy. My coaches not only trained me in archery but have also trained me to handle life. For example, when they teach us about confidence in archery, it applies to my life as well. It was that confidence which helped me perform in front of a crowd or talk to people I didn’t know. All the principles I acquire as a sportsperson automatically apply to my personal life as well,” she said in an interview with Scroll.in.

A documentary on her life, Ladies First, was released in 2017. The movie even won an award at the London Independent Film Festival and was also submitted for the Short Documentary category at the Oscars.

She was even approached for a movie role but turned down the offer when she realized it would clash with her archery plans. “I realised if I plunged into the world of celluloid, I would lose focus on archery. It was an important year and I desperately wanted to turn around my fortunes in the sport. So, I finally rejected the offer,” she added.

“As such, difficulty in playing and performance does not occur. But there are times when I am not able to perform well. That affects the way people perceive me. They either get negative or stop talking to me. They question my work; complain that I am not working hard enough, that I do not have enough focus. They say I don’t concentrate, and that’s why my performance is dipping. They start questioning and doubting whether I will win medals again. What they don’t realise is that this is a sport and no one person can win every single time or perform the same always,” Deepika reflects on her failures.

How this intimate apparel factory manufacturing for the likes of Victoria’s Secret and Calvin Klein is empowering 18,000 women in rural Andhra Pradesh

My experience as a solo backpacker in India