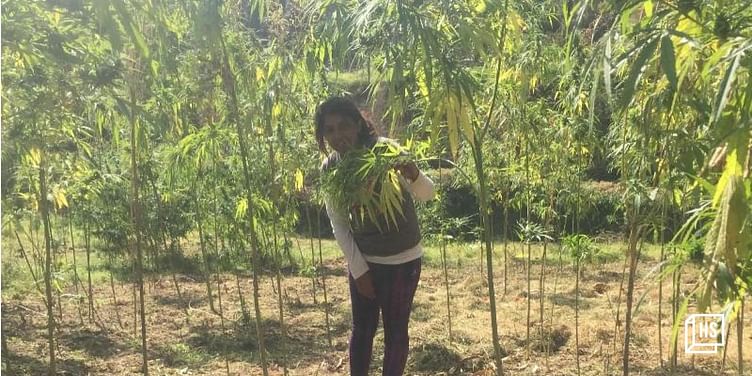 Shibani Shetty launched LESS to create products and services originating in natural hemp. The entrepreneur has collaborated with Araku Coffee and a Vedic resort in Goa with her interest in hemp.

Travelling across Southeast Asia while doing her master’s in Singapore, Shibani Shetty, 30, realised two things–the many benefits of hemp and how countries like Nepal and China had a long history of cultivating it.

Once back in India, Shibani had a brief stint in advertising before starting to delve deep into the environment-friendly aspects of hemp. The more she learned and experimented with the plant, the more she was convinced that hemp had all the hallmarks of being a movement rather than a mere business venture.

Shibani, who started Bengaluru-based LESS in 2018, says, “LESS is a community with a pro-environment soul, and we want to create products and services that have their origin in natural hemp. Thanks to its natural heartiness, hemp doesn’t require any chemical pesticides or fertilisers, which makes it safer for both the farmers as well as the land.”

“We started with hemp fabric as during my travels across Nepal, China, and a few other places, we realised these places were cultivating hemp for industrial uses for a long time. We got one of the yarns from Yunan and weaved it here. It turned out to be one of the best 100% hemp fabrics we had ever tried,” says Shibani in a conversation with HerStory.

Industrial hemp or hemp is a variety of cannabis sativa plant species that are specially grown for commercial purposes.

One plant, many uses

In 2018, LESS began by making men’s shirts. But since it was a niche market, the young entrepreneur soon moved to the skincare space. Incidentally, 2018 was also the year when Uttarakhand became the first state in the country to allow the commercial cultivation of hemp.

“Hemp oil has a lot of benefits for the skin, so we started making skincare with the idea of it being chemical-free. We wanted to ensure our consumers got the best of the natural ingredients,” narrates Shibani. LESS skincare’s product line currently includes a serum, lip salve, soaps, and hair oil, and they all have hemp oil as their main ingredient.

The firm recently launched a project with Araku Coffee, capitalising on the benefits of both hemp and coffee. LESS has also experimented with multipurpose skincare candles in three different flavours. The candles are designed to melt into luxurious oil at body temperature, which can then be poured and massaged into the skin.

Shibani vouches their skincare range is what has been working best, so much so that it has inspired the founder to explore partnerships with spas and luxury hotels. Recently, LESS tied up with designer boutique resort 3102bce in Vagator, Goa, and Shibani touts it to be the first all-hemp spa in India.

Besides skincare, the brand is also into hemp nutrition and has introduced a couple of products in the form of readymade mixes. The hemp brownie mix by LESS has whole wheat flour, cocoa, hemp powder, natural raw sugar, cornflour, baking powder, and salt. According to Shibani, “It is an easy three-minute mix that can be blended together with your choice of milk, making it vegan-friendly as well.”

LESS’ skincare and nutrition products are priced between Rs 199 to Rs 1500, whereas the clothing range is priced between Rs 2500 to Rs 4999. On competition in the sector, Shibani says she doesn't consider anybody as competition because the industry is still nascent in India. “We need 100 more companies to reach out to the entire target audience and remove whatever stigma there is surrounding hemp. Once we reach the market and create the industry, that’s when the competition starts.”

Not marijuana, this company clears the air around industrial application of Hemp

From the hills to communities

Shibani sources hemp seeds from Uttarakhand, which are then cold pressed into hemp oil in Bengaluru, where the rest of the skincare products are made in small batches. "I wanted to create a community of women who can learn a skill, and use it to earn their living. Tomorrow, any brand can go to them to make soaps or serums."

The company makes multipurpose candles in Noida because it's easier logistically, and LESS fabrics, with the yarn sourced from various parts of Southeast Asia, are made into sustainable clothing in India’s textile capital Tirupur.

While researching fabrics in Tirupur, Shibani also learned more about other natural fibres like orange, lotus, and bamboo. “When I did a short course in Milan, we had just started exploring mushroom and orange fibres. Later, I saw that Tirupur had already cracked that space!” Shibani exclaims.

Looking at medical cannabis as the next step in her venture, Shibani is waiting for the Indian government to “get a little easier on the regulations so that we can actually get more doctors on board.”

Stating that there is an urgent need to create more awareness of hemp and how it can play a balancing role in a regular diet, she says LESS is also exploring collaborations in the pet space.

“Hemp oil is common in the veterinary space, but we want to make it easier for pet parents to use hemp products for pets–be it treats or tick sprays. We’re still exploring that space though…” concludes Shibani.

How this intimate apparel factory manufacturing for the likes of Victoria’s Secret and Calvin Klein is empowering 18,000 women in rural Andhra Pradesh

In times of coronavirus, inspirational quotes that will help you understand, ‘this too shall pass’