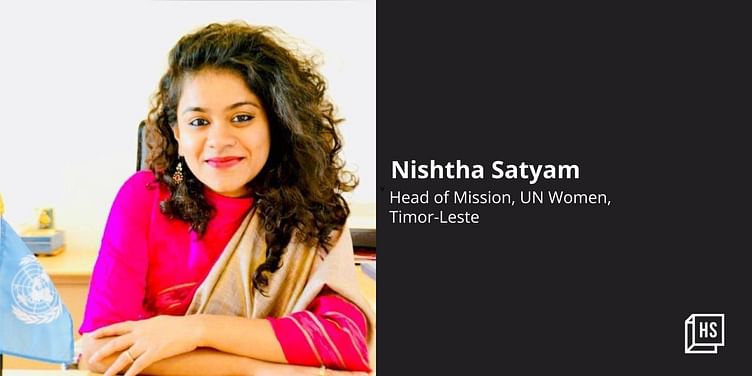 In this week’s Women in Leadership series, we speak to Nishtha Satyam, whose journey to the upper echelons of UN Women is nothing short of an inspiration.

Nishtha Satyam is the Head of Mission, UN Women in Timor Leste (East Timor). On a balmy but breezy evening, Nishtha sits down for a Zoom interview from the Southeast Asian nation, and in the background, there is that distinctive sound of splashing waves.

“I’m sitting outside but if it’s uncomfortably noisy, do let me know,” she says in a chat with HerStory, her tone both friendly and emphatic at the same time.

At 37, she is the youngest woman to head a country office for UN Women when she took her position in Timor-Leste in September 2021.

An unapologetic feminist and a trained economist, Nishtha recalls how growing up in Delhi with a development economist father and a schoolteacher mother brought together two different perspectives at a young age.

“My father had gone out to study and had a worldview that was much beyond us - about cities, literature, and poetry. My mother, on the other hand, always had a very inward-looking viewpoint – always instilling that no matter who you are or how much money you have, you must be a good person,” says Nishtha, whose first appointment with the UN was as the Private Sector Partnerships Specialist with the Office of the Resident Coordinator of the United Nations and UNDP.

Determined to start working early, Nishtha joined American Express as an analyst soon after her graduation, and worked with a couple of corporates, including KPMG, before joining the UN in 2012.

Throughout this interview, Nishtha’s love for poetry is evident in the way she easily intersperses her experiences with verses.

“I was earning well and could see a clear career path as well, but I simply didn’t find meaning in what I was doing. Like Tagore famously sang, ‘I may not have been playing the song that I came to sing,’ I had a very clear feeling in my heart that I was not singing the song that I was meant to sing,” Nishtha says.

She recalls working for the UN was a long-held fascination that saw its origin when she visited the UN building on a trip to New York as a child, and yet a dream that remained unfulfilled until her late 20s.

“One day I just randomly went to the UN website, and applied for the first job that I saw. It did have something to do with what I was doing, but I was very surprised when I got a call.”

In the panel interview that followed, an economist for the UN, a middle-aged lady, asked Nishtha if she was sure she wanted to work for a bureaucracy when she was clearly doing so well in the private sector.

Nishtha says, “She asked me, ‘You're so smart. Why do you want to work for the UN?’ And I replied, ‘If I’m really, then I should work for the UN!’  It was something that I was telling myself.”

Nishtha didn’t get that job, but kept following up, applying to every other suitable position that was open at the UN. She finally hit the right job advert, and bagged the role of a private sector advisor in September 2012, although it took another two years before her quest for finding a meaningful role saw the light of day in UN Women.

“I saw their mandate, and I could identify and resonate so much with everything that I immediately felt validated.”

At the time, UN Women in India was a multi-country office in charge of India, Bhutan, Maldives, and Sri Lanka.

Being the first Indian to head UN Women in the host country, and as the youngest woman to head a country office for UN Women amongst 193 countries, Nishtha was breaking many barriers at the same time, and simultaneously creating new milestones for herself and the organisation, an experience she terms as “very close to my heart”.

Currently, as a Head of Office at Timor-Leste, Nishtha says no two days are similar, and “this is where it gets exciting”.

“Be it meeting the president or a minister or a woman on the ground, what I’ve realised is that people's issues are all very different and similar at the same time.  And somehow, it all connects, the worldview that they have, the challenges that we talk about, and that's the beauty of working together…the people all have the same stories.”

When asked about the challenges she has overcome in her professional journey, she points to the everyday trials of working in a bureaucracy, sometimes too slow, sometimes too old-fashioned.

“Sometimes you're the youngest so people look at you with a certain level of resistance. But at the same time, I think it's so beautiful that you're in this giant ship that doesn't move, but when it moves, it moves quite significantly and makes the waves that it does, so I value where I am,” she remarks.

She feels the challenges for any woman in leadership are typical - gender stereotypes that are all-pervasive. “Look at what the Finland prime minister is going through! If you want to be taken seriously, you can’t be seen partying or with red nails,” she laughs.

On her experience leading women in Timor, she says it’s been more of a learning for herself.

“When you land in Timor, you see these beautiful crystal-clear waters. You see this island and think that this is truly God's own creation. And then as you go deeper, you see the complexities of a post-conflict setting, and the resilience and strength with which people have lived that trauma.

“It is not uncommon to speak to a woman here who has lost a son, brother, or husband to war, and who has no closure on what has happened. But they are still working 15-hour working shifts, getting up early and carrying on in life.”

Lessons in leadership and more

Recalling her days working for Corporate Executive Board (CEB), a company (now a part of Gartner) that provides best practice research, benchmarks, and decision support tools to business leaders, Nishtha recounts an experience that set the tone of her leadership style.

“Very early in my career, when I was setting up a meeting for my boss, I met this gentleman named Robert Hampshire from Walmart who asked me if I would be answering his questions. I laughed and told him that I couldn’t, and he responds, ‘I want you to think of people (and leaders) as human beings who are limited in their knowledge, no matter who they are. They are limited in their skills, and sometimes even limited in logic because they're not so close to the situation on the ground.’ That taught me that to be in awe of a person is to not demoralise yourself,” Nishtha says.

Seeing women in her team start believing in themselves and agreeing to disagree is a big high, and something that she learnt from big names in the UN body – Lakshmi Puri and Rebecca Reichmann Tavares.

“That's one gift and learning they gave me, that as leaders you cannot keep people occupied with being there to please you. It may be uncomfortable for me as a leader at that point, I may feel challenged, but women presenting their voices at the table is really my greatest high,” she remarks.

In this journey of reaching the upper echelons of an entity that is working for gender equality and the empowerment of women, whom does she count as her role model?

“My mother,” pat comes the reply, as she adds, “One thing I learnt from my mother was that you can be a star without being in front of the curtain all the time. She never cared about applause, and she was the one person who always had a love for me no matter where I was in life.”