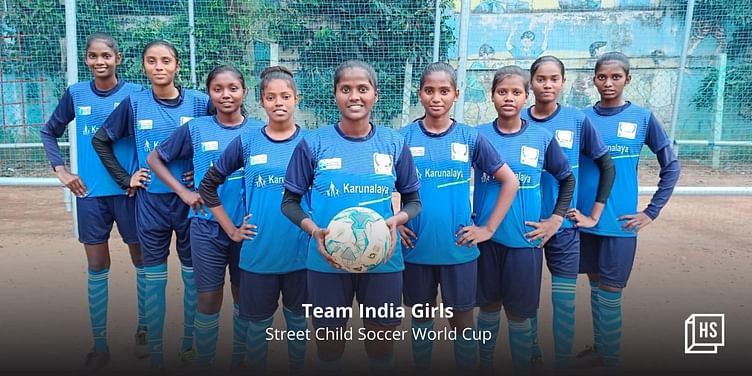 Close on the heels of the FIFA World Cup, there is yet another world cup that is generating quite a buzz--the 4th Street Child Soccer World Cup currently happening in Doha. The event is organised by Street Child United, a UK-based non-profit organisation.

In 2015, S Sandhiya was just another street child who huddled with her mother and sisters in the bustling Koyambedu area in Chennai. Nowhere else to call home, Sandhiya and her five sisters had taken to roaming around the local market, picking up vegetables and selling them to earn money. At night, they slept in the market area, often jolted awake by the sights and sounds of the streets and skies.

Through all those sleepless nights under the stars, not once did Sandhiya dream that seven years later, she would be boarding a flight to Doha as the captain of a football team, representing India in the Street Child Football World Cup.

The fourth edition of the Street Child World Cup (SCWC), hosted in partnership with Qatar Foundation, is taking place in Doha from October 7 to 15, 2022. Representing India are nine girls from Chennai, who are all part of Karunalaya, a shelter home for street children.

The event is organised by Street Child United, a UK-based non-profit organisation, on the sidelines of FIFA, to bring into focus the challenges faced by millions of street children around the world. Organised a month ahead of the FIFA World Cup, the SCWC will unite street children from nearly 24 countries comprising Brazil, Bangladesh, Bolivia, Colombia, India, Indonesia, Mexico, Palestine, Peru, Philippines, USA, Zimbabwe, Bosnia and Herzegovina, Burundi, Egypt, England, Hungary, Mauritius, Nepal, Pakistan, Qatar, and others.

“While sitting inside the plane, I was amazed at what I saw around me. I was excited when the flight started moving, but also nervous whenever the flight had some bumps due to clouds,” says Sandhiya on her first flight journey ever.

She says she got a clue that she may be a part of the team when the authorities at the NGO started applying for her passport, but being made the captain was a complete surprise. “I was so happy to hear that,” she exclaims.

Currently studying in Class 12, Sandhiya has been playing the game for many years now, as the sport is a big part of the training and coaching offered by Karunalaya to its beneficiaries. Besides being a defender, she is also a good dancer and a scouts leader.

“I like to defend, shoot the ball, and use my left leg. I love to cheer and encourage my teammates,” says Sandhiya. The teammates all have similar stories of triumph over struggle, and for each one of them, being a part of the team is a matter of pride.

Take 17-year-old Priya for instance, who has never seen her parents since birth. Since childhood, she has been living in multiple orphanages with her little brother, and was finally brought to Karunalaya after a concerned well-wisher intervened.

On her experience in Doha, she says she has already made new friends from other countries like Brazil, Burundi, and the Philippines. “I wake up at 5 am, get ready, and have breakfast by 7.15 am. Then we go to the venue, attend various sessions, and also enjoy dancing and mingling with other children,” says Priya.

Passports for the identity-less

N Paul Sunder Singh, Founder and Secretary of Karunalaya Social Service Society, says, the children, all of whom come from marginalised communities, have been undergoing training with special coaches for the last six months. However, the biggest challenge for Karunalaya was getting their passports.

“Getting a passport was a major concern as some of the girls did not have birth certificates, and their parents did not have the necessary ID proofs to apply. We had to first get IDs for the parents, and then for the children, before applying for the passport. It took over a year to complete the process and get a passport,” says Paul.

The team is being accompanied by three adults, including Paul, who is the team leader; the manager and caretaker of the girls, Grace Beryl Christy; and coach Aldroy.

“Once the girls return from Doha, they will continue their education and their sports practice, and also participate in local football tournaments. They will share their stories and experiences with other street children to inspire them and help them achieve their dreams,” says Paul.

Besides the girls’ team, Team India Boys, comprising 10 boys selected from over 300 who participated in Jalandhar-based NGO YFC Rurka Kalan’s trials for the SCWC 22, are also participating in the event in Doha. The boys, most from financially deprived backgrounds, have one thing in common–their love for football and belief in the power of sports!

MyySports, a sports-tech startup building a grassroots sports platform for India and by India, is the official streaming partner of the event.

Shishir Hattangadi, former Indian first-class cricketer, and President, Distribution & Alliances, MyySports, says, “Women have elevated sports at the global level. The success of women in cricket, hockey, and athletics is evident, and the girl child is making a serious impact on the sporting diaspora. This is inspiring for future generations.”

As the International Day of the Girl Child is being marked across the world, there is no better testament to this than the brave stories of these inspiring girls from Chennai.