What teens think is cool - Gen Z in India

The purpose of this study is to provide an insight into the world of teens in India on what they find is cool. An online survey was designed and data of around 1130 teens was collected across eight major cities in India. The study identifies top 100 brands in India based on two parameters i.e Coolness and Awareness. The results also show that brands from e-commerce and social media companies tops the list followed by fashion and food industry.

Cool is a state of mind. It is an expression of admiration or approval. The idea of being cool may vary across generations. People might relate it to as a state of being, as a behavioral characteristic, an aesthetic appeal or as a fashion trend. This paper is based upon a study conducted by Google Inc in USA in 2016. The purpose of this study is to provide an insight into the world of teens in India on what they find is cool. An online survey was designed and data of around 1130 teens was collected across eight major cities in India. The study identifies top 100 brands in India based on two parameters i.e Coolness and Awareness. The results also show that brands from e-commerce and social media companies tops the list followed by fashion and apparel industry.

There is no agreement on the exact definition of Generation Z. Many classify Gen Z as those born between the mid-1990s to the end of the first decade of the millennium. For the purpose of analysis, this study refers to as Generation Z, all those who were born between 1998 and 2004 – that is, those who are presently between 13 to 19 years of age. With close to 356 million (2016), India has the world's largest gen Z population and holds tremendous potential for future.

As per a report by Google, they defined cool as an indication of what people pay attention to, what gets them excited, and can often act as a manifestation of their hope and dreams. Teens feel something is cool if it’s unique, impressive, interesting, amazing or awesome. Something becomes “cool” when it brings joy or happiness or is unique enough to stand out from everything .

An online survey was designed and rolled out to around 3000 teens across eight major cities in India. Out of the total sample, 1130 teens, aged between 13-19 years (Table 1) completed the survey. Based on the survey, top 100 brands were identified and in the subsequent stage, these 100 brands were measured on two parameters. (1) Coolness - Whether teens feel about how cool a brand is and (2) Awareness: How much aware are teens towards a particular brand. 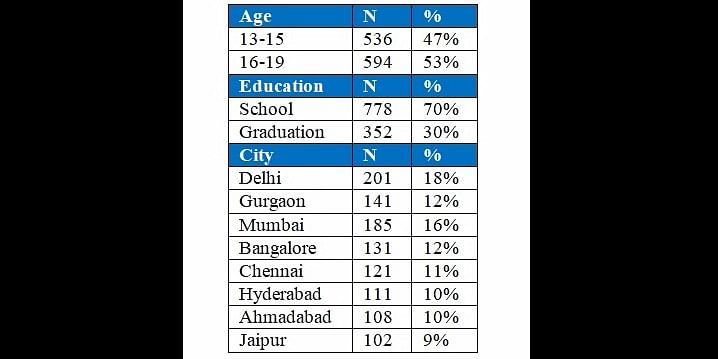 The 100 brands as identified by teens are shows in Figure 1. Brands are plotted based on coolness and awareness. These brands are further divided into sub categories, as shown in Table 2. 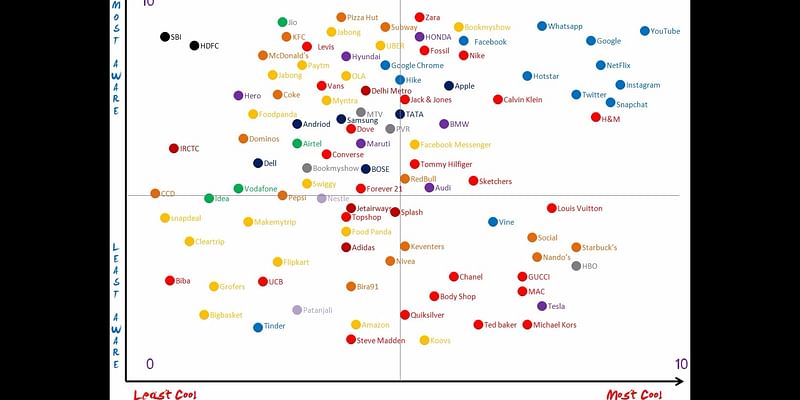 What did we found

2. Social Media is for stalking and not sharing

It was seen in the study that the percentage of teens stalking others is way higher as compared to the one's posting pictures or checkin's. Teens use instagram and facebook primarily to view others activities, specially pictures.

3. Uber is cooler for Gen Z

As per the survey, Uber is cooler for Gen Z as compared to any other service provider in the same category. It can also be due to the fact that their parents are Uber users and brand recall of Uber is better than any other player in the market.

4. Jio - Brand recognition in no time

Jio was commercially launched in Sept 2016 and in less than a year's time, it has taken the market by storm. Jio has come out to be a surprise entry in the list of top 100 brands. Jio has one of the highest brand recalls and tops the list in comparison to any other player in the market. The marketing for Jio and the plans/offers provided by Jio did the magic, at least for the Gen Z in India. One in every five teen have a Jio connection.

5. Android is ahead of iPhone in Gen Z

Of the teens surveyed, 75% of the teens are on android and 20 % of teens have an iPhone. Having an iPhone is no longer considered cooler in Gen Z as they feel that it is no value for money.

6. Fashion and Apparel leads the way

About 27 of the companies from the top 100 are from the Fashion and Apparel segment. Fashion and Apparel is the single largest category for teenagers , accounting for 32% of their spending, followed by food, which accounts for 31%. Nike is the top shoe brand whereas H&M is the hot favourite for males as well as females.

7. Food and Beverages is the new entrant

Food and Beverages segment is the new entrant in terms of spending. Starbuck's is the top choice along with Nando's and Social. The amount of money, teens are spending over food and beverages is extravagant and will soon surpass Fashion and Apparel segment.

8. Indoor activities is cooler than outdoor

Time spent in local shops or malls has been declining, whereas online shopping has been growing, with Amazon now ranking as teens' top online retailer. Nike remains the favorite clothing brand, with H&M, Jack and Jones and Forever 21 next in line.

Gen Z are well informed and connected. They are ambitious, engaged and feel that they can change the world. There thought process is way different as compared to any other generation and the same is reflected in their ideology. They value information and connection, evident by their affinity towards Online and Social Media platforms. They also have high expectations for the brands they choose. As professional, these things should be seen as opportunities to live up to the standard Gen Z has set for and to continue to inform, inspire, and create products that influence Gen Z.