Freedom 251 Should Ring a Bell

Yes, finally the did it. Ringing Bells have done it which no other company on earth did. A smartphone at a price of Rs. 251 or less than $40. Wow! Now that’s a head turner. And yes, it is actually a smartphone with touch screen and camera. The exact said specifications (as per their official website) are: 4.0" qHD IPS Display, 1 GB RAM & 1.3GHz Quad core processor, 3.2 MP Rear & 0.3 MP Front Camera, 3G Support, 1450 mAh battery, with 1 Year Manufacturer's Warranty. It comes with Android Lollipop, which comes with a lot of latest smartphones from top Indian and foreign brands. To our surprise, they have also included regular accessories in the box ie. Battery x 1, Charger x 1, Headset x 1, User Manual x 1, USB Data Cable x 1. Yes , you got it right, a headset in include, which is not there in the budget-oriented smartphones, from Xiaomi, Meizu, Zenfone, and a lot other Top Online- only Selling brands.

One of my friends has received a retail unit. A little bit of workaround is being done to get to a complete overview of the phone. Few other people have already tested it and the only problem that I have noticed is with the ROM or the internal memory which was said to be 8 GB but, you get approximately 1 GB for usage. Well, I would say I can forgo that considering the price point. I mean you can’t even get a good KFC chicken bucket for that price. All other specs are so far correct. So let's talk business now, how they have made it?

To understand this, let us analyse the strategy, the company and how the cellular and telecom sector works.

Ringing Bells is a 2015 established company which is into design and production of a smartphone. Ringing Bells Pvt Ltd has a complete in-house product testing set-up in India. As per their President Mr. Chaddha and MD Mr. Mohit, the company has the aim to empower the rural India with digital power of the internet. They see a 2 Cr. Phone sales market per month in the country. Out of which approximate 70% is bought in rural India are not smartphones. They precisely want to replace these feature phones with smartphones and hence empowering the rural Indian consumer by giving access to the internet, advanced usage and connectivity to the world around them. Earlier in Feb this year, the Noida-based firm, set up a few months ago by Amity University graduate Mohit Kumar Goel, launched the Freedom 251 at a high-profile function, attended by BJP veteran Murli Manohar Joshi, thus making the brand more trustworthy. However, they never claimed to receive any govt. aid under any scheme.

What’s in the Box- In Depth

Explaining the price, the President of the company Mr. Ashok Chaddha clarified, the manufacturing cost of the phone is Rs 2,500, which is in good health considering a series of measures like economies of scale, innovative marketing, reduction in duties and creating an e-commerce marketplace. The phone is said to be manufactured in Noida and Uttaranchal. At the launch event, the company provided an inexpensive phone from another manufacturer ADCOM. But the retail unit is completely new, in terms of built quality, design, and specifications. It has got Ringing Bells logo all around and inside as well, which is enough to consider the phone is actually manufactured and not contract manufactured. Let us now see how the costing and pricing work as per the company representative. By the analysis (see the table), the price shouldn’t be less than Rs. 660-700, if at all the said conditions are true and eventually the estimations stand well as expected. But still, there is a price difference of Rs.409-449. The company has reportedly informed to take a loss of min Rs. 160-160 per unit. They say they are doing this to make the digital media dream come true. The MD of the company has written a letter to the prime minister to grant Rs. 50000 Cr. to make this dream happen for a larger urban audience. 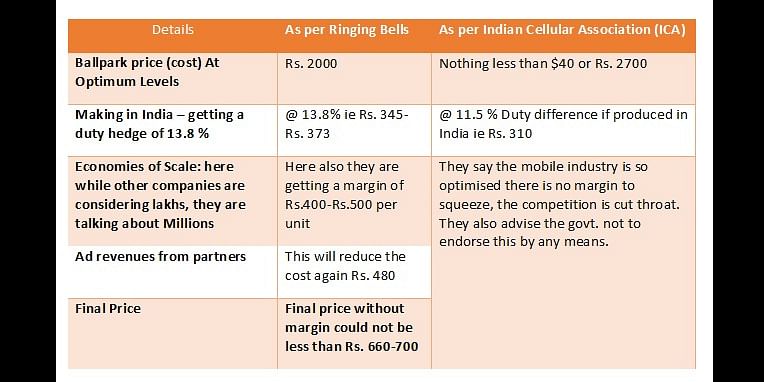 Apparently, the company promised to ship a total of 50 lakh phones via online and offline sale model, which is far away. The initial two lots (5000 and 65000) were shipped in July and Aug and people received it 1 -2 months later as was promised to be delivered by 30 June this year. The dream of so-called “digital India” is remote for the visionaries at Ringing Bell.

What I Learn from The Whole Episode

Many would have taken this very lightly when this was launched. But it seems that they have come out with flying colour. Well, I don’t completely agree with this. I make out 2 possible concepts from this

A Big Time Gimmick: To get attention and market reach, they took a big leap in the world of cellular phones. A small company based out of North India, having a background in a commodity business, started a budget mobile manufacturing company to disrupt the industry. Having sold few budget handsets in the category of 2500-4500, they went to offer a flagship phone under $4, which is almost 90% less priced than their previous least priced phone. Well, all these for the digital India dream? This could be an advertising gimmick or a rampant brand building exercise. This kind of tricks have been done in various industries in recent times, but given the kind of pricing, it could lead to a blasphemous campaign.

Or, on a good note, it could be India’s most disruptive mobile start-up of the decade, of course, conditions do apply. If govt. considers the rational plan for making digital India dream come true, the subsidised mobile brand can be marketed further in the urban and semi-urban India. Coupled with various small internet tariff plans from BSNL, MTNL, it could really lead to a revolution. However, the fact of the matter remains that the bill of a material having no relation with the MRP of the product. In this scenario, we have to wait and watch, whether Ringing Bell delivers the so called 50 lakh phones? Will they get any govt. support? Or do they just pay back the money they received for 7.5 Cr such devices to their respective potential buyers?

From another angle, this could be a big lesson for start-up founders across the nation. Maybe giants like Reliance can play the “penetration pricing” card, sitting on a huge cash pile, but smaller companies need to have that backup to make such an audacious promise. Pricing id the key in the consumer market, but to build the brand you can’t rule out the odds and the extremes. 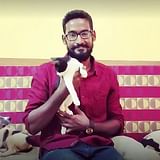 Meet the vet who helps abandoned and stray pets find a new home!

How to stop wasting time and be more productive?