“Women cannot be pilots.” “Americans are too loud.” “Men should not cry.” “Irishmen are always drunk.” “Indian cuisine is all about butter chicken.” “Cats are mean and evil.” We have woven around ourselves a network of stereotypes and judgments, which we often justify under the garb of ‘normal and acceptable.’ Yet another stereotype has mushroomed over the years and is one that I find amusingly outrageous.

Remember the bona fide genius in your class who was often bullied or called a ‘nerd’ or ‘geek?’ The one who was going to spend all eternity in a laboratory and eventually die of loneliness? Or the one who romanced the computer screen and did not ‘have a life?’ Even the one who had random epiphanies or crazy ideas and was a ‘legitimate lunatic?’ The techie who played around with scrap and built ‘irrelevant stuff?’ The list is endless and so is the abyss that we are drowning into when we associate innovation and creativity with compulsive contrarianism and social exclusion.

However, there are people who surpassed all impediments and nurtured their fecund imagination; who were not hectored by the uncertainty of circumstances and trusted their gut. They not only became pioneers in their respective fields but also put themselves on the map. Bringing to you a list (alphabetical) of tech innovators who expanded their horizons and went on to become industry leaders – 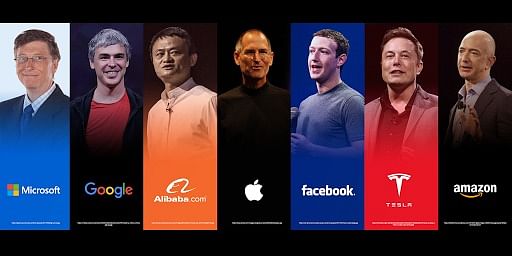 The Seven Kingdoms of WESTechEROS

The founder of the Microsoft Corporation, Bill Gates has carved a niche for himself in the array of the world’s most successful businessmen, world’s top tech entrepreneurs, and the world’s richest, most venerable and charitable people. His stint with programming began when he was in eighth grade and wrote code to implement the game of tic-tac-toe. From that to dropping out of Harvard to start his own company with childhood friend Paul Allen, Gates is truly self-made. Microsoft began as an operating system business in 1980 but has diversified in unprecedented ways to become the world’s largest software-making company with revenue of over US$ 89 billion.

While people have to unlock the door and step out of the box to think creatively, this visionary builds a palm-sized box to solve his purpose. Needless to say, with ventures like SpaceX, Tesla Inc., PayPal and Neuralink in the bag, he is the Thomas Alva Edison of the 21st century indeed. With a net worth of over US$20 billion, Elon Musk has transformed the way we think about technology.

He was rejected from 30 jobs. He was denied admission by Harvard 10 times. He was the only applicant who was not accepted by KFC out of a total of twenty four applicants. Today, he is invited to lecture at Harvard University. He pledges to create 1 million new jobs in United States by 2021 and his business enterprise generates more revenue than KFC. His journey began with ‘China Yellow Pages,’ a company he built with his wife to create websites for other companies. But he neared the acme of his career when he quit the China International Electronic Commerce Center to found Alibaba in his apartment with a group of friends. Jack Ma, the founder and executive chairman of Alibaba Group, is among the world’s most influential people and serves as an inspiration to millions.

The world’s wealthiest person, Jeff Bezos drove a Honda even after becoming a billionaire and he still does the dishes every night. He schedules his meetings such that they do not infiltrate family quality time and starts his day by having breakfast with his wife. An epitome of work-life balance, Bezos jotted down the concept of Amazon during while driving from New York to Seattle and started the company in his garage. The juggernaut of this company rings from household to household and has entered arenas ranging from internet retail to production of consumer electronics like Amazon Kindle and Amazon Echo.

While the twentieth century faced the Cold War, it also witnessed the warmest association between United States and Russia. The invincible duo of Larry Page and Sergey Brin founded the tech giant, Google LLC in 1998. They began with a mission to ‘organize the world’s information and make it universally accessible and useful’ but the pair has conquered much more than intended. From the most powerful search engine to Gmail, from Google Maps to YouTube, from PageRank to Chrome web browser, from Google+ to the Android operating system, Google has morphed into an octopus – spreading its arms in multifold directions. Together, Larry Page and Sergey Brin own 14% of the company’s shares and have a combined worth of over US$100 billion.

This programming prodigy created Facebook out of thin air. His ludicrous alternate version of ‘Hot or Not’ gave him an inkling that that led him to build this multibillion-dollar company. He believes that the biggest risk is not taking any risk and this is evidenced by the fact that he dropped out of Harvard to build his infant social media platform, which went on to become the largest social networking site in the world. Facebook has over 2 billion monthly active users and the company went on to acquire Instagram and Whatsapp in 2012 and 2014 respectively. When asked how it all happened, Zuckerberg says that the real story is probably pretty boring for they just sat at their computers for six years and coded.

One of the most sagacious CEOs of all time, Steve Jobs was named the most powerful person in business in 2007 by Fortune magazine. With friends Steve Wozniak and Ronald Wayne, he established the behemoth company, Apple Inc. from the garage of his house in Los Altos. With over 300,000 employees, 400 global stores and a billion active device users all over the world, Apple is the largest information technology company with revenue of over US$229 billion. However, its beauty lies in the fact that with its origination, the founding fathers set forth a digital revolution that has formed the basis of IT consumerization.

My team and I are avid seekers of technology. We would be delighted to know about what you've been doing to contribute to this evolving madness. Feel free to strike a conversation with us.