How to Hire Flutter App Developers? Streamline your hiring process 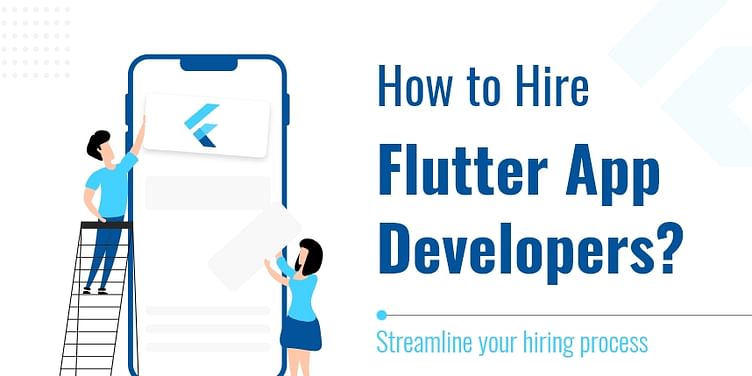 Why do you want to hire Flutter app developers over any other developers?

It must be your first question to be answered before commencing any hiring process or taking interviews. Given that everyone has a different purpose and there is a different way to fulfill each purpose. Some hire for developing an cross-platform app to save money, some for scaling up their current developers’ team, and software companies hire Flutter developers to cater to their client projects.

So, what is your sole purpose?

Mobile app development is a highly potential solution that holds numerous benefits for every business unit. It enables you to visualize your ideas and implement them real quick. Ahead of everything, the cross-platform app development and its cost-effectiveness open up the door for the people with brilliant ideas but less capital. Flutter is one of the cross-platform SDK and so hiring remote, full-time, or in-house Flutter developers is a good idea.

If you are a software development company, then you must hire Flutter developers. Because Flutter is the best to develop iOS and Android apps simultaneously with sustaining native apps touch. It has already captured big companies' attention by its rapid, accurate, and beautiful development solutions.

The capacity for designing and developing complex projects with Flutter is above and beyond the others. Your company could vigorously thrive with talented Flutter developers. Nevertheless, it is a new SDK, so it can be challenging to uncover developers' potential for Flutter.

The blog is created to overcome such challenges. In this blog, we are discussing engineers' crucial skills, responsibilities, and other meaningful aspects.

Before you get confused between Flutter and other developers' responsibilities and skills, let us clarify it.

Shedding lights on Flutter developers for hire, you must know Flutter itself is a novice to mobile app development and barely three years old. Consequently, there are no developers with high experience in Flutter. Hold on; there is nothing to be afraid of.

Well, your project requirements matter a lot in hiring developers. In some cases, despite less experience, junior developers possess the required skills for your project. However, their speed of working and learning the Flutter framework tends to be slower than experienced developers. In contrast, practiced developers can learn and execute the task faster and cater to big and complex projects.

Flutter is full of beautiful UI widgets and packages. Hence, Flutter developers for hire must be able to design and create sophisticated cross-platform apps. They should be able to focus on the project requirements and predict possible bugs to prevent them.

Flutter developers must know Dart as it’s the primary language to write code in Flutter. Developers should write clean and readable code that other developers can easily understand and scale the app faster when required.

Once the project gets completed, QA engineers run a range of tests to spot any malfunctions or bugs. When a QA detects a bug, then it comes to developers to fix it as soon as possible.

The software industry is continually evolving, and new technologies, tools, and trends keep coming. So, developers are obliged to learn constantly. Besides, Flutter developers need to be aware of any minor to major updates related to Framework and other tools.

Types of developers; Where to hire Flutter Developers?

Now that you are already convinced to hire Flutter developers, the cut-throat IT market offers you three options to identify and hire the best talent. With exclusive platforms available for each type of developer, you got the chance to employ skilled Freelance developers, an in-house developers’ team, or a reliable Flutter app development company.

Nevertheless, each option has positive and negative consequences that have discussed below;

How Much Does it cost to hire Flutter App Developers in 2020?

Concerning the question, let us clarify that typically developers from all around the world calculate the cost hourly. On top of that, the rate varies due to three factors: type of developer, level of experience, and regions.

Note: Above shown rates are average rates charged by developers and subject to change with time.

Now, the ball is in your court. We have curated as much information as possible about how you can hire capable Flutter developers to serve any of your purposes. However, we would suggest that if you plan to start a software development venture, then there is no best option than hiring an in-house Flutter developer team.

On the contrary, while hiring mobile developers for a startup or enterprise, outsourcing a Flutter app development company is beyond comparison. All you require is to make sure the company is from a reasonable country and have some experience in the same industry.

If you need any further guidance or want to consult with an emerging outsourcing company, get in touch with us.