Dark Side of Entrepreneurship - the MYSTERY behind CCD Owner's Suicide Note 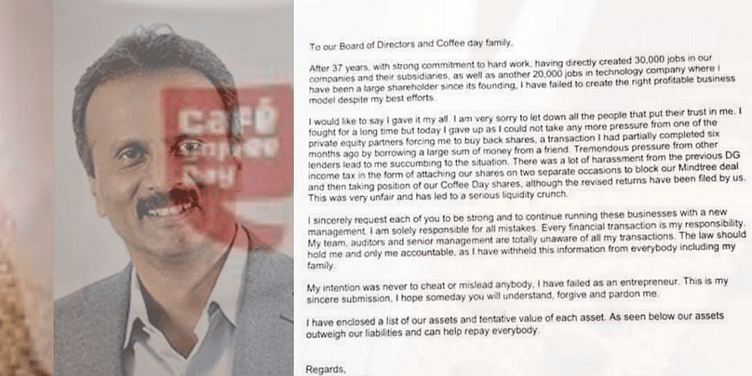 So I left my office in Gurugram and found myself comfortable sipping a filter coffee at the nearest CCD (Café Coffee Day, for those living under a rock). It was just then my I checked my Google news feed and saw the news about the missing of VG Siddhartha, the CCD's owner , of Coffee day enterprises, and a man holding Asia’s largest Coffee estate of over 12,000 acres.

I also read the copy of the letter apparently written by VG Siddhartha(ccd owner) himself that is circulating on social media. The whole thing made me stop sipping the coffee and just leave the store right there, which is exactly what I did.

The incident (I won’t highlight the events as you could find more relevant info on the same from any news sites) reminded me of myself, of how I’ve always wanted to be an entrepreneur at heart. It reminded me of how easy it was to settle for a 9-5 job. It reminded me how I made up excuses for not pursuing entrepreneurship, for not risking my career and taking a step towards my dream.

Mind you, entrepreneurship certainly isn’t everyone’s cup of coffee. But certainly, that wasn’t the case with VG Siddharta. After all, it is his business which puts food on the table for over 50,000 people across India and abroad.

Isn’t that one of the things entrepreneurs are supposed to do? That’s what VGS did, and he certainly deserves credit for the same. At a time when there are barely any Indian companies gaining a stellar reputation among the foreign competition, Café Coffee Daystands out.

I have lots of memories here. The first time I went at a CCD with my mom was at one of its outlets inside the Rajiv Chowk Metro station in New Delhi. I remember how she screamed at me for getting a coffee for ₹160, something she said she could have bought me for ₹5.

i have got to know this from this article here, The MYSTERY behind CCD Founder’s SUICIDE NOTE – Dark Side of Entrepreneurship

CCD was India’s Starbucks. It is responsible for a major portion of coffee exports in India. Despite such achievements, its a pain to see a person so demoralized so as to call himself a failure like VG Siddharta did.

Perhaps we misunderstand the concept of entrepreneurship as a whole. Perhaps those who invest in startups misunderstand the concept more than anyone else. No entrepreneur makes a decision to leave their stable, 9-5 jobs and start working on a business of their own so easily. Sure, some of them are tempted into it, and some of them find themselves with abundant monetary resources which could be applied for the same.

But at its core, the reason why governments encourage entrepreneurship is to create more jobs within the economy. Yes, profitability is certainly important in the long run. But you can’t make it out of thin air!

The case of VG Siddhartha highlights a dark side of entrepreneurship we are not used to seeing. It’s quite an irony that a billionaire was struggling to handle his empire, while another simple man, (Byju Raveendran) a teacher became a billionaire on the same day.

There’s a stark contrast between the two. Raveendran is a new-age entrepreneur who founded Byju’s online education platform. His business is completely online, modern, and thus has more than enough support of the investors.

VG Siddhartha, on the other hand, is a first-generation business born in a family which had a 130-year coffee business. Of course, he had a great initial launchpad to get to where he is today. But at the same time, he could have chosen to make himself comfortable with the wealth of his family. He didn’t choose to do so.

VGS setup the Coffee Day empire at times (since 1993) when it was the toughest to do businesses in India. As I said before, one main reason why the government encourages entrepreneurship is to create more jobs in the economy. Then why are entrepreneurs treated as if they’re a liability rather than leaders stepping out of the norm?

Damn the startup initiatives, ask any startup owner about the problems they’ve faced while garnering funds for their ambition, and they’ll let you know how hard it is to do. The case of VG Siddhartha has only put more fear into the minds of potential entrepreneurs of the future.

I’ve had close friends in my circles with whom I’ve discussed being an entrepreneur. I also know of some people who’ve done the same and failed. Among those that failed, their major gripe was that it soon became a burden to them.

Their complaint with entrepreneurship was that its hard to please your investors while making sure you’re covering all expenses, fulfilling your customers’ needs, paying off your employees’ salaries, all while being profitable.

It’s hard to bear all that pressure on one’s head. Of course, working a 9-5 job is more, much more comfortable than this! Even so, people tell me that half the people looking to build businesses and become entrepreneurs are those looking for easy money.

The reality is far from it. Making money in a world of neck-to-neck competition isn’t easy. It’s even tougher to build a business such as CCD, where you’re continuously attacked by competitors coming out of nowhere.

You have to think all day about making yourself different from others, you have to keep innovating, keep growing. Initially, it’s a passion. But as a business grows, the passion is shared among those who’re merely in it for the returns.

That’s what begins to make entrepreneurship a burden. You start the business dreaming that you’ll become a hero and solve a huge problem that was affecting people. Eventually, you end up building an empire that has little to do with solving peoples’ problems, and everything it does becomes oriented towards solving the woes of investors that helped you bring up the empire.

While CEO’s such as Jeff Bezos may talk of grand concepts of customer obsession, the reality is far from it. Even Mr. Bezos himself knows that a customer doesn’t even know what he/she wants. At one stage, businesses simply begin to solve problems that never existed in the first place!

At one point, a business has to make its customers think that they need something, fool them to think they’re missing out on something. Convince them that a particular brand can get them what they’ve been looking for so long.

At one point, an entrepreneur’s passion, an entrepreneur’s dream simply becomes meaningless. A point comes when most of them realize that the problem they were solving never had to be solved in the first place. Or perhaps even if it had to be done, it created a new set of problems they weren’t prepared for.

It’s hard to believe you’re doing the right thing when facing pressure from all sides telling you that you’re running a sinking ship. Yet exhibit the courage to drag this ship towards where its’ meant to be. All while bearing the burdens of all those aboard this ship for their own reasons.