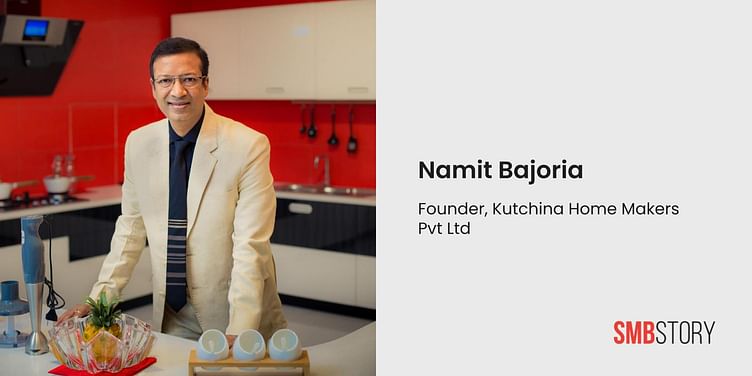 In 2003, Namit Bajoria established Kutchina Hom Makers to become a one-stop shop for kitchen solutions. At present, it is focusing on 'make in India' and has generated Rs 300 crore in revenue.

Hailing from a typical Marwari family, Namit Bajoria (49) was encouraged to start his venture. During his third year of graduation, he started taking small steps towards his entrepreneurial journey.

At the age of 23, in 1994, Namit borrowed Rs 1.30 lakh from his father to start a fax machine agency. But, over the years, Namit took bold steps, pivoted according to changing trends, and followed consumer demand to create a one-stop shop for all kitchen needs.

In 2003, Namit started Kutchina Home Makers Pvt Ltd — now a Rs 300 crore company — without any external funding. And to strengthen the ‘Made in India’ move, Namit is shifting the business from the import model to local manufacturing.

In an interaction with SMBStory, Namit talks about how he built the company and how he is contributing to the Aatmanirbhar Bharat initiative.

Since childhood, Namit was sure that he would run a business. While he was in college, he borrowed money from his father to start a photocopying agency. However, he didn’t continue with the business for long as the commission margin was less.

At the same time, in the late 90s, he saw an opportunity in the vacuum cleaning market, which was opening up in India. However, this, too, didn’t turn out well as demand didn’t pick up.

“I was always keen on studying the market, and this habit helped me survive the hardest of times. I took risks and experimented with different product categories to keep the business afloat,” Namit, Founder of Kutchina Home Maker Pvt Ltd, tells SMBStory.

In the early 2000s, he saw the demand for modular kitchens rising in India. He began researching and found kitchen chimneys were the trending item in the market.

"The demand for kitchen chimneys blew the market as chimneys are necessary for Indian-style cooking, especially frying. However, mostly chimneys back then were imported from Europe, designed for European-style cooking. And, this wasn’t solving the problem of Indian kitchens that emit greasy smoke,” he says.

Namit contacted European manufacturers to make chimneys suitable for Indian kitchens. He realised Indians need auto clean chimneys to avoid the hassle of washing filters, which many other big brands, like Fabre, had introduced in the market.

He plunged into the category and offered customers a 15-day buyback option, which "did wonders for the brand". The policy asked customers to pay for the product in 15 days only if they liked it; majority of the customers liked the product.

Namit says starting from an agency to launching an in-house brand came with its own pros and cons, given he wasn’t an expert in the industry. However, he never lost hope.

Today, Kutchina Homes is one of the few brands in India offering complete kitchen solutions. From small home gadgets to large appliances, RO, and modular kitchens, it has everything under one roof.

Namit believes the demand for modular kitchens in India is still in its nascent stage, and there is "good scope in the years to come".

According to the Registrar of Companies (RoC), ﻿Kutchina﻿ Home clocked over Rs 237 crore revenue in FY20, and Namit claims the company now generates Rs 300 crore.

Since inception, Namit was importing products from Germany, Vietnam, Japan, China, and other countries, for Kutchina Homes. However, things changed after the COVID-19 pandemic hit the world in 2020.

Namit says, “Amidst the pandemic, the India-China border dispute and the anti-China sentiments to boycott Chinese products hindered the supply chain in the country. China also increased container freight, and there were delays in shipments, which caused problems."

Around the same time, with the Indian government calling for a self-reliant India, Namit decided to take Kutchina Homes’ manufacturing ownership into his own hands. He gradually changed tack - importing raw materials from abroad and making products locally in India.

At present, about 70 percent of Kutchina Homes’ smaller appliances are made in India through outsourced manufacturers, while the RO and complete modular kitchen setup are made at the brand’s Kolkata facility.

Namit says the brand is now importing larger appliances, but will manufacture these products in India oon after it sets up another facility in Kolkata. It competes with the likes of Bajaj in the small appliances category, and Kent and Eureka Forbes in RO.

According to Namit, the brand faces two major challenges — getting brand recognition and hiring the right talent.

He explains, “Based out of Kolkata, we face a struggle of being recognised as a national brand. People often mistake us as a region-focused brand. Secondly, we face challenges in finding the right talent as we are not in Delhi, Mumbai, or Bengaluru- preferred locations of an ideal candidate."

Namit has now opened up remote working options to ensure the company does not miss out on good talent. He is optimistic about spreading his wings to reach the nooks and corners of the country, which would give Kutchina Homes national recognition.

He has plans to open up retail stores across India, and is aiming for an initial public offering (IPO) for Kutchina Homes "in the next three-four years".