Pulwama terror attack: Here’s how you can help the families of the CRPF martyrs 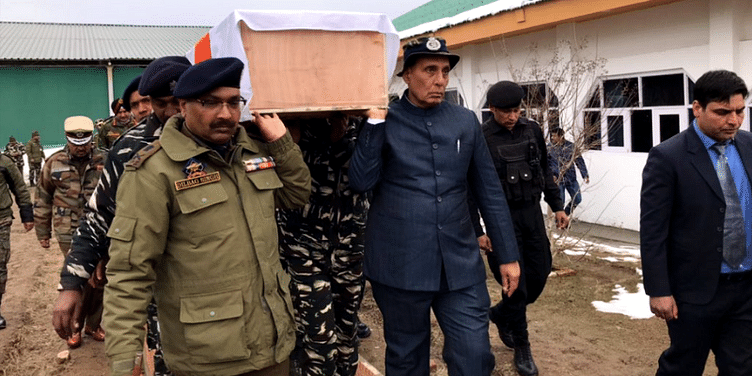 Several government websites as well as digital and crowdfunding platforms are now working towards collecting funds for the families of the victims of Pulwama terror attack on February 14.

As India reels in the aftermath of the February 14 Pulwama attack, which claimed the lives of 44 Central Reserve Police Force (CRPF) personnel, citizens have come forward to help the grieving families through financial support, and assistance for the education of the martyrs’ children.

We salute you, brave sons of Mother India.

You lived for the nation and served the country with unparalleled valour.

We stand in solidarity with the bereaved families. pic.twitter.com/tav2J3hSMI

Organisations such a Life Insurance Corporation have processed the insurance money to the families without putting them through the hassles of paperwork, while Vistara airline has reached out to the Indian Air Force and offered travel assistance for all the family members of the martyrs.

At a time when India stands united in the face of terror, we highlight the organisations that are collecting donations and doing crowdfunding drives to assist the grieving families and help them in this tough time.

The Ministry of Home Affairs fundraising initiative allows donations of up to Rs 15 lakh to an individual's account and donations to the Bharat Ke Veer corpus.

To help citizens donate generously, the government has enabled payments via internet banking or UPI through the web platform. All contributions to the fund are 100-percent tax exempted. The amount so donated will be credited to the account of ‘Next of Kin’ of the of CRPF jawaans.

To contribute to the corpus, you need to visit bharatkeveer.gov.in and select Bharat Ke Veer Corpus Fund by clicking on the tab options. A new window appears where you need to fill in your personal details. Also add the OTP sent to your mobile number. Then you will get the option to enter the amount you want to donate and through a payment gateway you can add your account details and donate the desired amount.

One can also make a donation to kin of individual soldiers who have laid their life in the service of the nation.

Bravehearts of CRPF who made the supreme sacrifice and attained martyrdom in the Pulwama attack on 14/02/2019. pic.twitter.com/eHrPnYaSGV

Paid tributes to the martyrs of India’s freedom struggle at Eram in Bhadrak(Odisha). The nation will never forget the sacrifice of these martyrs. pic.twitter.com/uqkovB1kf7

The National Defence Fund was set up to take charge of voluntary donations in cash and kind received for the promotion of the national defence effort, and to decide on their utilisation. The Fund is used for the welfare of the members of the Armed Forces (including paramilitary forces) and their dependents.

The Fund is administered by an executive committee, with the Prime Minister as Chairperson, and Defence, Finance and Home Ministers as Members. The fund accepts online contributions on pmindia.nic.in, pmindia.gov.in and www.onlinesbi.com website of State Bank of India. Collection account number is 11084239799 with State Bank of India, Institutional Division, 4th Floor, Parliament Street, New Delhi.

Lets come together and unite against the Pulwama terror attack. Let's show the families that we care and we are here for them. #PulwamaAttack #KashmirTerrorAttack #Pulwamahttps://t.co/hIvdXRf2SQ

Ketto and the Rotary Club of Bombay Bay View have come together to raise funds for families of Central Reserve Police Force (CRPF) personnel with a campaign titled, 'Lets Salute and Support 40 CRPF Brave heart’s Families of Pulwama Terror Attack'. All funds raised from this campaign will be donated to the families of the CRPF personnel martyred in the terror attack in Pulwama, Kashmir. The raised funds will go to the CRPF via BharatkeVeer Corpus Fund and Ketto has waived off its fee for this campaign.

Milaap has initiated a donation drive on its crowdfunding platform for the families of the CRPF personnel. The crowdfunding is spearheaded by ‘Hong Kong Desi,’ an organisation raising funds among NRIs and Indians alike.

ImpactGuru Foundation has also started a fundraising initiative and they have also waived off the platform fee for this campaign. The funds gathered will be sent to the families of the CRPF personnel.

We have opened contributions for the families of @crpfindia Jawans martyred in #Pulwama — We stand in complete solidarity with our forces in this time of grief. 🇮🇳

Google Pay has also collaborated with CRPF Wives Association to set up an option to donate for the grieving families. The icon for CRPF Bravehearts is seen on the first row of the Google Pay homepage, with the logo of a soldier standing in front of the tricolour.