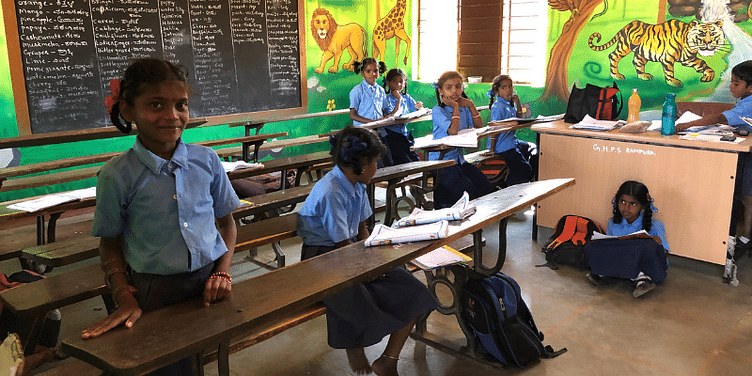 One School At A Time (OSAAT), a registered non-profit organisation, has revamped 24 government schools in rural Karnataka, Tamil Nadu, and Uttar Pradesh by building classrooms, playgrounds, toilets, and other facilities.

A school is said to be a home away from home for children. However, government schools in India are found wanting on many fronts. Several state-run schools are characterised by crumbling infrastructure, dilapidated buildings, and lack of electricity, water, and sanitation facilities.

The Annual Status of Education Report (ASER) 2018 shows that around 25 percent of government schools across the rural areas of the country do not have access to drinking water. Nearly 26 percent do not have basic facilities like toilets and libraries, while a whopping 78.7 percent are devoid of computer labs.

It was to resolve these problems that a group of techies from India based in the San Francisco Bay area, US, joined hands to form One School At A Time (OSAAT) in 2003.

OSAAT, a registered non-profit organisation, is presently helping schools rebuild their infrastructure, and providing key facilities like smart classrooms, spacious playgrounds, and fully functional toilets. It has already revamped 24 government schools in rural Karnataka, Tamil Nadu, and Uttar Pradesh, and is presently working with three other schools in Mysore and Raichur districts of Karnataka.

Besides the IT professionals, presently, the organisation is ably supported by many architects, civil engineers and retired professionals based out of India to ensure the smooth execution of its initiatives.

Reviving One School At A Time

Gayatri Devi Junior High School is located near Bareilly district of Uttar Pradesh. All 500 students in the school had to study under a tree and put up with harsh weather conditions on a daily basis. They had no desks, chairs, or blackboards. Open defecation was a common sight.

In 2017, OSAAT stepped in, and built six classrooms and a toilet block for the school.

“I am happy that the children have a comfortable environment to pursue their learning. I was very concerned about their safety all these days since dacoity, robbery, and murder are frequent activities in the neighbourhood of our school. But, now, with OSAAT’s help, student enrolment has also gone up by 44 percent in the last two years,” Tara Rawat, Principal, Gayatri Devi Junior High School, told YourStory.

All of OSAAT’s initiatives have been focused on ensuring students have a healthy and enjoyable life at school instead of languishing without basic amenities or dealing with poor structures.

Mahesh Shankarappa has been teaching at Basavarudh Primary and Secondary School, situated in Kottalagi, close to the Athani taluk of Belgaum district in Karnataka since 2001. However, he began finding it difficult to hold classes due to the deteriorating infrastructure.

“It was tricky to teach children without distractions because we had a leaky roof. Water used to seep in whenever it rained. We tried quite a few quick fixes, but none of them worked,” he says.

OSAAT transformed the school into an aesthetic and functional place by demolishing the structure and constructing a new one with seven classrooms and a toilet block.

According to a report published in the International Journal of Sociology and Social Policy, poor physical infrastructure is found to have an adverse effect on children’s academic performance at school. That’s not all. It also reflects on their attendance, academic cycles, and motivation levels.

“A good and healthy surrounding not also assures learning but also improves the mental and physical well being of students. Our team strongly feels that every student deserves a safe and favourable atmosphere, and has been working towards creating it in the last 15 years,” says Ravishankar Byrappagowda, President, One School At A Time.

Also read: How to bring about long-lasting community transportation in rural India

One School At A Time was founded by a bunch of techies led by Vadhiraja Bhatt and BV Jagadeesh. Vadhiraja, who was a mridangam player, orchestrated two house-full shows back in the early 2000s. He pooled all the money he received from the performance to revamp a government school at Bajagoli in Udupi district of Karnataka. Vadhiraja was keen on giving back to the school he had studied in when he was young.

BV Jagadheesh too followed in Vadhiraja’s footsteps. In 2003, a few more members of the band joined the initiative of rebuilding government schools in rural areas. Very soon, OSAAT was registered as a non-profit organisation in India.

Since then, the organisation has restored 24 schools across rural India, one at a time, with the help of its volunteer base in India, which has grown from 12 to 100.

How does the organisation function?

One School At A Time focuses mainly on repairing schools situated in rural areas since they are more likely to have dilapidated buildings and suffer from lack of funds. The schools are identified by the OSAAT team via research, or from external nominations filed by the general public on their website.

Once the nomination is reviewed, a few volunteers visit the school and inspect the campus. As the next step, they also conduct a due diligence where the volunteers gather details about the student count, faculty, financials, and the property deed of the school. After all the facts are verified, the organisation enters into an agreement with a contractor and the school to rebuild its entire campus, or parts of it.

After the completion of the project, the volunteers visit the school every year to keep an eye on the maintenance of the campus.

“We follow a stringent procedure when it comes to identifying and rebuilding schools. We spend about Rs 15 lakh to Rs 50 lakh on restoring each school ,depending on the amount of work that needs to be done. We also ensure that we utilise 100 percent of all the funds we receive without bowing to administrative costs,” Satheesh Heddese, Trustee, One School At A Time explains.

Presently, OSAAT has raised Rs 3.3 crore for three of its ongoing projects, and still expecting a lot more. The organisation is looking forward to meeting its target of giving a facelift to over 100 schools by the end of 2019.