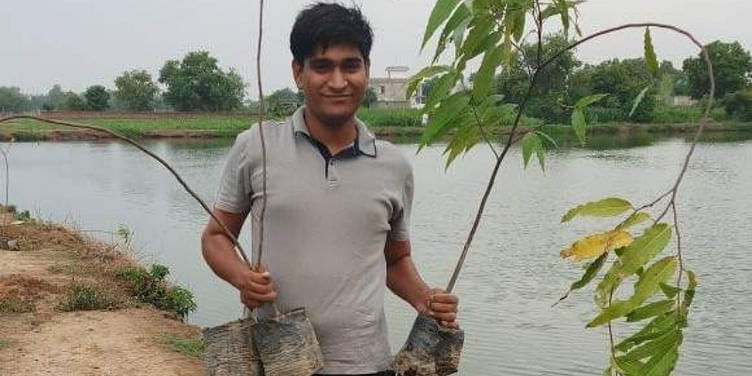 Ramveer Tanwar has brought together villagers and revived 10 lakes in Gautam Buddha Nagar, Uttar Pradesh. His awareness programme on conservation to avert the water crisis has now spread across more than 50 villages.

In 2018, a report by NITI Aayog stated that India was facing the worst water crisis in its history. About 600 million Indians don’t have access to safe drinking water, and two lakh people die every year for the same reason. The worse is yet to come. By 2030, India’s water demand will be double of its available supply.

Clearly, we need to save our existing water sources from dying.  Several NGOs and individuals have come forward to save water bodies, including 26-year-old Ramveer Tanwar. The engineer and social activist has revived around 10 lakes in Gautam Buddha Nagar, Uttar Pradesh, under his water conservation project, reports The Epoch Times.

Now, his initiative has spread across 50 nearby villages.

Hailing from Dadha village in Greater Noida, Ramveer grew up playing near lakes, which were an integral part of his life. Unfortunately, as the years went by, nearby lakes began dying due to garbage dumping and encroachments.

In his final year of engineering at UP Technical University, Ramveer took matters into his own hands. In an interview with The Logical Indian, he said,

There were more than 200 lakes in Noida and right now there are officially no lakes in the city.

In 2013, Ramveer organised a small gathering called ‘Jal Choupal’ to discuss water conservation in nearby villages. Issues such as garbage disposal and lake encroachments were discussed in these gatherings.

He later said to The Logical Indian,

Due to lack of awareness, people in the village would waste water incessantly. They were doing this out of ignorance. Fining them is not a solution.

ALSO READ: This 23-year-old girl from Kerala is converting trash to art, beautifying a lake in her city

In 2014, Ramveer started reviving lakes by cleaning them with the help of villagers; they did this by setting up a double filtration system. All water entering the lakes would have to pass through a mesh of wooden planks and then a mesh of grass.

To clean the lakes of slush made up of small finer particles, Ramveer, along with volunteers, encouraged farmers to raise 10,000 slush-eating fish.

The efforts of Ramveer and his Jal Chaupal initiative attracted the State government’s attention, which later set up a ‘Bhujal Sena’ (groundwater army) in every district of UP. The government made Ramveer the Bhujal Sena coordinator for his district.

To take his fight forward, Ramveer has started an online campaign to urge youth to clean up polluted water bodies in their locality. An individual can be a part of this campaign by clicking a selfie near a polluted water body and uploading it on Facebook with the hashtag #Selfie_With_Pond.

In his conversation with The Epoch Times, Ramveer said,

It will help others understand the importance of lakes and ponds, and take initiative to save them. After saving the lake, we are trying to convert it into a tourism spot, so tourists from different countries can come to see the lake, and stay in a rural area. If they like it, they can donate to save more lakes.

Also read: At this Goa’s all-purpose zero-waste store, one can buy anything but plastic and non-organic products