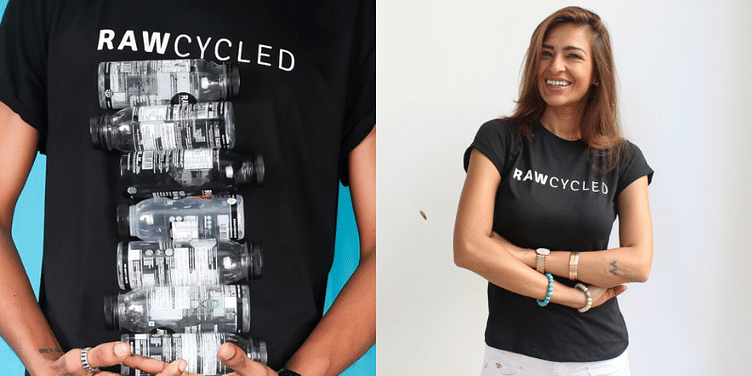 In a bid to create environmental consciousness, Raw Pressery, a health food and beverage startup, is transforming plastic waste into fashionable clothing.

It is estimated that a massive 25,940 tonnes of plastic waste is generated in India every day, according to a report published by the Central Pollution Control Board (CPCB) in 2017. This translates to a per capita consumption of 11 kilograms of plastic on an average.

A large part of this waste can be attributed to single-use or disposable applications in the form of bottles, bags, wrappers, and sachets - the most fatal of them all being the plastic bottles. However, the good news is that plastic bottles made of polyethylene terephthalate (PET), though not biodegradable, are completely recyclable.

For this, the startup collected 1.2 million bottles from customers and recycled it into clothing, and has launched a collection of 1,500 t-shirts in the market this year.

The innovative solution of processing plastic to make textiles was conceptualised by Atiya Rakyan, who calls herself the Chief Recycling Officer (CRO) of Raw Pressery.

“The after-effects of poor disposal of plastic waste has proved to be dangerous for the whole ecosystem. So, we as a startup wanted to be environmentally responsible for the plastic we use in our packaging, and recycling was probably the best way to do that."

In 2017, Raw Pressery sponsored an annual food and shopping mela called Sula Festival in Nashik. During the course of the event, Atiya observed tonnes of plastic bottles being thrown in and around the venue. Even the dustbins they set up started overflowing with plastic bottles, she says.

“At that very moment, I began thinking about alternative solutions to manage plastic waste. Initially, I considered replacing plastic with glass bottles. But, after conducting some research, I figured that the carbon footprint in manufacturing glass was a lot more. Hence, recycling plastic was the best available option. When I delved deep into the subject matter, I realised that the possibilities were infinite. Since fashion is something that has always been close to my heart, I decided to go with it,” Atiya tells YourStory.

To start with, Atiya conceptualised a “You Return, We Recycle” policy for Raw Pressery, after which the startup partnered with a logistics firm to collect empty bottles from corporate clients.

Several companies like Google, Larsen and Toubro, and Facebook ordered Raw Pressery’s bottled juices on a regular basis. Hence, every time a delivery was executed, used bottles were heaped up.

In addition to this, the startup also started offering a pick-up service for any individual customer who had amassed 20 or more empty bottles.

“We partnered with a manufacturing facility in Mumbai to recycle seven empty plastic bottles into one piece of everyday wear. The process was very simple. The used bottles were first washed and chopped into flakes. These were later melted and converted to chips before extruding the same into yarn. The yarn was then woven into fabric, stitched and dyed to make t-shirts,” Atiya explains.

The t-shirts, which are wrinkle-free, comfortable, edgy, and reversible, are printed with text aimed at highlighting the importance of recycling plastic. Priced at Rs 1,000 per t-shirt, the clothing range is available online, along with a global delivery option.

Contributing to a plastic-free environment

By attempting to recycle all the plastic produced, Raw Pressery is showing the way forward for other firms to adopt plastic neutrality.

“The usage of plastic cannot be stopped by companies and industries entirely since it is reasonable, flexible, and sturdy. However, they can be recycled into many products like kitchenware, clothing, and carpets, and in turn, be sold in the market. Not only does this lead to environmental conservation, but also a circular economy,” says Atiya.

Only 60 percent of plastic waste is recycled in India at present. However, if more individuals and organisations join hands to treat waste as a treasure trove, the country might soon be able to see a 100 percent success.

Anuj has been a health connoisseur for a long time. His brief stint in the US introduced him to the concept of cold-pressed fresh juices. Though initially bootstrapped, Raw Pressery received a small round of angel funding later.

On his foray into this space, he says,

“When I was in college and working outside India, I clearly noticed the lack of fitness-related products in India. Only things made at home was considered to be healthy. Besides, many products that made claims of low fat, no preservative and no sugar were not really telling the truth.”

From being teased for being a transgender to opening her own beauty salon: Deepa’s inspiring story