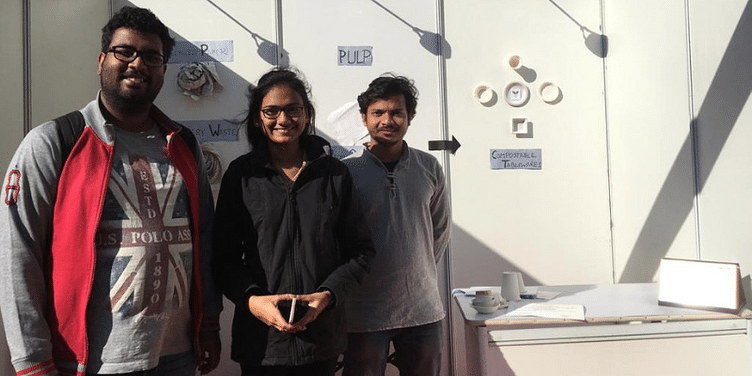 Kriya Labs, a startup incubated at the Indian Institute of Technology-Delhi (IIT-D), has developed a technology that can convert agro-waste like rice straw into pulp, and further process it to make biodegradable cutlery.

It is common to spot plumes of smoke rising from agricultural fields across India, especially Punjab and Haryana in October every year.

The NASA Earth Observatory has estimated that farmers burn seven to eight million metric tonnes of rice straw every year immediately after the harvest season.

Rice straw is a vegetative component of the rice crop which is left over to burn or used as fodder after the produce is harvested. Setting fire to agricultural residue is known to emit harmful gases such as nitrogen oxide, methane, carbon dioxide, and a huge amount of particulate matter, which in turn directly affects public health as well as the environment.

People staying in various parts of Punjab and Haryana including the National Capital Region (NCR) are affected the most, since these gases can cause ailments like asthma, bronchitis, retarded nervous system, and cognitive impairment.

Kriya Labs, a startup incubated at the Indian Institute of Technology-Delhi (IIT-D) has come up with a solution to this alarming problem. It has developed a technology that can convert agro-waste like rice straw into pulp, and further process it to make biodegradable cutlery.

Founded by three students - Ankur Kumar, Kanika Prajapat and Pracheer Dutta, Kriya Labs aims to create a market for rice straw by assigning a commercial value to it.

This in turn, is expected to reduce the instances of burning rice straw, thereby contributing to a decline in pollution levels in the region. Besides, the process of converting rice straw into tableware gives a leeway for empowering rural folk by generating employment opportunities. Farmers too can earn an additional source of income through the sale and disposal of agro-waste.

Ankur, Kanika, and Pracheer were batchmates while pursuing engineering at IIT Delhi. Initially, they worked together as part of a final-year project, which then turned into a proposition for a startup.

“The three of us were working on a project focused on turning bagasse, a fibrous residue derived while producing sugar, into useful items like cardboard and paper. Later, when we got to know that rice straw was being burned across the country adding to the pollution levels, we came up with the idea of working on a viable technology that can help convert it into a productive resource. That is how Kriya Labs was formed,” Kanika Prajapat, Chief Technology Officer, told YourStory.

Foundation for Innovation and Technology Transfer (FITT) is a registered society with IIT Delhi that helps startups to establish and grow by offering a host of services like access to seed funding, operational guidance, and provision of marketing aids. The foundation decided to incubate Kriya Labs after conducting the requisite due diligence.

Also read: Meet the 15-year-old water conservationists who want to save Bengaluru from becoming the next Cape Town

Kriya Labs has designed an apparatus that can perform a series of processes to turn rice straw into pulp.

“The straw is treated with a natural solvent to separate the organic polymer from cellulose leading to the formation of pulp. The semi-solid substance is then dried and moulded into biodegradable cups, plates and jars. This entire operation is eco-friendly and sustainable,” Kanika explains.

Kriya Labs has patented this technology and set up a functional prototype of the machinery at the IIT-Delhi campus.

The startup claims that four to five tonnes of rice pulp can be generated in a day using this process, which is sufficient to tackle the residue generated by 800 acres of cultivated land every harvest season. The yield of the machinery is 70 percent which translates into 0.7 tonnes of pulp from one tonne of rice straw. This pulp is in turn capable of producing 70 pieces of tableware.

“The traditional method of producing pulp is known to require heavy machinery and is not viable for small-scale operations. Also, the pulp tends to be bulky in nature and hence, transporting it for further processing is both tedious and expensive,” notes Kanika.

Kriya Labs is planning to set up its first processing unit by the end of this year to convert rice straw into pulp in Ludhiana by partnering with local entrepreneurs and farmers.

“We will be installing machinery at the unit and sprucing up the place. While the ownership will lie with us, both operations and maintenance will be taken care of by the local community and rural folk,” says Pracheer Dutta, Chief Operating Officer, Kriya Labs.

One unit of the machinery has a capacity to generate five to ten tonnes of rice pulp in a day and costs Rs 1.5 crore.

Kriya Labs is also in talks with a logistics company to periodically move the pulp from Ludhiana to Delhi for further processing. “We have tied up with a tableware manufacturing unit called Ecoware in Delhi to process the pulp and make plastic-free cutlery like plates, cups, bowls, trays and boxes,” Pracheer explains.

The startup also aims to empower rural youth by establishing a connect between agriculture and manufacturing sectors. Employment opportunities are expected to be thrown open for several people from the local communities to handle the processing unit. Besides, farmers can get an additional source of income by selling one kilogram of rice straw at Rs 3 instead of burning it.

“Our goal is to set up these processing units across multiple locations in the country so that we can establish agricultural waste as an asset and contribute to a pollution-free and sustainable economy,” says Kanika.

Also read: At this Goa's all-purpose zero-waste store, one can buy anything but plastic and non-organic products