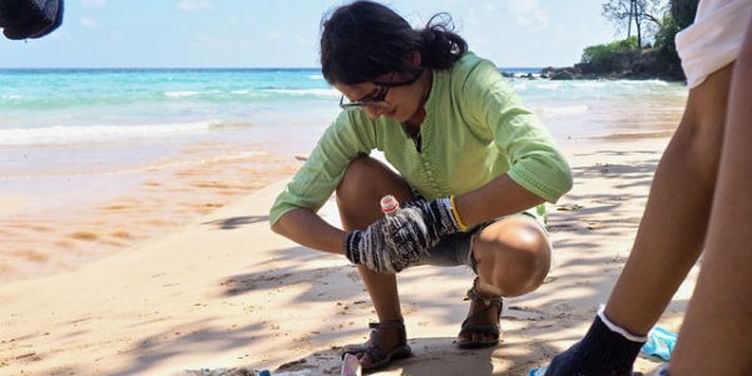 Since November 2018, Garima Poonia, through her Kachrewala initiative, has managed to collect and segregate over 250 kg of waste from the beaches of Neil Island in the Andamans.

The concern about water pollution in seas and oceans across the world is growing. Due to poor waste management, plastic and other waste items are making their way into the oceans.

Tourists are also adding to the woes by disposing of plastic bottles and bags in water bodies while travelling, thus polluting it and causing harm to the marine life.

After witnessing the lack of waste management on beaches, resorts, and roads, 26-year-old Garima Poonia decided to devote her time and efforts to clean up the beaches in the Andamans’ Neil islands.

A college dropout, Garima started the Kachrewala Project in 2017 to tackle the menace.

Till now, she has managed to collect and segregate a total of over 250 kg of trash from the five beaches in Neil Islands. The waste was collected not only from the beaches but also from the resorts and restaurants as well.

Moreover, she is also conducting workshops on waste segregation to raise awareness among children. The workshop also aims to educate children on the dire consequences of plastic pollution.

“I didn’t think it would be a long-term project, because I was supposed to go for a degree in development studies to the University of Sussex last year. But, I realised that the call for the Andamans was a lot stronger. Preserving the islands is important because they are so unique in terms of their ecology. They house about 1,000 endemic species.”

Garima decided to dedicate her time for the cause when she came to the Andamans with her family for a vacation. She was looking to get a scuba diving licence, and it was then that she witnessed the dismal waste management measures in the island.

This led to her decision of joining ReefWatch, an NGO working towards the marine conservation in the islands. Here, Garima proposed a plan about solid waste management to the team, and on the other hand she was trying to understand informal recycling industry at Port Blair.

Speaking about the same, she told She The People:

“I met a lot of people from the private industry to see if anyone would be interested in funding the project. No one wanted to, but in the end, I met someone who helped me get two jobs through which I could sustain myself and work on my project. I met the administration to see if they would be willing to help, since their support/collaboration would be important. The project formally began in Neil in November last year.”

Last year, Garima also organised a waste management and conservation workshop for children in the Navy Children School in Port Blair. During this exercise, 33 kids collected 100 kg of waste.

Now, the commuters and tourists at the island city can see various posters about waste segregation. Further, Garima plans to put it up on every auto-rickshaw to sensitise the tourists coming to the island.

As far as the waste collection is considered, Garima is now working with the local authorities to phase out plastic straws from the island.

Do you have an interesting story to share? Please write to us at [email protected].To stay updated with more positive news, please connect with us on Facebook and Twitter.

While India fights triple talaq, these 19 countries have already abolished it