From Delhi to Pune, how Indian cities are going green by adopting electric buses 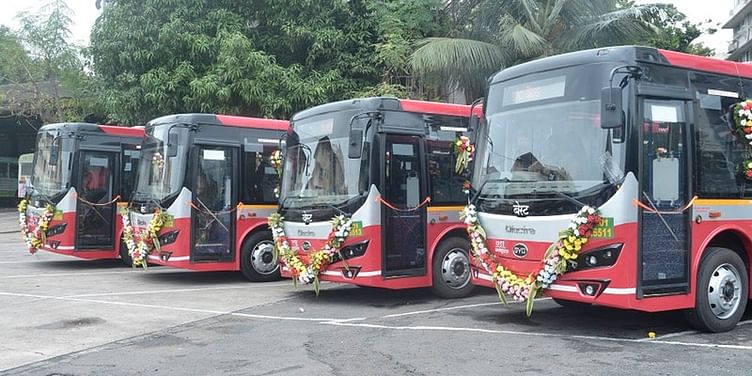 Electric vehicles are the future with the government, corporates, and startups pushing for its adoption. So, why should public transport be left behind? Cities including Delhi, Mumbai, and Pune are increasingly adopting electric buses.

Climate change, sustainability, and pollution are some of the key buzzwords of today.

A 2018 WHO report concludes that 93 percent of all children in the world breathe air with pollution levels that exceed their guidelines. These pollutants majorly originate from heavy-duty vehicles, like bulldozers, buses, and trucks.

According to an Indian study by the Health Effects Institute in 2015, “air pollution contributed to nearly 1.1 million deaths in 2015, with the burden falling disproportionately (75 percent) on rural areas”.

The future of vehicles is surely electric. Personal electric vehicles are already quite popular in the market. So, the next logical question would be – why not electric public transport?

Electric buses would be the lowest-carbon option available for heavy-duty transport today, and it looks like Indian cities are already adopting them.

Here’s how major cities across the country are going green – electrically.

After executing a trial run to promote emission-free electric buses in November 2018, the Delhi Government committed to understanding and deploying electric buses. These buses were 33-seaters, were air-conditioned, and could run up to 200 kilometres on a full charge within 30 minutes.

The Delhi Integrated Multi-Modal Transit System (DIMTS) was assigned to manage the procurement. By then, the Transport Department confirmed that the construction of 1,000 electric bus depots had begun.

By November 2019, the state government sanctioned the deployment of 5,095 electric buses, operating on 64 intracity routes, under Phase II of the FAME India Scheme meant for faster adoption and manufacturing of electric vehicles. 100 vehicles were allotted for connectivity to Delhi Metro Rail Corporation (DMRC), and another 400 for intercity operation.

The Brihan Electric Supply and Transport Undertaking (BEST) in Mumbai installed 10 electric buses on September 10, 2018, to reduce its carbon footprint. The 31-seater zero-emission electric buses are nine metres long and can travel up to 200 kilometres on a single charge of three hours.

Six are air-conditioned while four are non-AC. The buses are disabled friendly, have electronically controlled air suspension systems, and CCTV cameras.

The tender has been floated under the FAME India Phase-II, where the work is the procurement of buses along with the operation and maintenance of the routes provided by BEST.

Pune City is now home to electric buses that will ply passengers back and forth across seven routes (as of now) twice a day.

This decision was brought about by Pune Mahanagar Parivahan Mahamandal Limited (PMPML) The buses can run efficiently for 225 kilometres on a full charge. They can hold 45 passengers and the fares will reportedly cost the same as regular buses.

The special charging stations and holding points for these buses have been set up in Bhekrai Nagar and Nigdi. As of November 2019, up to 133 electric vehicles run on the city’s streets, as a part of the first phase of Pune’s e-bus programme.

The PMPML has not invested in the purchase of these e-buses, however. All the vehicles are owned, operated, and maintained by their manufacturer Olectra Greentech and its BYD, its Chinese partner.

Olectra is a Secunderabad-based manufacturer. The role of PMPL is to schedule and test the scope of these newly installed electric buses for their range, power consumption, and charging times.

The Telangana State Road Transport Corporation (TSRTC) inaugurated its first fleet of 40 electric buses. The electric buses will operate on six routes within Hyderabad and Secunderabad.

They allow connectivity to and from Rajiv Gandhi International Airport, areas of Shamshabad, and various areas within both Hyderabad and Secunderabad.

For the deployment of electric buses in the city, TSRTC has collaborated with Olectra Greentech Ltd and BYD to rent buses for 12 years.

Under the Smart Cities Mission, another 334 buses are being installed – 309 buses for the Greater Hyderabad Zone, 25 to Warangal. As in the Olectra fleet, this proposal is also for 12-metre low-floor buses. However, these 334 new vehicles will be non-AC.