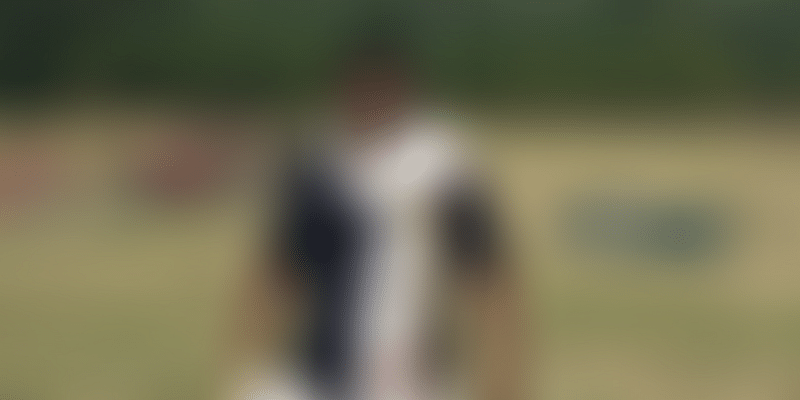 Vamsi Vardhan, 31, has come a long way since he was abducted by Maoists in 2014. He cleared the civil services exam, and launched an NGO focused on educating underprivileged children in his village in Andhra Pradesh.

The forest floor was thick with outgrown roots, dead leaves, and knobby bushes, so much so that the path seemed almost impenetrable. Vamsi Vardhan and three other panchayati workers were made to walk through this maze with their eyes blindfolded. There was an eerie stillness in the air as the Maoists kept a close eye on them.

The Giridih district of Jharkhand is not only known for its plateaus, mines, and dense hilly terrains, but also for its communist activity. And, 31-year-old Vamsi was caught in the crossfire while organising a welfare camp in 2014 as part of the Prime Minister Rural Development Fellowship (PMRDF) in one of the remote areas of the village of Nakania.

“Lying there, listening to the sound of bullets entering rifles made my blood run cold. I was surrounded by at least 12 to 15 Maoists, going by the sound of bullets being loaded. I was held in the middle of a jungle, given plastic sheets to sleep on, and provided with food twice a day. There were several junctures where I thought that my life would end,” Vamsi Vardhan tells SocialStory.

After three days of being held captive in the jungles of Parasnath Hills, the Central Reserve Police Force (CRPF) executed a successful rescue mission.

The encounter with the Maoists left Vamsi flustered, but heightened his resolve to enter public service. So, he continued serving as a PRMD fellow, began preparing for UPSC examinations, and established Akanksha, a non-governmental organisation near his hometown in the Kurnool district of Andhra Pradesh.

Today, Vamsi has completed his Indian Revenue Service (IRS) training and is waiting to be placed. That’s not all; he has been sponsoring the education of over 75 underprivileged students and helping many children in his village by conducting after-school classes under Akanksha.

Towards better education: this crowdfunding initiative is empowering teachers to make a difference

Born in the tranquil village of Thimmanayunipeta in Kurnool, Vamsi initially studied in a private school in the vicinity. After Class 6, he moved to the district of Anantapur to live with his grandparents.

“I had a very tough childhood. My parents could not afford to pay for my education, and I was sent to my grandparents’ house. They paid my school fees for a few years, and some relatives offered financial assistance later. These events had a huge impact on me. They made me understand the value of education and the significance of people in need,” Vamsi says.

In 2006, Vamsi began pursuing a degree in computer engineering from Sree Vidyaniketan Engineering College in Tirupati. During this time, he was involved in several efforts to initiate political and social reform for the betterment of the community.

The Right to Information Act (RTI) had been introduced, and Vamsi started using it to ensure transparency and accountability regarding government developmental schemes. The powerful tool of RTI enabled him to secure electricity, water supply, and road connectivity to Thimmanayunipeta .

After graduation, Vamsi bagged a job at Tata Consultancy Services (TCS) as an Assistant Systems Engineer. However, just when he was about to join, the then 22-year-old was allegedly assaulted by the local MLA.

“In four years, I had initiated 30 to 40 RTI applications. But, things went downhill when I raised an RTI request on the performance of my MLA in the Assembly. His men attacked my house in Thimmanayunipeta, and later beat me up with sticks at the village square,” he says.

He recalls that his relatives and friends turned against him, and that he was on the verge of sinking into depression.

“That was when I took a firm resolve to quit activism and get involved in activities where I could work on ground to make a difference to society,” Vamsi says.

He took up the TCS job after the incident, but kept deliberating on initiatives that could benefit people and society. After over a year, he quit, joined the PMRDF, and later set up Akanksha along with his friend, Rajesh Bathula.

Using arts, sports and education, this organisation is building a better tomorrow for underprivileged kids

Vamsi strongly believed in the potential and power of education. He knew that it could transform people’s lives and that of generations to come.

He pooled in his personal savings to sponsor the education of some economically backward children in his village. In 2015, while preparing for UPSC, he founded Akanksha to expand his efforts and set the ball rolling by establishing a learning centre in Thimmanayunipeta.

The Akanksha team initially worked to identify families struggling to afford quality education for their children. And then, with the help of a few trainers, the organisation began offering free tuition to those children.

“The year 2016 stands out as one of the best in my life. I secured an All India Rank of 220 in civil services, and got a chance to enter IRS. I also managed to secure volunteers and trainers not only for academics, but for extra-curricular sessions such as sports, theatre, art, music, and dance. This was done to enable students to develop their overall personality,” Vamsi says.

Akanksha also implemented an initiative called Digital Aasha, an endeavour to install digital labs in government-run schools in and around the village.

With the aid of donations and crowdsourced funds, the NGO has started three computer labs in and around the village, and sponsored the education of more than 75 children in Andhra Pradesh, Jharkhand, and Telangana.

“Making a difference in the lives of others has always given me a sense of gratification. Hence, I intend to continue my efforts in the direction. In the coming days, I wish to extend the sponsorship to as many as 500 students. I also aim to set up a residential gurukul and a sports academy near my village,” Vamsi says.