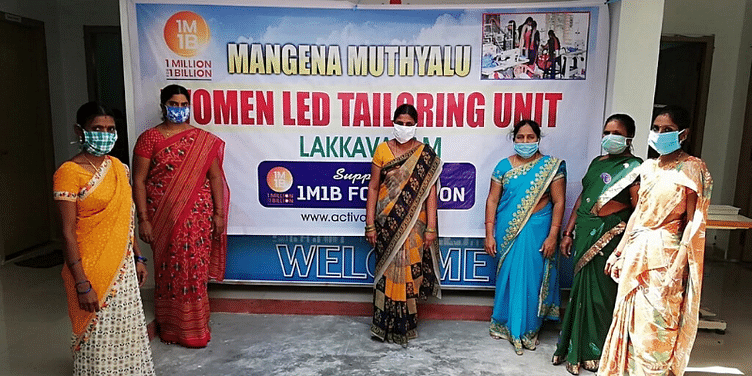 At a time when many healthcare centres are dealing with a deficit of personal protective equipment, a tailoring unit at Lakkavaram in Andhra Pradesh is making and supplying masks, shoe covers, and lab coats to the state government with the help of the 1M1B NGO.

Nagasatyavati and her family of three were left with no income for more than a month, owing to the outbreak of coronavirus. They were struggling to make ends meet and sustain themselves. A resident of Lakkavaram, in the East Godavari district of Andhra Pradesh, the 29-year-old’s husband had no choice but to close his barber shop.

“We had a really tough time after the lockdown was imposed. I and my two daughters were majorly dependent on my husband’s earnings. However, his business had to be closed down. The tailoring unit where I used to work had ceased to operate due to lack of fresh orders. Just when I thought we had hit the rock bottom, the team of 1 Million for 1 Billion (1M1B) came to the rescue,” Nagasatyavati tells SocialStory.

Popularly known as Mangena Muthyalu Samajika Lace Uthpathi Kendram, the tailoring unit promptly took up an order from the government of Andhra Pradesh to produce Personal Protective Equipment (PPE) a few days ago. This was made possible with the help of 1M1B, an NGO that is focused on empowering the youth of India through entrepreneurship, especially in rural areas. Established by Manav Subodh in 2014, the organisation, along with the clothiers of the village, stood up to fight against the trying times of coronavirus by seizing opportunities to help themselves as well as the people in need.

Revival of the defunct tailoring unit

The foundation for Mangena Muthyalu Samajika was laid in the year 2017. While the District Rural Development Agency (DRDA) and Oil and Natural Gas Corporation Limited (ONGC) together pooled in all the funds to set up the unit, Nagabushan, one of the locals at Lakkavaram, donated a piece of his land to build the infrastructure.

Soon, several women from the village demonstrated an interest in learning to stitch and work at the unit. That was when some of them got acquainted with the National Skill Development Corporation’s Skill India initiative – aimed at training rural folk in vocational competencies. And, after a successful application, most of these women were taught to use sewing machines.

However, after about a year of functioning, the tailoring unit became defunct and remained so until 1M1B stepped in.

“As part of one of our programmes called Business Raja, we at 1M1B have always been keen on supporting the aspirations of rural India through certain skill development and funding initiatives. When some of our team members identified the dire state of the women working at Mangena Muthyalu Samajika, I was more than willing to lend a helping hand,” says Manav Subodh, Founder, 1M1B.

1M1B put in an all-out effort to revive the tailoring unit at a time when most of India’s migrant and daily wage workers, including the family members of these women, were losing jobs due to the COVID-19 lockdown.

The NGO worked on two fronts – capacity building and market linkages. The team at 1M1B realised that one of the main reasons for the lack of demand and new orders was the obsolete design skills of the women. Hence, they first commenced training programmes in modern clothing trends and fashion designs to upskill the women. Later, the organisation also got together with its partners to raise funds amounting to Rs 15 lakh to buy state-of-the-art cutting machines.

The next step was aimed at finding a market for them to sell their items. Unfortunately, the onset of coronavirus had changed the dynamics of demand and supply. So, the organisation had to shift its perspective too.

“While the team of 1M1B continued looking for market connects, they stumbled upon the opportunity to produce PPE for the Andhra Pradesh government. Things took off quite smoothly from there on as they submitted an application on behalf of the tailoring unit to make masks and other protective covers in bulk. And, it gives me immense joy to tell you that, today, all the women at the unit are spending eight hours a day to fulfil the order for PPEs and have become key earning members in their families,” notes Manav.

The coronavirus pandemic has been having a profound impact on the day-to-day lives of thousands of daily wage and migrant workers across the country. Impending loss of livelihoods, increased poverty and malnutrition, and urban displacement are some of the concerns 1M1B is battling.

Amid the gloom, the humble efforts of the Lakkavaram-based women, as well as the team of 1M1B, is one of hope and persistence.

Martin Luther King once said, “We must accept finite disappointment, but, we must never lose infinite hope.” The endeavour of Mangena Muthyalu Samajika serves as its epitome.