This 18-year-old awardee has helped more than 19,000 students fall in love with science 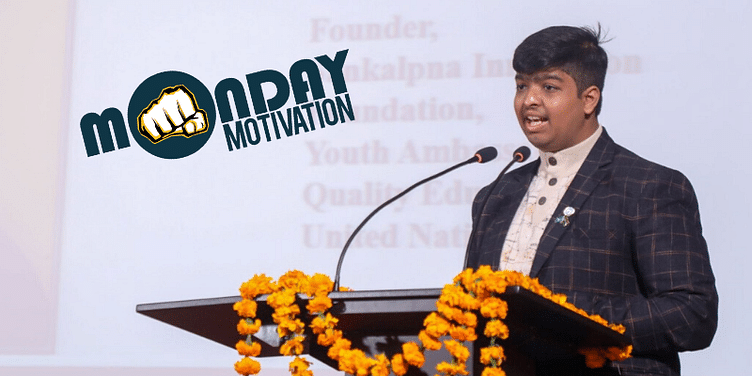 Aniket Gupta received the Diana Award, the highest accolade awarded to a young person for social action or humanitarian efforts. Through his organisation, ISTC, he aims to bring out a practical approach to study scientific subjects.

Aniket Gupta’s parents wanted him to pursue engineering, but the stream rarely offers jobs to most of its graduates in the same field. Considering himself a cell in an organ of problems, he didn’t think that his voice could bring change.

Inspired by Amar Srivastav, the Founder of the Indian Road Safety Campaign, Aniket wanted to be a part of the change in the education system.

“I was a typical Indian straight-A student who could tackle all the challenges that my academics had to offer,” Aniket tells Social Story. “But the problem was, I didn’t know how to solve the problems of the education system. Clearly, it wasn’t preparing us for the biggest examination called life.”

By the end of January 2019, Aniket, a student of Lovely Public Senior Secondary School, East Delhi, founded the ‘Indian Science and Technology Campaign’ (ISTC), which focuses on strengthening scientific skills of young minds who lose their interest in science at an early age due to various reasons such as an inadequate practical knowledge provided in most of the schools.

In recognition of his work, he was given The Diana Award – the highest accolade a young person can achieve for social action or humanitarian efforts. Aniket is one among 23 youngsters in India to have earned this award.

Taking the approach that ‘practicality is everything’, Aniket wanted to enhance the scientific temper in Indian students by building a more practical approach to the subjects.

Inspired by the cause of ISTC, his mentors helped him create the needful programmes. When the students found the cause to resonate with their own lives, they also joined hands to develop, curate and make the practical programmes reach a larger base of students, school, and teachers.

Being a school student, Aniket needed support to expand the activities and objectives to more students. At the right time, the organisation got affiliation from Vigyan Prasar, Department of Science & Technology to support the initiative, by providing a guide to create low-cost experiments and providing activity kits on different science concepts that are usually difficult to understand.

“Initially, we started with local communities and interacted with students from underprivileged backgrounds, along with doing small and easy STEM (Science, Technology, Engineering, Mathematics) activities that they enjoyed, and took a keen interest in learning more about those concepts deeply,” says Aniket.

“We all know that future jobs will require a basic understanding of science and math, but the skill scores of our students are lagging behind other developed countries,” he adds.

They started conducting activities in Delhi government schools, and in the villages of Baghpat and Meerut in Uttar Pradesh, while also training teachers on how to use the activity kits in their classrooms.

They created Vigyan Manch, a programme combining science with entrepreneurial skills to create innovative, economical, and constructive prototypes with worldwide benefits. It nurtured a scientific temper to build problem-solving skills while engaging in real-world engineering problems.

The team has successfully supported 19,000 students and 900 teachers with their practical initiatives. Aniket believes that the children enjoyed the simplification of complex concepts, which encouraged them to think outside the box.

When asked about the aid for the programme, Aniket replied, “Vigyan Prasar provides resources for the students and classrooms. To manage future fundings, we are planning to start India's first Practical Olympiad platform.”

Established in the memory of Diana, Princess of Wales, the award is given out by the charity of the same name, with the support of both her sons – Prince William, The Duke of Cambridge and Prince Henry, The Duke of Sussex.

The award recipients were nominated by adults who know the young people in a professional capacity and recognised their efforts as a positive contribution to society. Through a rigorous process, these nominators had to demonstrate the nominee’s impact in five key areas: vision, social impact, inspiring others, youth leadership, and service journey.

Nominations are judged using the Criteria Guide and Scoring Guide which have been created to measure the quality of youth social action.

“It is so overwhelming to be receiving The Diana Award and getting this privilege to be taking forward, the living legacy of Princess Diana. It was even more special because Princess Diana and her philosophies have always inspired me a lot,” says Aniket.

The road up to this point was not easy. Aniket faced multiple challenges right from the beginning when he had to convince his parents, and sustain the cause with no funding until Vigyan Prasar took over.

“With the constant support and encouragement of my team members and mentors, we have taken the initiative across the world. We have collaborated with renowned educators, collaborators, and organisations such as Swan Livelihood and Save The Children India. We are also integrating the United Nations Global Goals, Human Rights and Menstrual Hygiene Education in classrooms to help the children become global citizens,” he says.

Aniket wants to establish an organisation that gives wings to ideas of students, explore every field, and sharpen their skills irrespective of their conditions.

Academically, he plans to pursue Engineering in Mathematical Innovation and Computing. He is also writing a book on human rights and sustainable development goals in Education to make it interesting and engaging.