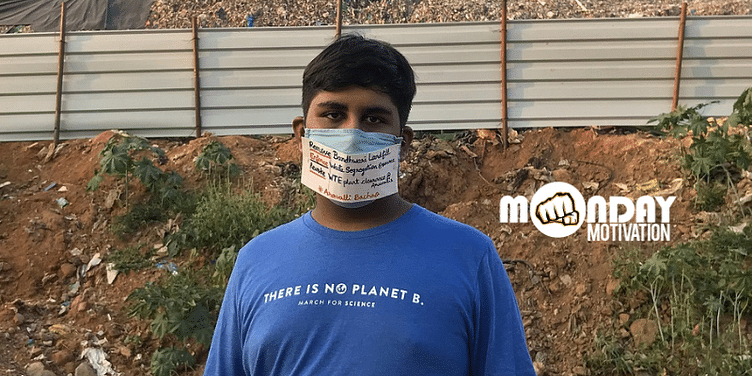 Aditya Mukarji, a student of Gurugram’s The Shri Ram School, is working to rid the world of single-use plastic. His door-to-door campaign led 150 restaurants and cafes in NCR to go plastic-free and averted the use of more than 26 million plastic straws.

The next time you walk into a café at Delhi’s Khan Market to takeaway a cold coffee or a milkshake, it would most likely not be accompanied by a plastic straw.

This could be because of the efforts of 16-year-old Aditya Mukarji, a school student who believes that single use plastic is “one of the most dangerous inventions by man” and is trying his best to weed it out.

All single use plastic items, be it straws, bottles, wrappers, sachets, and other packaging material, are made from polypropylene, a material that can neither be degraded nor recycled easily. They keep piling up and have irreversible damaging effects on the environment. Among all these, plastic straws are a common sight in landfills, owing to the numbers used across the country.

Aditya decided to act as soon as he realised the magnitude of the problem. The Class 11 student of The Shri Ram School, Gurugram, embarked on a door-to-door campaign in and around NCR to spread awareness about plastic, its detrimental impact, and eco-friendly alternatives.

A study by Un-Plastic Collective (UPC), a voluntary multi-stakeholder initiative to eliminate plastic pollution, reveals that India generates 9.46 million tonnes of plastic waste every year, out of which a whopping 40 per cent remains uncollected. Delhi is on top of the list among all the metros, with the production of 689 tonnes of plastic litter annually.

“Its repercussions are evident in our daily lives - from clogging, choking animals, and effects on human health. Sadly, a lot of people are ignorant or careless when it comes to using plastic. So, I was determined to do my bit,” Aditya Mukarji tells SocialStory.

In two years, he has been able to avert the use of more than 28 million plastic objects, including straws. He achieved this by persuading around 150 different commercial establishments to go plastic-free.

Born and brought up in the financial and technological hub of Gurgaon, Aditya learnt about environmental issues such as global warming, climate change, pollution, and resource depletion as he grew up. His parents also often spoke about the importance of conserving natural habitats.

“My parents have always believed in sustainable living and I grew up inculcating these thought processes,” Aditya recalls.

When Aditya was 14 years old, he began volunteering with Chintan Environmental Research and Action Group, a non-governmental organisation that works towards environmental justice in collaboration with individuals, citizen groups, and institutions.

He worked on projects related to sustainable production and scientific waste disposal. He led the Plastic Upvaas event in November 2018, held in partnership with the Canadian High Commission, to urge citizens to live without single-use plastics for a day and then give them up altogether.

Aditya was appointed youth mentor in August 2019 for a campaign organised by the Chintan group along with National Geographic:  “A Million Yays for the Oceans and a Million Nays for Single-use Plastics”. He was also actively engaged in a slew of waste segregation drives, and plastic awareness campaigns at PVR Cinemas and Dastkar in Delhi.

A few months after he began working with the NGO, Aditya noticed the high use of plastic in many hotels, restaurants, cafes, and juice shops in posh localities around Delhi.

“They were using an astounding number of single-use plastic items. Plastic straws with fresh fruit juice and milkshakes; plastic boxes and cutlery for takeaways, and much more. I decided to do something about it,” Aditya says.

He went back home and spent hours researching the composition of plastic, its disadvantages, and eco-friendly alternatives, and made a PowerPoint presentation of his key takeaways.

“I wanted to convince people and establishments to do away with plastic. So, I went to DiGhent Cafe in Gurgaon with the presentation and spoke to the manager and people in the café. I appealed to them not to use plastic straws and explained the viability of using sustainable ones made of steel or paper,” he says.

Aditya was overwhelmed to receive a positive response, and gained the confidence to approach many more such places. He never looked back.

He went on to suggest suppliers and manufacturers from whom restaurants and cafes could procure alternatives to plastic.

The schoolboy started out with a goal to eliminate 50,000 plastic drinking straws, but managed to keep 26 million straws and two million other plastic items from getting dumped in landfills.

This school in Assam accepts plastic waste as a fee, creating environmental awareness among the local community

Using the power of social media

With social media being one of the most powerful tools to reach out to the public at large, Aditya created a Facebook group, The Alternatives, to talk about the detrimental effects of plastic and how its consumption can be reduced.

When asked about the obstacles he had to deal with, he said,

“Initially, it was tough to strike a balance between my academics and activities. I used to work after school and even on weekends. It was hectic, but I kept myself motivated.”

Recently, Aditya kicked off an afforestation initiative, Forest of Hope, to boost the planet’s green cover. For this, he has tied up with national and global organisations to run plantation drives within their campuses.

Reimagining plastic recycling: Meet the IAS officer from Hyderabad who is paving the way for better waste management in her city

An inspiration for young minds

The 16-year-old is one of 17 young environmental activists from across the globe to have been honoured by Action for Nature (AFN) as a 2020 International Young Eco-Hero.

Aditya was recently given the opportunity to intern with the United Nations Development Programme. The UN usually does not accept interns below the age of 18, but made an exception.

“After my internship, I was invited to speak at the UN headquarters in India about my work and initiatives to promote a plastic-free culture. In September 2019, I was asked to be a part of the UN Youth Climate Action Summit in New York. Here, I got a chance to not only interact with UN Secretary-General António Guterres, but also join Greta Thunberg in the march,” he says.

In the future, Aditya will continue his endeavour to make the world a cleaner and greener place. He believes that youngsters can do a lot to help resolve environmental problems.

“It is imperative for youngsters to come forward and tackle environmental problems for a healthy and safe future. Every small step can take us a long way,” Aditya says.