Humanity First: How these volunteers are saving lives by connecting COVID patients with plasma donors 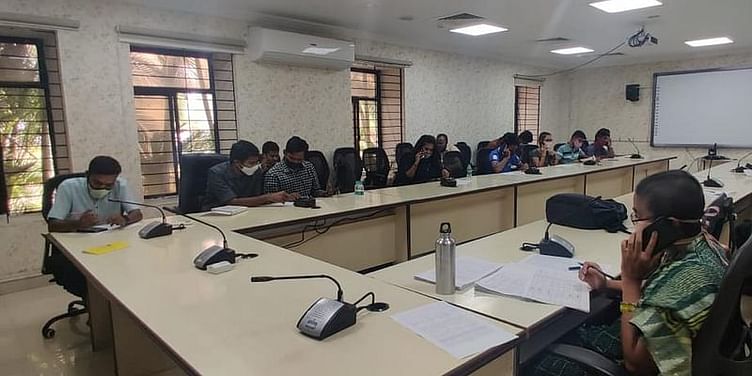 The members of the Aikyatha initiative are finding plasma donors and connecting them to recipients in association with the Cyberabad Police Department.

The second wave of the coronavirus pandemic has hit India hard. According to the Ministry of Health and Family Welfare, India has nearly 30 lakh active COVID cases, with over two lakh deaths.

While the first wave of the pandemic set many new challenges to the healthcare ecosystem, during the second wave, there has been an increasing number of COVID cases and deaths in India. As the demand for plasma has increased manifold, there is an acute scarcity of donors.

To connect eligible plasma donors with recipients, a group of NGOs and CSOs came together last year and formed the Aikyatha Initiative in Hyderabad. Started in July 2020, the initiative is supported by the Cyberabad Police Department and the Society for Cyberabad Security Council.

Vikas Katragadda, Founder and Convenor of Aikyatha, says that in the end, there are only a small fraction of people eligible to donate plasma in India.

“We have plasma donors who have donated more than 15 times. After their experience of going through COVID-19, they wanted to help those who were struggling to cope with the disease. They came forward with apprehensions, but learning that there was no giddiness or tiredness after donating, they went ahead to make donations and continued to do so,” says Vikas, who is an engineering graduate from BITS Pilani Goa Campus, and a civil service aspirant based in Hyderabad.

Anyone above the age of 18 years and above 50 kilograms can donate plasma after recovery, provided they don’t have any other health issues. On the other hand, pregnant women and people with diseases like diabetes and blood pressure variations, cannot donate plasma.

During the week, about 40 volunteers from Aikyatha make 1,000+ calls every day to those who recovered from plasma, and over the weekend, about 60 volunteers reach out to about 1,500+ potential donors. These volunteers work from the office of the Police Commissionerate.

If required, they also arrange for a Cyberabad police vehicle to pick up the donor, get their antibody test done, take plasma if the antibody count is more than the threshold, and drop them back home.

“In the second wave, there is a lot of fear among people. People are thinking twice about going to hospitals because of the increasing number of cases. Moreover, their families hold them back from donating, fearing they may catch the virus again,” shares Vikas.

Commissioner VC Sajjanar of the Cyberabad Police Department is helping the team by connecting them to various resources and finding eligible plasma donors. The team then contacts these people to know whether they wish to donate plasma. At the end of the day, the team makes a list of donors who are ready to donate and connects them with the ones who have a requirement.

“We are trying to convince the plasma donors and get their help. For those who are not confident enough, we connect them to those who have donated plasma multiple times, which helps them be more confident,” shares Vikas.

“Moreover, the support we have been receiving from the police department is immense, and it helps us build trust among people,” he adds.

The efforts of volunteers have also been consistent. One of the volunteers, who is visually impaired, actively joins in making calls. Many others, who are fasting during the month of Ramadan, are also active members.

Talking about some of the challenges, Vikas shares that bringing together different organisations and building this synergy was difficult. “But once done, we observed from experience that unthinkable can be achieved,” he says.

Aikyatha in the first wave

In the first wave, the Aikyatha team started addressing food requirements by engaging about 450 volunteers on ground, and giving volunteer support to Akshaya Patra. They helped in packing and distributing about one lakh grocery kits.

“As part of that, we procured 25 tonnes of sweet lemon directly from farmers, which helped them immensely as there was no interstate trade and they were under extreme distress,” says Vikas.

The team’s immense efforts served over 24,000 people in the first wave.

Humanity First: Amid COVID-19, this humanitarian is back on the streets distributing food, oxygen

It is not only the volunteers, but even plasma donors who have come forward and are part of the initiative.

One of them, Nithin, was one of the first COVID-19 cases in Hyderabad. At the time, he didn’t know much about the disease. But now, Nithin has donated plasma about 12 times, last donation being in October.

“A lady called me and she was crying uncontrollably saying she needed plasma for her brother-in-law. I went to the Century Hospital. I was very scared, and I asked my sister, but she encouraged me to go,” Bhaskar says.

While they were grateful for Bhaskar’s help, the recipient, unfortunately, could not be saved. Though it was a tragic moment, Bhaskar didn’t lose hope. He even donated twice within a week’s gap.

“It is inspiring to see these individuals come forward and donate plasma. We hope more people will join us in this mission and help battle the virus,” shares Vikas.

7 unsung heroes who battled disability to achieve their dreams

9 stories that makes us feel thankful on this Thanksgiving Day