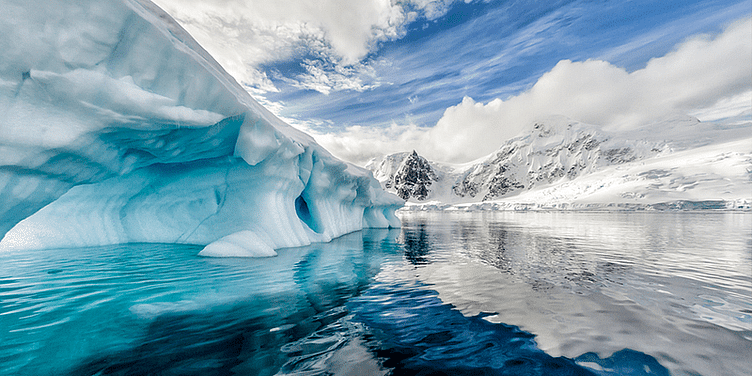 When the Antarctic Treaty came into effect 60 years ago, its signatories had little idea how successful it would be.

World leaders agreed to leave an uninhabited continent twice the size of Australia free from war, weapons, and nuclear waste. They declared that the southern polar region — which is 98 percent ice and does not have an indigenous population — should belong to no country and instead be devoted to collaborative science.

In the following decades, extra rules to stop companies mining minerals and drilling for oil turned Antarctica into the biggest nature reserve in the world.

About 90 percent of the world's surface freshwater is locked up in the Antarctic Ice Sheet, and as the planet heats up, glaciers, whose collapse would deluge coastal cities from New York to Jakarta, are melting and growing less stable.

World leaders have pledged to limit warming to well below 2 degrees Celsius this century, but their current policies will heat the world by almost 3 C, according to Germany-based research group Climate Action Tracker.

A study published in the journal Nature in May found that a global temperature rise of 3 C would lead to an "abrupt jump" in the pace of Antarctic ice loss that would, in turn, trigger "rapid and unstoppable" sea-level rise.

A second study, published in June in the journal Science Advances, found that an ice shelf that supports the 175,000-square-kilometer (68,000-square-mile) Pine Island Glacier is breaking up into the water faster. The glacier is responsible for more than a quarter of Antarctica's contribution to global sea-level rise and will melt faster if it collapses into warm waters.

"If the ice shelf's rapid retreat continues, it could further destabilise the glacier far sooner than would be expected," the authors wrote.

Alessandro Antonello, a historian at Flinders University in Australia who has written a book about environmental politics in Antarctica, said, "The central environmental challenge to Antarctica today is undoubtedly climate change."

Yet, of the 54 parties to the treaty that protects it, the 29 with voting rights include the world's biggest historical polluters, such as the US and Germany, as well as fast-growing emitters like China, India, and Brazil.

"There is definitely a level of hypocrisy," Antonello added.

The Antarctic Treaty was signed in 1959 by 12 countries whose scientists had been active in the region and entered into force two years later. The parties agreed that the region should be "a natural reserve, devoted to peace and science."

For superpowers such as the US and the then USSR — who would go on to fight proxy wars across Asia, Africa, and South America over the next three decades — the Antarctic became a place of cooperation that offered a rare respite from the nuclear tensions of the Cold War.

In other diplomatic spaces, representatives from these countries "would pound their chests and yell," said Sridhar Anandakrishnan, a glaciologist at Penn State University in the US. But, in the Antarctic Treaty meetings, "they could formally, officially, and openly talk."

For scientists, cooperation meant refuelling planes at bases of other countries — essential in such a hostile landscape — and sharing findings. Teams of scientists in the Antarctic have collected climate data stretching back hundreds of thousands of years, and in 1985, they discovered a dangerous hole in the ozone layer above it.

Everybody in Antarctica is there for "altruistic reasons," said Anandakrishnan, who has been on 23 scientific expeditions to the region since 1985. "We're there for something that we hope is larger than ourselves and is in service of society."

Polarstern team warns Arctic may be past tipping point

Earth's polar regions are warming faster than the rest of the planet. But, unlike the North Pole, which has become the focus of geopolitical tensions as melting ice reveals rich resources, the South Pole has few known minerals or fuels to exploit other than some reserves of coal and oil. That has helped shield it from the attention of extractive industries.

Still, the Antarctic is big and similar enough to nearby geological areas to likely be home to more resources. Together with the region's inhospitable landscape — with thick ice and harsh weather making any commercial extraction costly — the Treaty's 1991 ban on mining and drilling has kept Antarctica free from anything other than scientific exploration.

The ban is indefinite and may first be reviewed in 2048. But the picture is less rosy for the waters around it.

"Climate breakdown is drastically changing the very scenery in the Antarctic, said Laura Meller, an ecologist and polar expert with Greenpeace Nordic, which successfully campaigned to protect the region from mining and drilling. "For life in the water surrounding the continent, that is a drastic transformation."

Species such as the Patagonian Toothfish are still being hunted unsustainably in the Southern Ocean surrounding the Antarctic. Seabirds like albatrosses and petrels get caught up in huge nets as bycatch, which gets thrown away.

Krill fishing has also boomed, with fishers catching 400,000 tons from the Southern Ocean in 2019. The creatures — a cornerstone of the Antarctic ecosystem eaten by penguins, seals, fish, and whales — can only survive in a narrow temperature range and are a buffer against climate change.

They store carbon dioxide by feeding on carbon-rich phytoplankton at the surface of the ocean and raining dense faecal pellets down to the bottom of the ocean, according to a paper published in the journal Nature in 2019. Biological processes like this store an estimated 5 to 12 gigatons of CO2 in the oceans each year.

The Antarctic Treaty protects the land ecosystem but does not govern marine life. That is regulated by a related commission, which came into force in 1982. It sets catch limits on krill fishing, though these do not account for population loss through climate change.

What is less secure is how well the treaty protects animals such as penguins, who spend most of their time in the sea but come onto land for breeding. "There is a grey area," said Ricardo Roura, a polar regions specialist and senior adviser for the Antarctic and Southern Ocean Coalition (ASOC), which represents conservation groups in the region.

The legal uncertainty also applies to tourism. Antarctica receives about 70,000 tourists each year, mostly in the summer. While this is low relative to the size of the continent, they mostly go to the same several dozen locations, which concentrates their impact.

Waste in Antarctica doesn't disappear: The region is so cold and dry that it is unlikely to break down or get carried away until a glacier eventually melts and washes it into the oceans. Scientists in the region are already going through a mindset shift in how they deal with waste, said glaciologist Anandakrishnan. "You're saying to yourself, do I really want to dump the candy wrapper here that's going to choke a seal ten thousand years from now?"

But, as tourist numbers grow, enforcing the Antarctic Treaty protections may become increasingly tricky. Antarctica has no police force, and without a sovereign government, it is still unclear who would pay for the damage done by foreign visitors in the event of large-scale disasters like an oil spill from a grounded ship.

Still, as an example of global cooperation, the Antarctic Treaty has not been matched — though some experts are sceptical that it could be replicated in today's political climate of rising populism.

"It would be seen as globalisation, which it is," Anandakrishnan said. "It wouldn't have a snowball's chance in hell of being passed today."

(This article by author Ajit Niranjan was originally published on Deutsche Welle.)