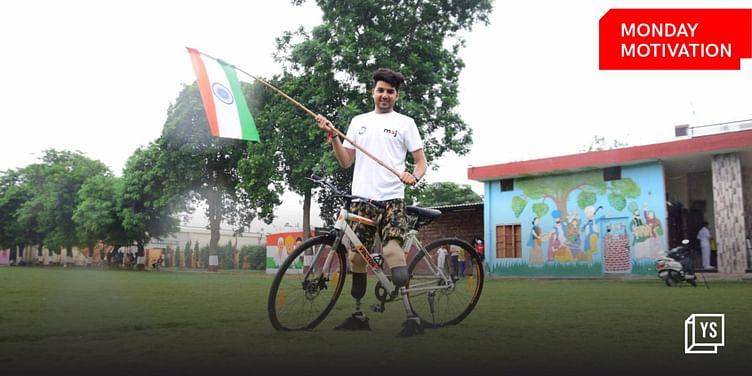 Ablu Rajesh Kumar lost his legs in an accident at the age of 13. Today, the 25-year-old has opened his own dance academy and is a record holder in cycling.

Ablu Rajesh Kumar was just 13 years when he met with an accident at Amritsar Railway Station. His reckless decision to cross the railway tracks in fear of missing the train cost him both his legs, which changed his entire life.

“I was unconscious for nearly 18 hours as a result of the trauma. The doctors told me that I would only be able to walk on crutches or spend the rest of my life on a wheelchair. I was in a lot of pain in the beginning and tried multiple prosthetics. But I vowed to make my weakness my strength and not let the accident keep me from living my life to the fullest,” Ablu recalls.

While losing legs at such an early age posed a challenge for Ablu, it also made him mentally strong. He decided not to give up on his dreams and worked towards his love for dancing with the help of prosthetic legs.

Ablu says, “I told myself then that I will not give up my dreams because of one accident.”

Today, the 25-year-old from Amritsar has come a long way. He is a dancer, choreographer, content creator, and a cyclist.

Recently, on the 15th of August, when the country celebrated Azadi ka Amrit Mahotsav, Ablu rode a bicycle for 1 km holding the Indian National Flag and set a record, proving that he was bigger than his disabilities.

Not giving up hope

Dancing has always been Ablu’s passion. After his accident, he never gave up hope of pursuing his passion for dancing.

To begin with, Ablu got prosthetic legs and trained his body and learned how to dance again. He started practicing by watching dance reality shows and then enrolled at an academy in Amritsar to hone his dancing skills.

Through perseverance, Ablu became a choreographer and started uploading his videos. It was not long before Ablu gained popularity and began inspiring people to pursue their passion.

“My dance instructor Preeti taught me a variety of dance styles. Eventually, I began uploading videos to Moj, where my videos went viral, and I was able to reach millions of people across India. It was a very proud moment for me because I was able to inspire people to never give up on their dreams and demonstrate that nothing is impossible.”

“Many people approach me and tell me they saw my videos on Moj and that I inspire them to always be hopeful and make the best of any situation,” says Ablu.

Ablu shares that his father had a great influence on him. Growing up, watching him cycle and stay fit inspired and pushed Ablu to do the same.

However, because of his condition, it appeared complicated at first, but he practiced cycling consistently until he felt confident.

“I must say that achieving a seemingly impossible goal provides an unparalleled sense of fulfilment. Cycling became my passion quickly. Thanks to consistent practice and perseverance, I began to enjoy it just as much as dancing.”

Recently, the specially-abled achiever rode a bicycle for 1 km holding the Indian National Flag during the 75th Independence Day. This won him a place in the prestigious International Book of Records for ‘the longest distance covered by cycling with prosthetic legs holding the Indian flag’.

Ablu says, “Initially, even walking with my prosthetics was a task, let alone cycling or dancing. However, today I can dance, run, walk, and also cycle. I was willing to put in the effort, but all I needed was help with planning, which Moj provided along with being my cheerleader throughout this adventure. Once I felt fully prepared, I set out to break this record not only to celebrate our nation's freedom, but also to celebrate my freedom from the fear of being differently abled.”

In addition to being a full-time content creator and influencer, Ablu has also founded ‘Ablu Rajesh Dance Academy,’ an NGO for the underprivileged kids, where he teaches dance for them.

“I train underprivileged children from nearby areas for free. The sessions are usually held between 5 and 7 in the evening, and about 10-15 students attend my classes. I am overjoyed to see the academy gaining traction and being recognised by an increasing number of people in the city. I also intend to open my own dance studio, where I hope to teach many more such dance enthusiasts,” Ablu shares.

Ablu’s advice to the people is that nothing is impossible if you keep trying. It is primarily about one's attitude toward the task at hand. Things may appear difficult at first, but one must always remember that ease comes with time.

He is now practicing to establish a record of cycling 10 km with prosthetic legs. When he is better equipped, he also wishes to attempt climbing the Mt. Everest.