This is how Kulturemint wants to change how you consume art 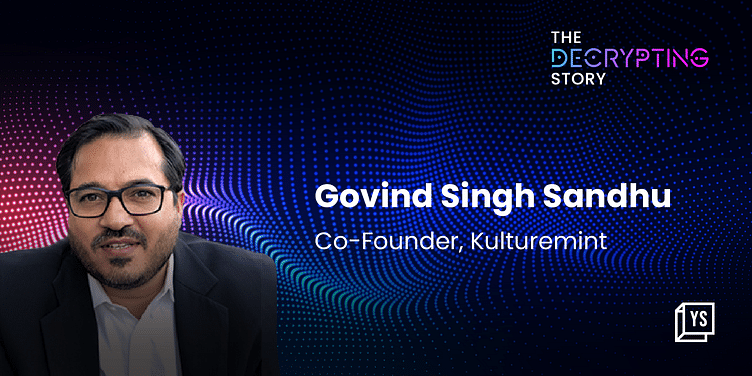 Govind Singh Sandhu, co-founder of Kulturemint talks to The Decrypting Story about launching the NFT marketplace which wants to bring more artists onto web3.

At the peak of the Non-Fungible Token (NFTs) craze, projects with celebrities and sports were all the rage. Most investors who got into NFT trade during this period were driven to collect these highly profitable assets, many of which had no underlying value.

In some cases, art was also ‘sacrificed’ in this pursuit of profit. A rare piece by British street artist Banksy was burnt on a livestream and later sold as an NFT for nearly $380,000.

While social media platforms such as Instagram have made it easier for artists to express themselves, this is yet to make its way through to the next generation of the internet—Web3.

This is where entrepreneurs Govind Singh, Archana Trasy, and Gautam B Thakker step in, with their vision for a marketplace exclusively for artists called ﻿Kulturemint﻿.

To the founders, the idea is simple; building on the passion economy, which refers to the idea of converting one’s passions or skills into a monetisable ability.

The first step was introducing Urdu poet Gulzar and his timeless work such as Baarish (rain at night), Lal Haveli (The Red Bungalaw), One-Sided Love, and Samundar (Ocean) as one-of-a-kind NFTs. Kulturemint also looks to bring on board a variety of people from poets to journalists in the near future to build on its idea of creating a bustling community of artists on web3.

Kulturemint’s idea came to the trio shortly after the pandemic-induced lockdowns. “We were having coffee at the Starbucks near Siddhivinayak in Mumbai and we were discussing culture, poetry, and new-age technology,” Govind says.

A meeting meant to rekindle old friendships and reminisce upon the entertainment industry the three had previously worked in quickly turned into a brainstorming session. At first, the idea was to launch on Instagram, says Govind.

“But then, Gautam came up with the idea of creating a NFT marketplace, which is when we decided to launch Kulturemint," he adds.

On a technological level, Kulturemint is just like any other NFT marketplace. Users can sign up with a crypto wallet, plug in and buy any collection that catches their eye. But the NFTs sold are not limited to a digital asset.

Users get a physical version of the piece delivered to their doorstep upon purchasing a token. Govind explains, “We have taken Gulzar’s handwritten poems and turned them into NFTs. And when users buy the NFT, they also get the actual handwritten poem framed. So, it's a physical collective asset as well.”

To maintain exclusivity for some pieces, it also has a live auction feature where artists can set a fixed price or use the platform's bidding engine to set a base price. Bidding remains open for only 24 hours once it is placed.

In keeping with its idea to build on passion economies, Kulturemint gives artists the ability to experiment with the form, publish, and earn money directly without intervention of traditional publishing houses as gatekeepers. Artists also get 6% royalties on secondary sales of an asset.

This idea has appealed to quite a few artists like Nerissa Dcosta, Preeta Sinha, Siddharth Khandelwal, KANYA, The Flower Star, Emelie Patten, and Hanee Chavan, all of whom are using this medium to address different socio-political or cultural issues via art.

For instance, Preeta Sinha's Mahasagar (Ocean), depicts a turtle struggling to swim as it falls prey to a polluted ocean, taking on the daunting question of climate change as its central message.

To keep things fresh, it brings out a curated list of featured artists every 45 days and users are welcome to visit and mint artwork that is presented to them.

It supports a number of different blockchains, including Polygon and Ethereum. Payments for these NFTs can also be made through MATIC.

NFTs have had their worst run in the year so far, with sales tanking at an all time low. But despite prevailing market conditions, Govind remains optimistic about Kulturemint’s success. “We are not worried about the NFT volumes being down, because I think inherently, if you do have a good collectible, it will still get sold,” he says.

At present, the startup operates on a Business to Consumer (B2C) model and charges a 15% commission on all commercial transactions on the NFT sales.

Kulturemint does, however, face some other challenges. For one, it is required to educate artists about the platforms and its features.

“Most people are not aware of it. So, there is a lot of work to be done on community development and market education, which is pretty difficult right now, because of the lack of regulation around crypto,” says Govind.

Recently the startup raised an undisclosed amount and is in talks with talent management companies to onboard artists. Besides artists, it also has plans to sell film or TV series scripts as NFTs on the platform.

“The trick is to pivot yourself into creating a richer ecosystem with the utility around NFT, that is the long term vision,” says Govind.

(This copy was updated to correct a spelling error).