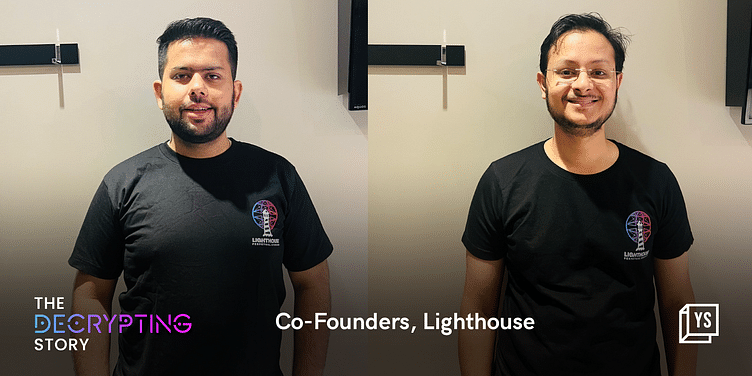 Lighthouse is a blockchain startup allowing users to store files in a decentralised manner, where customers pay only once and store files forever. Here’s how:

Do you know where the data is streamed from when you watch a movie or TV series on Netflix? Hint: Not Netflix.

Besides AWS, the likes of Google Drive and Dropbox have also emerged as popular storage options. However, one can’t store files on these services for free indefinitely.

Nandit Mehra—a software engineer and full-stack developer—noticed that these services required recurring payments for storing files, irrespective of how often they were used. This called for a permanent file storage service for users to only pay once and store their files forever.

His solution is ﻿Lighthouse Storage﻿—a blockchain startup developing a protocol to store files perpetually (or through a permanent ownership model). It enables users to interact with, pay for storage, and get a verifiable record of storage through Ethereum, Polygon, BNB Chain (previously BSC), Fantom, Optimism, and more.

“Existing centralised storage services charge users repeatedly. But it is not so simple to build a decentralised alternative on the blockchain as transactions are permanent but files are not. One cannot efficiently store files on the chain itself,” Nandit tells The Decrypting Story.

Instead, he envisioned storing data on a protocol built across a distributed network of storage providers connected to the chain.

But Lighthouse does not need to build this network from scratch.

The startup facilitates permanent storage of files on Filecoin—a system of persistent data storage built on IPFS (InterPlanetary File System), which is a decentralised network to store, request, and transfer data. Both are complementary networks built by Protocol Labs.

Some of the other protocol-level players in the decentralised storage segment include Arweave, BitTorrent, Safe Network, Sia, and Storj.

Lighthouse leverages Filecoin’s storage providers to allow storage and access for image files, video, text, documents, etc. Additionally, it allows developers to build decentralised apps on top of it to retrieve data from its storage network.

“The focus right now is on developers and Web3 use cases. People can directly upload files, store, encrypt, and even tweak access control to share and revoke access to specific files. Building an end consumer-facing app may make more sense down the line, but as of now, we allow developers to store, access, and retrieve Web3-related data and metadata,” Nandit explains.

An end-user of Google Drive or Dropbox typically does not access, stream or download a majority of their stored files on a daily and real-time basis (they still have to keep paying for the service). As such, they have no major and direct need for instant file retrieval.

However, when the same user watches a movie on Netflix, they demand the service instantly retrieve and stream high-resolution video from AWS servers. Therefore, Netflix has a stronger use case for on-demand storage, and so is the case in the Web3 world.

So far, Web3 projects such as AIVerse, Metawork Labs, Organik 3D, and some others have been using Lighthouse for storage. Files Dapp—a login service for Lighthouse—has already seen over 1,000 wallet addresses registered for the storage network, the startup claims.

Lighthouse’s decentralised storage model offers a few advantages over Web2 alternatives. It allows users to pay once and store forever—which is made possible by running an endowment pool whose job is to assist in paying for user file storage till perpetuity.

This is critical for applications where users need to pay to keep ownership of their assets (such as NFTs).

“Our endowment pool comprises stablecoins like USDC and USDT, making it less volatile than other pools which may contain other types of crypto. This is one key difference between us and Arweave—another leading decentralised storage network—which features its AR token in its endowment pool,” Nandit says.

Lighthouse’s endowment pool involves staking, accruing fees, and interest on the storage cost paid by the user, which leads to a lower fee than other storage solutions, he claims.

While users have to leverage other tools to build a full application in other decentralised storage solutions, Lighthouse has everything on one platform, he notes, offering users more in terms of encryption, access control, and the ability to serve files directly from its base storage protocol.

The protocol also allows storing private files with options to share and revoke access to encrypted files. It also restricts access to token-gated resources without the need to manage keys on their own.

The startup also enables developers to replicate files globally near a user's location, leading to faster load times when channelled through a dedicated, custom IPFS gateway.

Decentralised storage’s censorship-resistant nature is both a feature and a bug. It allows users to not only store data without risk of censorship, but also upload illegal or malicious content across multimedia formats.

Nandit admits that dealing with illegal content is a big problem but underlines the progress made so far in blacklisting user IDs previously found guilty of malicious activity.

“The IPFS and Filecoin networks are figuring out ways to deal with inappropriate content uploaded on them, but it’s a difficult task. Even if miners are disincentivised to host illegal content, they can still make a copy of it,” Nandit says, adding,

“At Lighthouse, we encrypt and distribute data with specific access control, so even if miners have a copy of illegal content, it is practically useless for them. But there is still a long way to go in ensuring illegal content and data does not make it onto the chain.”

This Web 3 startup has built a developer-friendly stack for secure, privacy-focused apps

Lighthouse’s permanent storage proposition—where users pay only once and the files are stored forever—is perhaps its most attractive feature. But the upfront cost—which can be anywhere between $2 to $5 per GB of data—is significantly more expensive than Web2 services, which charge a fraction of a dollar per GB every month.

“We are yet to arrive at a final price per GB of data, but in the long run, the cost of storing one GB would work out cheaper than Web2 alternatives that require payment each month. But we realise it does not make sense for everyone to pay a high upfront cost to store files permanently. For some, it does makes sense—such as a Web3 project that is already making revenue—and this is what we’ve been focussing on,” Nandit says.

Lighthouse is also going to offer users the option to pay for up to ten years, and position itself more as a ‘perpetual’ storage protocol rather than a ‘permanent’ one. “Even with this model, storing data in the long term would work out cheaper,” he claims.

He also adds that any direct comparisons with the likes of AWS, Google Drive or Dropbox are difficult and tricky because not all of them serve content on the web. Google Drive and Dropbox, for instance, do not allow developers to stream content on their web apps.

“More comparisons would be possible only at a later stage when our network goes fully live, we start offering perpetual storage options, and focus on end-users. Till then, we are looking to build our infrastructure and ecosystem, as well as consider raising another round of funding. We also aim to onboard more talent and build out our marketing and business development teams,’ he signs off.