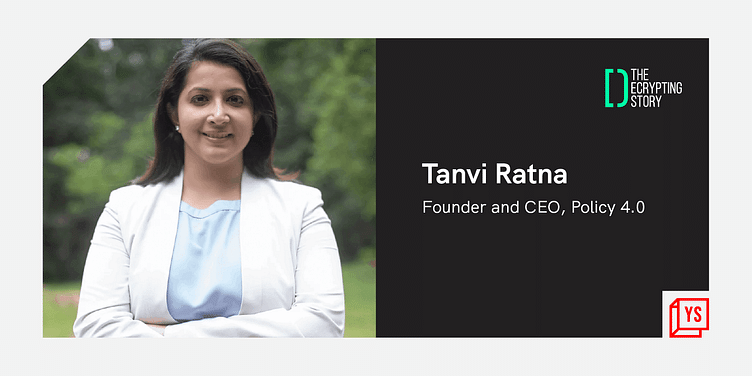 Tanvi Ratna, Founder and CEO, Policy 4.0, has built experience in policy advisory in emerging technology and innovation, and is making a mark in India’s crypto regulation story with her Bengaluru-based think tank. Here’s how:

2022 is likely to be a critical year in India’s crypto story as the government inches closer to introduce a framework to define and regulate cryptocurrencies.

However, issues related to enforceability of any upcoming regulations could remain a challenge due to the cross-jurisdictional nature of crypto.

Looking to find a solution to this issue are Policy 4.0, a Bengaluru-based research and advisory body and think tank, and its founder and CEO Tanvi Ratna, who have proposed that crypto wallets and custody management of keys are the way forward for crypto regulation.

Not only did Policy 4.0 and Tanvi propose a KYC-compliant ‘India Wallet’ solution for managing crypto activity in late 2021, but also have been working actively with policymakers, regulators, financial institutions, etc., for the last two years to merge technical, legal, monetary and policy perspectives related to blockchain and digital currencies.

“Cryptocurrencies have many use cases, and looking to regulate them differently based on the use cases can get messy. At Policy 4.0, we looked at it from a first principles approach, i.e., crypto assets are key pairs comprising public and private keys,” she says.

The think tank maintains that as a pragmatic approach, the first regulatory focus should be on wallets (which store keys), and the onus should be on citizens to get a verified India Wallet. Crypto players then have to onboard verified wallets into their platform.

[2022 Outlook] Top 5 expectations from the blockchain and Web 3.0 industry

The proposal for such a wallet, which could address some of the current regulatory challenges in the space, has come on the back of Tanvi’s extensive experience in policy advisory in emerging technology.

After her Bachelor’s in engineering from Georgia Institute of Technology, Tanvi completed her Master’s in public and foreign policy from Lee Kuan Yew School of Public Policy (National University of Singapore) and Georgetown University,

“My family is full of engineers and doctors. But I was always interested in policy around disruptive innovation, especially in India. I also did a few internships, such as an internship with the Ministry of External Affairs on energy and oil research, and a stint with Sam Pitroda - Advisor to the Prime Minister of India - on national innovation,” she adds.

Between 2011 and 2012, Tanvi worked on Capitol Hill as an analyst in the foreign affairs committee when Hillary Clinton was Secretary of State in the US. Although she could have pursued a career in the US, Tanvi’s heart was set on building the future of innovation in India.

“Back then, I always felt India didn’t live up to its potential. Further, in India, policy always stopped at politics. So when Hillary was stepping down, I decided to return to India and work on the future of India in tech,” she says, adding:

“I could have gone to Silicon Valley to build a startup, but for me, working in policy was the biggest difference one could make in the world.”

The move to India

Leaving her US career behind, Tanvi moved to India in 2012 and worked with the Citizens for Accountable Governance - a team working on election campaign strategies.

Not one for hardcore politics, Tanvi found herself drawn to EY’s portfolio for government and public sector advisory - which she took on for four years. In fact, it was during her stint at EY that she began her journey into the blockchain world, which eventually led into digital currencies and crypto.

“I was looking into smart agriculture when a World Bank bid came in for a blockchain project in agricultural credit. I took a shot at a case study and sent it to them. It was a huge surprise when they shortlisted my letter. Although we didn’t get the bid, it set the stage for many other blockchain-based projects at EY to come to me,” she says.

Tanvi was burning the midnight oil and progressing well in her career, and was in line for a double promotion, when she received a sudden reminder not to ignore her health.

“One morning, I woke up with a slipped disc, and couldn’t move at all for six hours. The experience changed me and led me to move out of EY as I began a long journey of healing. At this point, I thought my work in policy was over,” she says.

After regaining her health, Tanvi soon had a chance to work on Karnataka’s blockchain policy, which didn’t see the light of day due to the RBI’s crypto ban in 2018.

In response, she drafted a whitepaper on the benefits of public blockchains, which caught the attention of New America, a US-based think tank that allowed her to gain experience at the forefront of national crypto frameworks being built in Switzerland, France, Germany, UAE, and other countries.

With all her experience thus far in the policy, blockchain, and digital currency space, Tanvi was determined and inspired to launch her own think tank and advisory firm to focus on innovation policy and research.

“This led me to start Policy 4.0 in Bengaluru in 2019. Although the launch was delayed due to COVID-19, a small team of us worked on and released a report on China’s digital yuan,” she says, adding:

“The report was launched in 2020 alongside some key roundtables and discussions we organised, which were attended by senior leaders in the segment. We also did some regulatory clinics for Indian DeFi projects, where the regulatory challenges in question inspired us to make a difference in regulating this new technology in India.”

At this point, Tanvi and team decided to simplify the process by looking at crypto through a first principles approach and came up with the idea for an India Wallet.

As per Policy 4.0’s report, the India Wallet is a potential solution that can be built for ensuring one-time KYC compliance, managing cross-border crypto flows, and acting as a gateway to India for crypto businesses.

“So far, government officials and the crypto industry have been receptive and appreciative of such a proposal,” Tanvi claims, adding that the overall goal, moving forward, is to figure out a way to regulate blockchain and crypto tech in India instead of being afraid of it.