What are top VCs looking for in a Metaverse startup 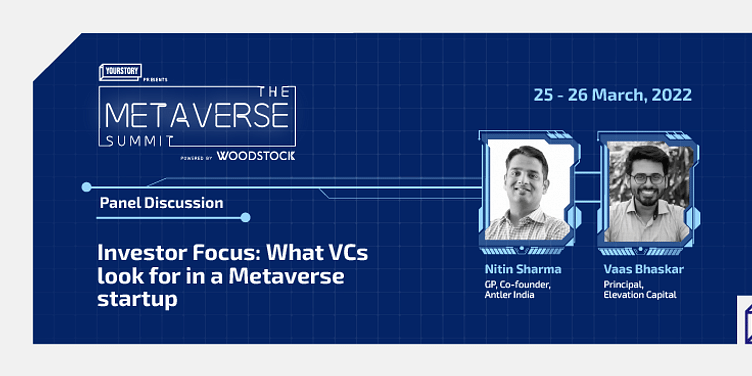 At YouStory’s Metaverse Summit 2022, we had the stalwarts of the metaverse VC world– Nitin Sharma from Antler India, and Vaas Bhaskar of Elevation Capital doling out the key investment criterias in the Web 3 world and advice for startups building in the space

Whether it’s large tech players like Microsoft planning to create realistic workspaces, or Ariana Grande holding a concert on Fortnite, the opportunities presented by interactive, digital worlds seem limitless. According to a report by JP Morgan, the metaverse will likely infiltrate every sector in some way or the other in the coming years, with the market opportunity estimated at over $1 trillion in yearly revenues.

We are witnessing companies of all shapes and sizes entering the metaverse in different ways, including household names such as Walmart, Nike, Gap, PWC, Adidas and others. Business leaders, investors and boardrooms around the world are now asking themselves, ‘What is our Metaverse strategy? How big is the opportunity and how can we grab a piece of that pie?’

We spoke with the top two investors – Nitin Sharma, General Partner and Co-Founder at Antler India, and Vaas Bhaskar from Elevation Capital – in the space to understand what they are looking for in a Web 3.0 startup before putting the money on the table, and more importantly, advice for every founder building in the space.

Be curious in the dynamic space

The beauty of the space is that it's still at its early stage, with niche phenomenons like DeFi, Non-Fungible Tokens (NFTs) rising. However, this exciting space could become challenging for a founder with a closed or a limited vision about his product, as new things pop up almost everyday.

“Everything, including technology and processes, is moving extremely fast. The landscape is changing everyday, and therefore as a founder, you need to get super deep into the space and start thinking of deeper engagements and what else is possible with your product. Be super curious, deep, nimble, and keep building,” says Vaas, who has made five investments in the space last year.

Building for the long term is another important factor that influences an investor, says Nitin. A lot of things fizzle out in every sector, and hence founders with a mindset of sticking to their products and vision for a longer period, even if things don’t work out around, are valuable for an investor.

This long term play also entails community and network building and user engagement, and not just an equity cap table.

“A lot of founders are here for the wrong reasons. Maybe they think it's an easy way to raise money. One might be able to raise money temporarily, but at the end of the day, fundamental value matters. If it's not going to result in a much better user experience or something different in the economics of a business or value chain of some industry, it won’t be able to attract people who are long term believers. This will lead to crazy volatility and wastage of time and talent,” says Nitin.

Having said that, that’s the nature of a “bubble”. There is far more excitement than concerns, adds Nitin.

Quality of the team and knowledge about the space is also important to an investor.

Fundraising in the Web3 ecosystem is a significant cultural shift from Web2. Most Web3 entrepreneurs do not raise funds via equity but token sales. The investor duo here suggests founders to not rush into ‘tokenisation’ and focus on building the utility of the product first. “Too early may not be the right way to go”.

“Mostly, companies start with the hybrid cap table, or they may start with an equity cap table and then go on to a coin table over time. But the dynamics of value creation are so different for both that eventually they'll have to make a choice,” says Nitin.

Majority of the investors salivate around liquidity. They typically invest with 6-10 years of mindset that the business will exhibit liquidity. This drastically changes in a tokenised project, which is able to achieve liquidity in less than two years, and hence one has to learn how to maintain the quality.

A lot of founders in the last few years have struggled as they lose the discipline in sustaining that quality, explains Nitin. Swayed by the ease of creating a token and launching, the hard part comes in maintaining the community and a network.

“It's like a mini IPO. Most founders are not ready to manage some things on a day-to-day basis. One has to be careful because there are too many people who are just speculating on the price of whatever you are creating. This is the reason why good founders sometimes delay the tokenisation before having a good utility in their product. Prove something which has utility and then try to create a network around it,” says Nitin.

There's so much space on the metaverse that you don't need to own anything, says Shailesh Lakhani of Sequoia India

Over the past few months, majority of the founders that  Vaas has interacted with, have been focussed on building a global play and products for the world and not restricted to becoming the best available solution in just the domestic market.

Even for Antler, which comes in at a very early stage as an investor in a startup, gives heavy weightage to ventures having a global vision, starting from day one.

“It doesn't matter if you're the best team in India, what matters is that you can create something which can truly compete at a global level, with of course some exceptions like centralised exchanges. So we definitely take a view that many of these teams will also be decentralised, and that's where perhaps we could also play a very important role as investors,” says Nitin, who has personally invested in about 15 startups.

This becomes even more pertinent as startups transit from Web2 to Web3 where decentralisation takes the centre stage in the latter.

“You are not just investing in a company but a community in Web3. We then look at a founder’s strength of rallying a global community and competing with the best globally. Can they actually have users, developers, advisors, investors in various countries, can they marry the right level of technical depth with the right level of community building and marketing very early in their journey? Things come much earlier in Web3,” he adds.

Few years down the line, almost 20-50 percent of top VC fund allocation is expected to go into the Web3 space. In addition, a significant allocation will start to take place from capital managers and Limited Partners (LPs) towards crypto native funds, which are doing token investments. It would be more sort of “scaled up blue chip investment”, says Vaas.

This is likely to drive a significant amount of capital in the overall space.

Elevation Capital has backed varied startups in the space like NFT platform Hyy.pe, DeFi startup Pillow and so on. This is actually also the first year in which the firm has added Web 3.0 to its investment portfolio. They now have a separate team looking at startups that develop products for Web3. On the other hand, Antler India will invest in 25 -30 startups in the space within the next couple of years and has set aside funds in the range of $100-150 million for over 100 Indian startups, of which $50 million fund is earmarked for Web3 companies.

“I would not be surprised if this year, even with the macro changes going on, maybe a billion dollars of venture funding goes into Web3 from India. In 5-10 years, large platforms will be built out of India as we will move from building services to products to new platforms now,” says Nitin.