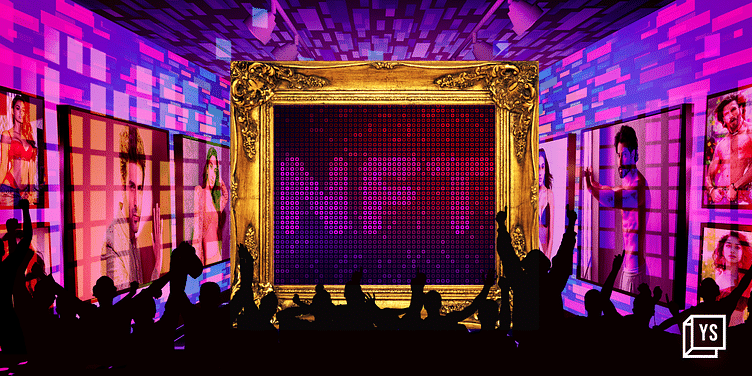 It’s not everyday that you meet three tech founders trying to make a break into the glitz of entertainment.

“Being fans does not give us a rite of passage,” says Ritesh, followed by a hearty laugh. This was in response to how three founders with no background in the entertainment industry decided to set up a fan engagement platform.

It was this love for all things movies that took them to build Fangage Labs. Now, it wants to change the way fans interact with celebrities through its brand ﻿Wow Talkies﻿.

In order to make Wow Talkies work, it was important to move away from what exists.

“Celebrities treat their fans in a cookie cutter mode,” says Ritesh. “However, if we build community engagement with fans on Web3, everybody has a voice because the platform is decentralised. And if the celebrity can be a part of the network effect, then they can treat the fans based on their levels of fandom.”

Simply put, Wow Talkies envisions a more active platform, one that is unlike current ways  of engagement which lean into a broadcast model that often leave fans devoid of personal takeaways or meaningful interactions with celebrities.

This idea for a web3 platform didn’t come right off the bat. It began with an app in early 2020 that offered users  avatars, face filters,  face swappers and sticker packs besides aggregating movie news—primarily for Tamil movie fans.

A couple of years later, it had over 2.8 lakh downloads with users spending 3.5-4 minutes on average on this app. While this format worked, the founders quickly realised its limitations. “Now, with all the Web3 movement, this gap (of engagement between fans and celebrities) can be easily filled. This allows for decentralisation and the fan communities do not have to be driven by the social media platforms’ algorithms,” says Ritesh.

What makes Wow Talkies different is its collectibles. The form of these collectibles won’t be limited to just static images – they can be  face filters, face swaps, downloadable stickers and avatars. For instance, you can use the in-built augmented reality (AR) feature of the app to superimpose the caricature of your favourite celebrity sitting at your office desk and click a picture.

You could also use the artificial intelligence capabilities of this app to swap your face with that of a celebrity and take a selfie. The startup says it is using the latest in generative adversarial networks to build and train deep learning models for these purposes.

Both the web and the mobile platforms, which will be available on both Android and iOS, will be deployed using Polygon blockchain. Currently, it is in beta mode and will be made available by the end of October.

Once live, the startup will begin its activities with a few copyrighted NFTs (in collaboration with production houses and talent agencies) and collectibles made by Wow Talkies. In essence, it is betting on these Non-Fungible Tokens (NFTs) to accrue value.

“Largely, fans are engaging with NFTs in the anticipation that they will grow in value. It's more speculation and investment rather than engagement. When the communities come in, we think this will change over a period of time because the community will want to engage with the collectibles in an espousal kind of manner rather than from a speculation perspective,” says Ritesh.

Those who download the app would get access to about 30 non-copyrighted collectibles upon registering to play around on the platform.

Besides NFTs, Wow Talkies is in talks with a few production houses and agencies to bring talent on its platform. In this regard, it has partnered with Sony Entertainment Talent Ventures India (SETVI), a joint venture between Sony Music Entertainment and Sony Pictures Entertainment.

“We do believe that creators and artists and talent would want to extend their art to the younger audience, which are not necessarily consuming any kind of entertainment or digital assets in the traditional form. They're looking at new formats. And that's where somebody like Wow Talkies comes into play,” says Namrata Singh, Head - Metaverse and Digital, SETVI.

Through this partnership, SETVI would bring in talent while Wow Talkies would enable talent augmentation through its tech offering like the Web3 platform and AI/AR capabilities to create NFTs.

Without revealing too much about the talent they are going to bring on board under the partnership with Wow Talkies, Namrata said that they have two options: work with non-A-listers till there is better clarity about the legality of this space and work with global talent.

Companies would have to play on newer business models and platforms be it marketplaces for Web3 assets or fan engagement models using AI because the consumer bases are there. “So from that perspective, it made perfect sense to work with them (Wow Talkies),” she adds.

The talent management company, which recently signed its first virtual talent Polar, a virtual music singer created by The Soul Publishing, says it would work with Wow Talkies to create a fan universe and a Web 3 strategy for the digital artist.

Wow Talkies is also looking to bring celebrities, film actors, popular Youtubers and Tiktok stars and influencers on board either directly or through partnerships with production houses and talent agencies.

Entertainment is a hot category for NFTs

There are a few other startups both in India and globally that operate in a similar space. However, Fangage Labs is looking to focus on the utility of these collectibles and especially on the network effects of the communities it hopes to create.

A number of companies in the cross section of entertainment and Web3 have sprung up in India, like Chennai-based Diginoor which says it is India’s first and largest entertainment NFT marketplace and claims to have tie-ups with every major production house in the country.

Oracle Movies, another company based in Chennai, says it is the country’s first NFT movie marketplace. It allows users to buy and sell movie rights using the blockchain technology. A couple of months ago, SquirrelVerse, a metaverse solutions provider, announced the launch of a curated NFT commerce platform through which it sold a collection of 26 NFTs as tickets to watch movies in Metaverse.

FanTiger is a music NFT marketplace creating a decentralised community for artists and their fans while BeyondLife claims to be India’s first curated talent and athlete NFT exchange.

In a few quarters, Wow Talkies wants to introduce gamification based on the traction it gains from its users. Based on the number and kind of NFTs purchased and activities done by the users, they would get assigned points, which would help them move up the ladder with appropriate rewards.

For instance, depending on the nature of agreement with a certain celebrity, a “superfan” (somebody who has perhaps reached the highest fandom level) may stand a chance to interact with their favourite star.

“We did a few focus group discussions around this to understand what fans/users think of our offerings and we received some good feedback. Even on the supply side, when we showed our technology to talent management and production houses, they seemed very excited about it. When you get these cues both from the demand and supply sides, you get some motivation to keep plugging away,” says Saravana.

Wow Talkies hopes to earn revenues right from Day 1 of their launch. It expects to earn 30-40% of the total deal value in partnership with production houses. As for celebrity collaborations, it is looking to get about 40%-60% of the total contract size and hopes to get 10% of its revenue from the reselling  of celebrity NFTs.

In all, Ritesh says Wow Talkies’ business projections suggest that the startup is likely to earn Rs 7-8 crore (around $1 million) in a year from its launch.

The startup, which raised $100,000 in seed capital from a group of angel investors led by Milapsinh Jadeja, Founding Director of Iroller Private Capital Limited. It is expecting to close its second tranche of seed investment sometime soon.