'Have a winning attitude and believe in yourself’: Chef Julia Carmen Desa’s advice on International Women’s Day 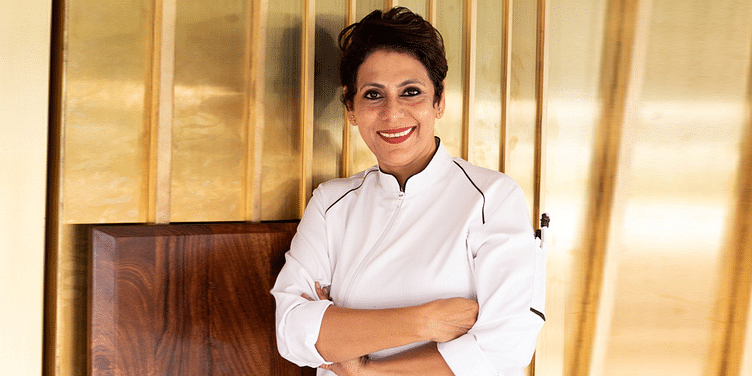 Being a woman in a predominantly man’s world is not easy, but it is not impossible either. As International Women’s Day draws closer, Chef Julia Carmen Desa, Chef and Co-owner, TRES, offers some tips to women on how to stay strong and get ahead

With over 30 years of experience in the food and hospitality industry and as a food and beverage service professional, Chef Julia Carmen Desa, Co-Founder, TRES, has hands-on experience in cuisines like Coastal, Indian, European, Mid-Eastern and South-East Asian and holds many accolades to her name.

Julia started her career with Taj Holiday Village, Goa and went on to work at The Hilton’s in Abu Dhabi and later to Singapore before returning to the Taj Group in India for a long stint. After having worked with some of the finest chains like Taj, Hilton, DLF, and co-run her own standalone restaurants in Europe, Singapore, and the Middle East, she’s now the Chef and Co-owner of a bespoke dining space known for dishing out inventive Global Contemporary flavours - TRES - in the up-market Lodhi Colony in Delhi.

In an interview with YSWeekender, Chef Julia speaks about her culinary journey and also offers some tips to women on International Women’s Day on how to succeed in life.

YSWeekender: What were some of the challenges you faced as a woman chef?

Julia Carmen Desa: I've never thought of myself as a ‘woman’ chef, rather just as a chef, who also happens to be a woman. On International Women's Day, I would like to remind women, that the challenges are the same with people of both genders. Being a woman has given me a skill-set that has its perceived strengths and drawbacks — but this shouldn’t be considered any different from what a man brings to the kitchen.

YSW: What does it take to survive in a man's world?

JCD: We live in a man’s world. While this is difficult to accept, it is a stone-cold fact that puts women at a large disadvantage, especially when it comes to on-ground jobs and businesses which are traditionally perceived as suited for men. Even though a lot of women have successfully made space for themselves in every industry, there are still a lot of obstacles they have to go through. They have to fight against deep-rooted gender bias and stereotypes, play multiple roles and a lot more.

I’ve worked with some of the best chefs in the world who made it a point to make me feel welcome in the kitchen. I have always been strong headed and stood by my principles. And maybe that also saved me from being in any bad situation.

However, I am acutely aware of the fact that other women are not as fortunate as I am. In my journey of 30 years, I have come across women a lot of women who had to face hardships in making space for themselves in the industry.  My advice to all women out there on International Women's Day, is to be determined and strong headed. It’s a long way to go! Do not give up. Each hardship will make you stronger. Have a clear winning attitude and believe in yourself. You are your biggest supporter.

YSW: Can you give us some anecdotes on how you succeeded despite difficulties?

JCD: Every path has its difficulties; it is only your approach that makes the difference. My idea of success has always been to excel in everything I do. My work appreciation and accolades did raise a few eyebrows but not paying attention to them was my choice. I stood determined and moved forward.

My superior once told me, “it is not just about the good food you cook but how you cook well in a team. I did take up a few leadership and interpersonal skill workshops which allowed me to improve and work more cohesively.

I have won TBM, one of Taj biggest awards 4 times in a row but it was because I deserved it, regardless of my gender.

YSW: How did you decide to become a chef?

JCD: Honestly, I never planned to become a chef, it happened totally by fluke. I grew up in a beautiful Goan household where a lot of our thoughts and conversations were about food, and the anticipation of our next meal! But did I want to become a chef? No, I wanted to pursue every other career but be a chef. When I asked my Dad for a break to figure what I wanted to do, he refused and got me admitted in a hospitality college in Goa.

My first year was utter disaster, I tried and I tried, but nothing worked. But as destiny had it, there was this one cooking assignment which caught my teacher’s eye. She noticed the potential (the crisp and balanced flavours and the plating of my dish), and she singled me out, mentored me and made sure that I did everything to perfection. She saw in me what I didn’t see in myself. And since then there has been no looking back.

Food became my passion and that made me create new recipes very often. The appreciation I received inspired me to look for opportunities in this field.

JCD: Hurdles arise when someone has to make space for themselves and battle against gender biases, stereotypes and industry politics. In my case, I was fortunate enough to never face any of these. I never experienced any sort of discrimination. There is no denying that I have been a strong woman from the start and the comfort I received from my colleagues, counterparts and mentors only made it easier and a smooth journey overall.

YSW: How did you grow in your career and move forward?

JCD: Just like any other profession, I moved ahead in culinary space with hard-work and perseverance. I feel having a clear vision helped me a lot. I always knew what I wanted and that gave me the right direction to move in. I was never afraid to be different, rather that was my motto. Till date, I try to innovate, to keep up with the new trends and changes.

I believe that women should never settle. My top advice to women on International Women's Day is that they should keep innovating, adapting to changes and putting their best self forward.

YSW: What advice would you give women who want to get ahead in a male-dominated profession on Women's Day?

JCD: Today, we have women excelling in every field, despite of all the odds stacked against them. Their instinct to face insurmountable challenges has made them who they are – successful and a force to be reckoned with.

So, my advice to all women on International Women's Day, who want to get ahead is to have faith and believe in themselves and their skill sets.

Do not fear failure. Have a clear vision of where you want to be and work hard for it without any excuses. Women find themselves pulled in multiple directions, playing multiple roles so it is important to have an understanding of how to strike balance. There should not be any excuses but willingness to achieve your goal.

YSW: What advice can you give Indian cooks or those who love cooking?

JCD: Learn the basics right. Innovation and creativity hold utmost importance but the final result has to be palatable. It needs to be delicious. It’s something that in today’s day and age is overlooked a lot. Ultimately the food needs to taste good even if you are experimenting with new ingredients.

Also, it is important to have an understanding of the science behind cooking; from the flavour of sauces to picking the right ingredients and incorporating fresh produce. Success is guaranteed if your foundation is strong and your basics are in place; skills can be honed, but knowledge is necessary.

YSW: Can you tell us what were some of the defining moments in your culinary career and the top favorite things you like to cook?

JCD: A milestone moment of my life was when I managed to cook breakfast, lunch and dinner for 800 people At Taj Exotica at very short notice and yet, everyone loved the food. It was an emergency situation and worked as a team, and not only took care of the entire service but also the ongoing operations related to the guests. Leadership and team skills played a very important role in dealing with the situation.

I love experimenting with vegetables. I get really excited when I have to cook a vegetarian dish because of the innumerable ways and techniques I can incorporate. My other personal favorite food that I love to cook is seafood.

YSW: How is the life of women chefs changing from when you started your career?

JCD: I started somewhere 25 years ago and since then there have been drastic changes in the industry. Today women chefs are more focused and they prioritise their life very well. They are very clear of their goals and know how to play to their strengths.

When I started there were very few women chefs in the industry. Today so many women are coming forward and turning their dreams into reality with a clear vision. But patience is key and perseverance is a must. Rome was not built in a day; similarly, one must invest in learning each day.

YSW: What are your plans for the future?

JCD: I am somebody who lives by ‘One day at a time’. I don’t worry about the future at all. I live in the present. The future is completely uncertain, so I don’t find any point in planning things and making far sighted plans.

As long as it is concerned where I see myself in coming years, the answer would be ‘my kitchen’. I love what I do and I plan to do it for the years to come.

I am not a quote person but there is this one quote which is synonym to my attitude towards life - “Don’t worry about future, tomorrow will take care of itself. Live in present and make it worth it’