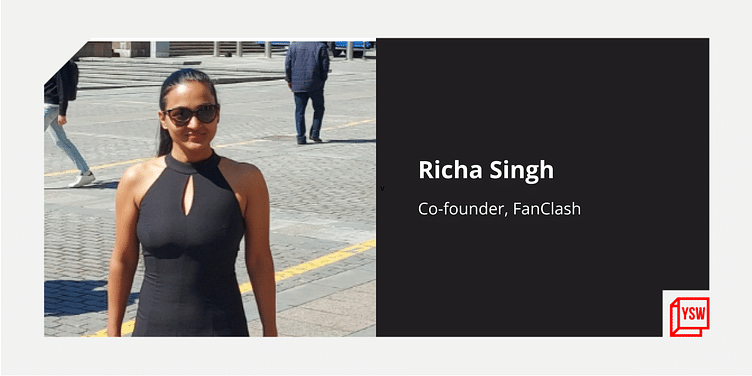 FanClash is a fantasy league platform for eSport tournaments and has witnessed phenomenal growth in the number of users and prizes distributed since its launch last year.

In an increasingly digitised world, eSport players are akin to regular sport players – they garner the same adulation from their fans, display the same team camaraderie, and their wins and losses are bet on in a similar manner.

The ﻿FanClash﻿ platform addresses all these needs of eSport gaming by providing a platform for players to compete, access curated content, and participate in daily fantasy leagues on popular eSports from across the globe.

Founded by Richa Singh and Rishabh Bhansali in 2020, the eSports startup, with offices in Gurugram and Bengaluru, officially launched the product in February 2021.

In its short journey, it has been endorsed by several gaming influencers such as 2-Sided Gamer and Total Gaming, among others.

“From fantasy leagues and tournaments to the latest happenings in the gaming world, FanClash is involved in every step of gamers’ eSport fandom journey. We are committed to revolutionising the eSport fantasy world by providing thrilling, fair, and accessible gameplay. We employ the latest technology and have the right data driven mindset to build products for eSport enthusiasts of all levels,” says Richa in a chat with YS Weekender.

Richa is an alumnus of IIT Kharagpur and IIM Ahmedabad. Rishabh studied at Shri Ram College of Commerce in Delhi University and IIM Ahmedabad. They launched FanClash in the summer of 2020 with the vision of becoming the ultimate data and fantasy hub for gamers across India and the world.

The founders highlight that currently, there are over 3.5 billion people involved in gaming in varying degrees, and they wanted FanClash to be a one-stop-shop catering to this large segment.

eSport is the name given to the world of competitive, organised video gaming, where at-home gamers compete against each other in video games. The most popular gamers, just as with regular sporting icons, build their own fandom through their success rate.

“This is different from standard video gaming in that eSport is competitive and usually has an engaging spectator element to it like in traditional sports. eSport tournaments usually consist of amateur or professional gamers competing against one another for a cash prize. Pro gamers who play at this level know the games inside out, much like a professional footballer or athlete would in their respective fields. Professional teams have their own coaches, analysts and managers who help to get the most out of the players and organise strategies,” says Richa.

With the rising popularity of eSport, fantasy leagues were the logical next step. For this, players select a virtual team from a pool of potential real life players and compete against other peoples’ team picks. Based on the real life performance of the selected players, the chosen team earns points, and the winner is picked on the basis of the highest number of points.

“Given the significant overlap between gamers and Web3.0 natives, FanClash’s approach to serving this community is through Web 3.0. Towards this end, we are also launching the largest assortment of eSport NFTs and collectibles featuring players, teams and eSporting moments. We also co-sponsored the AxieUtsav organised by MetaMisfits, in collaboration with Polygon Studios, which was the first Indian official blockchain-based eSport event and workshop for artists, gamers and developers in Kolkata on December 25, 2021,” shares Richa.

The FanClash platform is easy to use. One needs to make their own account on the website fanclash.in or by downloading the app. They will join a million active users, who have clocked in winnings of over Rs 52 lakh since the launch of FanClash.

Players select the tournament or match they want to participate in – these can range from a variety of free or paid contests. Then players are encouraged to use their eSport knowledge and check player stats on the platform to create a fantasy team through the credits given to them.

So far, the FanClash team has organised over 2,700 fantasy matches and more than 30,000 contests, for which the prize money has totalled over Rs 44 lakh.

“We have absolutely no other competitor. There is no other startup focused on creating data or actionable data or one that offers the kind of features we have for eSport followers,” shares Richa.

This year, the 50-member strong team has a couple of exciting moves planned. A global fantasy league on the Asian Games 2022 is in the works. The Asian Games are going to feature the top eight eSports as medal events and FanClash will bring the global community together to play fantasy leagues on these.

Richa also highlights FanClash’s move towards the ‘Meta’ world to serve the fans of eSport in Web3.0, by offering fantasy league play for a global play-to-earn population. Their partnership with MetaMisfits and Polygon Studios is in line with this policy.

She says, “FanClash is pleased to be a part of this venture. The firm holds immense faith in the promise of play-to-earn games, as well as the power of blockchain and NFTs in the Indian market and seeks to support its implementation as much as it can.”

According to an article published on esport.net, the global market for eSports fantasy gaming was over the $20 billion mark in 2020. As India and Asia’s only player in this domain, FanClash is set to cash in on the rewards.

They began with an initial investment of $10 million collected from leading venture capitalists of the country. In just a year, the company has over a million fantasy users signed on to play. Richa says,

“The growth FanClash has witnessed since the launch of the product in February 2021 has been nothing short of astounding. We could not be more proud of our team!”

The biggest challenges for the team at FanClash have been skirting issues that crop up in a new and previously uncharted industry. As a new industry player defining their own role, they had to conduct several manual data collections, among other preliminary steps. Another challenge was putting a team together that fit their business requirements while also being familiar with the eSport domain.

“Every time we disburse the salaries of our employees, we cherish the moment. The ability to create jobs in a satisfying workplace is extremely rewarding. Further, we are the first movers of this concept – fantasy league in eSports – in the whole of Asia and are very proud of having this vision quite early on in 2020, while the industry was still at a very nascent stage. Most of all, we are proud that we were able to give life to that early vision so quickly,” says Richa.