Inspiration comes only once in a blue moon, so work at your art, says ace rapper Siri Narayan 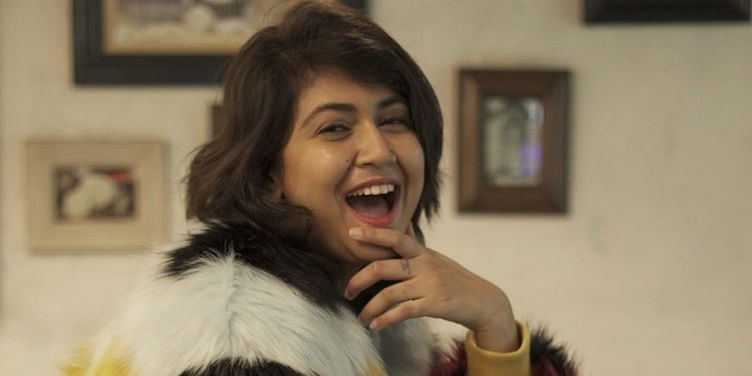 Siri Narayan is known for her infectious energy and her multi-lingual singles. In an interaction with YSWeekender, she speaks about her love for rap and her journey so far.

Fans of rapper Siri Narayan may love the way she lit up the hip-hop scene in the country with her vivacious moves and for rapping in multiple languages, but they might not know that this Bengaluru-based artiste has learnt Carnatic music and can play the veena too. She is one of the few female rappers in the country who raps in Kannada, Telugu, English, and Hindi.

Whether it was her track My Jam or her singles like ‘Gold’, ‘Live It’ or ‘Tu Bas Naach’, she has increased her fan base exponentially with her skilful use of language and the mastery of her medium.

Siri started off by performing at college events and her first rap performance still remains the closest to her heart as it drove her to create more music.

Her collaborative track with Girliyapa, one of India’s leading women-centric entertainment channels, garnered millions of views and won her the Best Electronica Artist and Best Indie Collaboration awards at the Radio City Freedom Awards 2019. Following a brief stint as part of hip-hop label Azadi Records’ roster (which ended in early 2019), Siri found a reliable collaborator in New Delhi producer Sez On The Beat aka Sajeel Kapoor.

Her latest track ‘My Jam’ premiered in May 2020 and racked up lakhs of views on YouTube. Produced by Sez On The Beat, the track has Siri rapping in English and Kannada.

The artiste discovered rapping while studying at the National Institute of Fashion Technology, Hyderabad. Her track, My Jam, produced by Sez on the Beat, was nominated for ‘Best India Act’ at the Europe Music Awards 2020 and though the team did not win, they earned greater acclaim with every experience.

The Europe Music Awards 2020 was streamed LIVE in the country on Voot Select and aired on Vh1 India.

In an interaction with Siri, she talks about the challenges of being a woman rapper and her plans for the future.

YSWeekender (YSW): Can you tell us how you felt about being nominated for the Europe Music Awards recently?

Siri Narayan (SN): I feel blessed. Vh1 and Artist Originals really put us on the map after hearing My Jam. I worked really hard on this project, which included creating the lyrics, ideation, composition, direction, co-production and post-production of the video. I think multitasking makes me stand out. I was extremely blessed to have Sez On The Beat on this project as he is always bringing his A-game to the table.

YSW: Were you always interested in music as a child? Can you tell us about your growing up years and studies?

SN: I was always inclined towards music. My mum made me learn the veena and take Carnatic vocal classes as a kid. In fact, I didn’t even listen to rap until 2013.

I was more into fine arts in school and loved getting my hands messy with paint. I even studied design in college. I guess those skills have helped me do my own artwork and other creative requirements with respect to my music.

YSW: How did you get into rapping? When did you decide to take it up as a career?

SN: I heard this song called ‘Outta My Mind’ by B.O.B Nicki Minaj. I was obsessed with that track and I started rapping that number and eventually I performed the track in my college. The response was incredible so I decided to write my own lyrics.

It was only three to four years ago that I decided to take up rapping as a career.

YSW: What did your family think of your foray into rap?

SN: My parents were pretty clueless (my mom still is) because they don’t get the music I do. Now, they seem to be more supportive than before. It takes some convincing for some Indian parents to understand initially but now, my dad has even attended some of my gigs.

YSW: What were some of your challenges as one of the few women rappers in the industry in India?

SN: The challenges are the same as in any industry, which is populated mostly by men. Here, the audience is also mostly male, so I believe people don’t give you the same support that they show the men. But I guess I’m here to change that. Sexism is the same everywhere so I like to talk more about what I do and how I do things than my challenges because honestly, it’s tiring. I should probably save that for my songs as content.

YSW: You're a multilingual rapper. How do you choose the appropriate language for each section of a song?

SN: I actually don’t plan any of it, it comes naturally. If I feel like my Kannada verse sounds good in the beginning, I put it there and it’s the same for English or Hindi too. Each time I try new arrangements because I like experimenting too.

YSW: Where do you get your inspiration for your music?

SN: Inspiration only comes once in a blue moon, so I think creating or making art should become more of a habit. I’m still getting there though. I’ve only been creating when I’m in the zone, but now I am trying to make it more of a habit.

YSW: What are some of your major performances?

SN: My initial performances were very special to me, as I was just starting out. I used to perform impromptu at this club near my college sometimes when I went partying with my friends. Later, I did this memorable performance at Gilly’s Redefined in Bengaluru, which was one of my bigger gigs. It was also the first time my dad came to watch my performance.

My GQ performance was also special, because the crowd was mostly Bollywood and fashion celebrities, and it was different performing for them than the usual crazy audience!

My stage performances were great too; I loved Rider Mania, VH1 Supersonic, and Echoes of Earth. I think I had a fantastic time both on and off stage.

YSW: Why do women not get into rapping too much?

SN: I think it is because it’s one of those things that aren’t directly marketed to women, mainly due to the fact that it is male-dominated. But things are changing, I see so many new female rappers every day now.

YSW: What kind of skill is required to be a good rapper?

SN: I would say you need authenticity, delivery, flow, challenging content, and patience.

YSW: What do you think is the future of rap in Indian music landscape? Who are your icons?

SN: Rap is growing really fast and our contribution builds things for the future too. I love Nicki Minaj, Missy Elliot, A Tribe called Quest, to name a few. They are all so iconic.

YSW: How do we differ from our western counterpart when it comes to music?

SN: We are so culturally rich due to the languages we speak. But we still have a long way to catch up business-wise in the indie music front.

YSW: What are your plans for the future, both professionally and personally?

SN: I will be putting out more singles so my plan is very simple. I have two upcoming singles in the works. Both have been produced by Sez On The Beat! Since I tend to become a workaholic, I’m trying to develop habits and routines to help me achieve my goals. This is one of the toughest things I have done in my life.

YSW: What advice would you give those who want to get into the music industry and rapping in specific?

SN: My advice would be - don’t listen to advice because you know what is best for you. The internet will tell you if you suck or you’re good at rapping, so that’s that! But always have a few go-to people and mentors who you trust for advice. And make mistakes and fail hard, it’s not a bad thing!

This startup is bringing Indian mythological stories to smartphone users

Beauty and the best: How Dr Bharti Taneja embraced beauty with her venture Alps Beauty Clinic and Academy