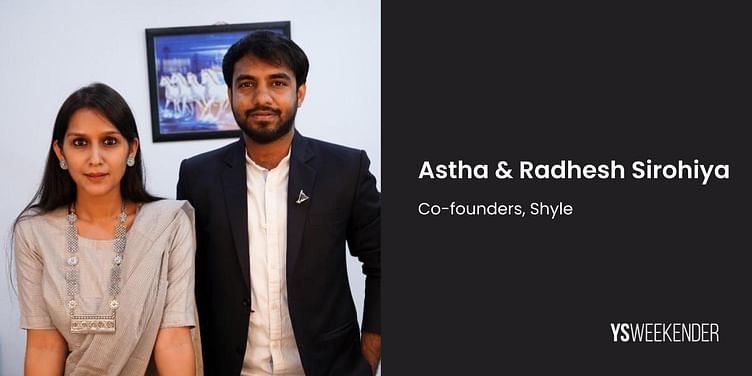 Jaipur-based digital-focused brand Shyle offers silver jewellery in a variety of contemporary and traditional designs that have been spotted on the likes of Madhuri Dixit Nene, Shraddha Kapoor, and Gauhar Khan.

“When everyone else goes gold, go silver!”

In today’s times, Indians seem to have taken this to heart, with enterprising millennials working to modernise this precious metal to meet modern needs.

Since launch in 2017, the digital-focused brand has been sported by the likes of Madhuri Dixit Nene, Shraddha Kapoor, Shweta Tripathi Sharma, and actress Gauhar Khan in the series Kaali Peeli Tales among others. Shyle has also amassed over 200k followers on Instagram, and is growing this number steadily.

“Each product is designed and manufactured in house. We personally oversee the production of every single design through the process of ideation, sampling, repeated sampling, finalising, and launching. Our products are handcrafted and not machine-made. Through our unique designs, we hope to ensure that people see the product anywhere across the globe and recognise it as Brand Shyle!” say the founders in a candid chat with YS Weekender.

The brand was launched in Jaipur in October 2017 at an exhibition, and since then has largely showcased its products on its Instagram account @shylebyastha and website to reach a wide clientele.

Astha, Creative Head of the brand, pursued her MBA from Nirma University in 2015, and moved to Gurgaon after her engagement to Radhesh. She worked at a real estate startup, but a 9-to-5 job was not her cup of tea. She decided to test her creativity by launching a small collection of pure silver jewellery, and immediately knew this was what she was “meant to pursue”.

“I would style myself up and shoot early in the morning as Radhesh would photograph me before leaving for office. I made sure that my Instagram content showed our collection in the best possible way despite our limited resources. I travelled frequently to Jaipur to understand the market, work on the designs, and connect with the karigars,” she shares.

Soon, Radhesh quit his job and joined her as Growth and Operations Head, and the team returned to Jaipur. Astha has been the face of Shyle since the beginning, as she believes it establishes a “connect with the audience”.

Radhesh graduated from IIT Roorkee, and worked at Reliance, Flipkart, and Crownit before moving to Shyle full time.

“Everything I learnt at Flipkart became the foundation for my entrepreneurial journey. From there, I was involved in a couple of successful startups  before making Shyle my focus. What started as a team of two has since grown to a team of 30,” he says.

Priding themselves on becoming one of the leading silver jewellery brands in the country in the short span of four years since their launch, the co-founders highlight certain aspects that set them apart from others in the market.

The products at Shyle are made with pure 92.5 silver, and are free of nickel and cadmium. Their unique designs, an example of which is the Retro Ketli Chai Ring, have become trendsetters in their own right. This intricately carved ring comes with a lid and handle to signify tea being poured in a cup.

Astha says, “This was a landmark launch for Shyle and our overall top line shot up by 250 percent within two months of the launch of this ring. This was also the time when our designs started getting copied blatantly, including our copyrighted photos and it took immense effort to control this.”

Other unique designs from the collection include the Mizoya telephone ear cuff, the Qurbat uncaged bird ear cuff, and the Anvaya horse rath statement jhumkas, among others. “We try to create designs that connect with our audience emotionally, and this allows us to strike a chord with them,” Radhesh explains.

The focus on conceptual photography to bring out the best of the product has also been a major catalyst for their social media growth, which they attribute to the brand’s overall growth as well.

When asked about the competition, they name the likes of Tribe by Amrapali and Shaya by Caratlane. While the former is sold at a higher price point, the latter focusses more on a western aesthetic as opposed to Shyle’s wider range.

According to the Gem and Jewellery Export Promotion Council, the demand for silver jewellery more than doubled in FY20, which explains the rapid expansion of Shyle, particularly in the overseas market.

A bootstrapped company, Shyle began with an initial investment of Rs 5 lakhs. It hit break-even within three months of launch and has continued to grow steadily since then.

The pandemic was a difficult period as they witnessed an 80 percent dip in revenues during the lockdowns. This was mostly due to operational delays, a halt in production, and a lack of new orders. However, this gave them the time to improve their website, ideate on designs, and learn the principles of effective digital marketing.

Fortunately, once things opened up, they witnessed a growth of more than 200 percent.

“After the pandemic, silver jewellery has seen an unprecedented growth and mass acceptability among working class and women of a higher age group too. Its affordability and premium quality are very attractive. Moreover, with lockdowns and restrictions, people who were hesitant to shop online for precious metals opened up to using ecommerce platforms,” Astha says.

The majority of Shyle’s clientele is Indian, but they have a significant overseas audience spread across the US, Australia, Singapore, the UK, Canada, and the UAE. Talks are on to set up a dispatch office in the US to enable two-day delivery across the country.

Finding the right karigars and controlling the copying of their designs and photos have been their biggest challenges so far. However, they have had many rewarding moments as well.

Analysing their journey so far, Radhesh shares that the increase in the number of working women in Tier I cities led to a shift in preference, with e-tailers being better placed for success than offline shops. He also believes rapid advancement in technology would soon allow brands to offer in-store experiences while shopping online, thus bridging the gap between online and offline modes.

How Jaypore's Co-Founder, Shilpa Sharma’s love for painting and all things beautiful led her down the path of fruitful entrepreneurship