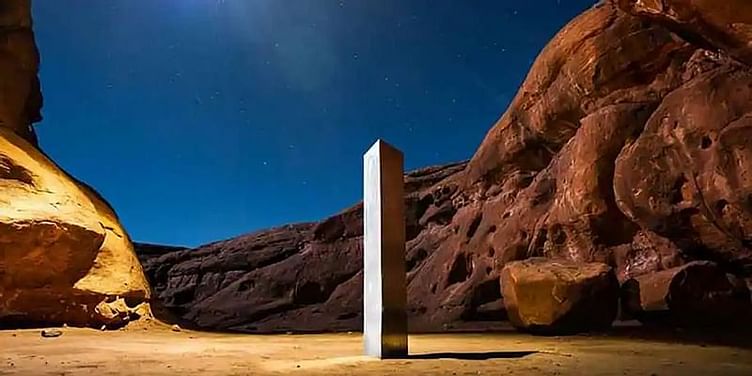 A mystery has taken over the internet about the two uncannily similar monoliths found in Romania and Utah. We bring you a series of events about what really happened.

A mystery has taken over the internet about the uncannily similar monoliths found in Romania, and Utah and California in the US. A monolith is a large single standing block of stone or metal often used in ancient times by the people to mark the territory. We bring you a series of events that took place and what really happened.

Last month, reports circulated that Utah state employees in the US spotted a nearly 12-foot-high metal monolith in the middle of a remote area of federal lands, and they have no idea what world it came from. It was firmly bolted into the canyon’s rocky floor, which seems like a work of an artist (or maybe someone from another world?) as put out by some people on social media.

The strange metal object was first spotted on November 18 by a helicopter crew counting bighorn sheep from the air, in a remote south-eastern area of Utah. Upon investigation, Utah Department for Public Safety came out with an official statement and said that it seemed like an art installation by a “new wave artist” or a prank by a “2001: Space Odyssey fan”.

The reference goes back to the 1968 science fiction film by Stanley Kubrick, co-written by Arthur C Clarke, in which a massive black monolith of extra-terrestrial origin appears among a tribe of hominids and influences the course of human evolution. The discovery of the 12ft (3.7m) high structure sparked curiosity across the world, with people guessing about how the ‘monolith’  got there, and dozens of people paying it a visit.

Interestingly, the monolith mysteriously disappeared shortly after. Ryan Bacher, a Utah helicopter pilot who visited the site told Utah’s TV media that the monolith was gone the very next day. The state's Bureau of Land Management (BLM) also clarified in a statement that it had not removed "the structure which is considered private property".

BLM said that, “we have received credible reports that the illegally installed structure, referred to as the “monolith” has been removed from Bureau of Land Management (BLM) public lands by an unknown party. The BLM did not remove the structure which is considered private property. We do not investigate crimes involving private property which are handled by the local sheriff’s office. The structure has received international and national attention and we received reports that a person or group removed it on the evening of Nov 27.”

A monolith was also spotted at Pine Mountain in Atascadero, California just a few days after it disappeared from Utah and Romania. It was visited by a few hikers who found that the structure was a couple of feet shorter than the one spotted in Utah.

So the #Monolith first appeared in #Utah and then disappeared yesterday. Then seemingly instantly appeared on the other side of the globe in less than 24 hours in #Romania ?!?!? pic.twitter.com/MrgG3La5vE

As yet, no one has claimed responsibility for installing the structure, however the officials and experts say that both the structures are work of unknown artists which are inspired by the sci-fi movie 2001: A Space Odyssey.