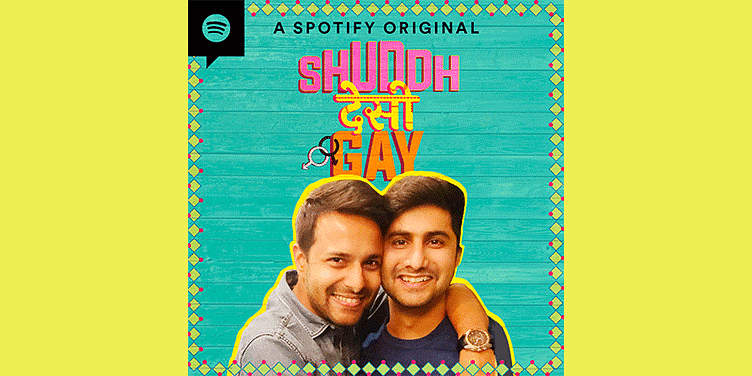 Spotify India original podcast Shuddh Desi Gay, hosted by Yogi and Kabeer, provides a glimpse of what it means to be a gay couple in India.

India might have progressed in many ways, but the narrative of same sex love and marriage is relatively new in the country, although it has existed for many centuries now.

So what does it mean to be a gay in India? Spotify India’s recent podcast Shuddh Desi Gay aims to answer just that. Hosted by gay couple and former RJs, Yogi and Kabeer, the podcast gives a glimpse of what it means to be a homosexual in India, their struggles, and what their regular lives look like. The podcast also covers topics ranging from monogamy, polyamory, and love, to pop-culture and social affairs.

In the podcast, Yogi and Kabeer speak about their own personal experiences and the challenges they faced for being two men, in love with each other. The episodes deal with challenges including coming out of the closet and fitting in, among others.

In order to target the non-English speaking India, Yogi and Kabeer have intentionally used Hinglish (a mix of Hindi and English) to narrate their story of love.

Recently, YS Weekender caught up with Yogi and Kabeer to delve a little deeper into their lives, and what led them to start Shuddh Desi Gay.

Edited excerpts from the interaction:

YourStory Weekender (YSW): Why do you think it is so important to tell your personal story?

Yogi and Kabeer (Y and K): In all honesty, we didn’t really see this as important when we started. Our starting point was just the fact that we are two people in love who have an interesting story, and at the same time wanting to share the narrative landscape of love stories (Yeh ek desi story humari bhi hai).

But the real importance hit us after we rolled out a couple of episodes. Having received a barrage of messages from people saying how brave it is of us, or how great they feel to finally have a reference point from a desi point of view. So, here we are sitting and wondering how amazingly counter-productive this has been.

As far as the importance of personal stories goes, it is as personal as it can get for us, and from a listener’s standpoint, what they get is highly relatable, authentic, non-western story of our desi lives as individuals, as well as a couple. Not just with our story, we think personal stories in general cut across so many levels to connect with the listeners with their authenticity, and their raw yet endearing charm.

YSW: Is the Bharat of India as adaptive to podcasts as much as they are to the video form of content?

Y and K: Podcasts are such a new concept, and you have to make that audience. People connect with podcasts as online radio. Having said that, I feel once the content is out there, it will automatically make it to Bharat.

In terms of adaptability, I think we have to give a little more credit to our country and that is the benefit of doubt that we would like to give to our listeners.

YSW: As storytellers, what are the few challenges you faced while working on this podcast?

Y and K: Both of us come from the audio media industry, and having worked in radio for years, even as radio jockeys helped us transition into podcasting naturally. In fact, it was liberating to some extent, because there were so many things we couldn’t talk about on the radio, that we now can and are already discussing.

The only challenge we feel is that no matter how personal our podcast is, it still is a professional work.

The blurring of the personal space with the professional space requires a fine balance, and we are trying to strike that. But that being said, we also feel that it is also one thing that makes our podcast listener experience great, because they just don’t hear two professionals talking but a couple in love too!

YSW: Please share any interesting incidents of people reaching out to you after listening to your podcast?

Y and K: Having been RJs in the past, we have received our fair share of listeners’ messages, but this has opened up a whole new avenue to that.

We literally have poured our hearts out in our podcast - about our lives, about our likes, dislikes, and everything, and having done that only to see it being reciprocated in the messages is a great feeling. Not just as a high validation booster but also makes the effort so worth it.

From the many messages, the one that really moved us was the person who said that he heard the podcast and had a big smile on his face and tears in his eyes. He said it was for the first time he could hear a story that he could relate to and that it was the first time that he heard hinglish mein baat chit that normalised same sex individuals and couples that are largely invisible and highly under represented. He also mentioned that he would make his family listen to it to help them better understand the normalcy of LGBTQ+ people and their relationships.

Then there was one that said he loved our podcast because it gave him hope. Now that’s a huge responsibility!

YSW: What are your next plans? How do you plan to keep the conversation going?

Y and K: The only plans for now is to continue on the path of making this the most authentic love and life story podcast of two guys who happen to be in love with each other.

The plan is to continue the dialogue of our lives, but also involving our listeners to plan our conversations further. We make the show more interactive by also discussing what our listeners want to discuss since the channel has already opened through our email, Instagram, and Twitter.