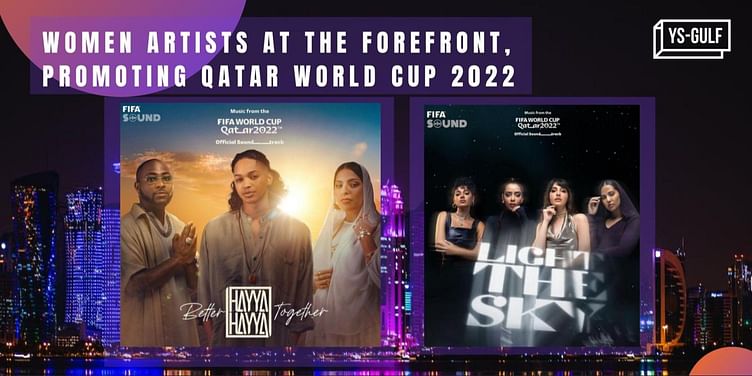 FIFA World Cup’s official soundtrack is a multi-song collection featuring collaborations of local and international artists from diverse musical genres. Women artists have a prominent presence in the collection.

The first FIFA World Cup to be hosted in the Middle East is right around the corner. Set to be held in Qatar, the mega event will witness prestigious football players from across the globe compete for the renowned cup. The countdown has begun, and the World Cup is starting on November 20, 2022 and will continue till December 18, 2022.

Music has always been the core of any sporting event, and the FIFA World Cup is no different.

But there is something different this time. According to the organisers, this is the first time a complete FIFA World Cup official soundtrack has been released.

This means there’s more than just one official song—there is a multi-song collection in store! The collection features collaboration of local and international artists from diverse musical genres.

According to Qatar FIFA World Cup’s official website, “By bringing all these voices together, this collection symbolises how music and football can unite the world.”

On Friday, the Official FIFA Fan Festival anthem was also released. Yet another catchy addition to the list of songs released ahead of the event, the song promotes the idea of inclusivity.

Women artists have a prominent presence in two out of the three released soundtracks, as listed on the official website.

Hayya Hayya (Better Together) by Trinidad Cardona, Davido, and Aisha

The first song that was released on April 1, 2022, ‘Hayya Hayya’ (Better Together) is all about celebration. It was released by Def Jam Recordings and produced by RedOne, a Dubai-based, Moroccan Swedish producer.

Among the trio, Aisha is the only Qatari singer. One of the most popular singers from Qatar, Aisha has made appearances at the United Nations General Assembly in New York and at the grand opening of Doha Festival City, among others.

In her statement to Al Jazeera, she highlighted how she felt she had a mission. “It’s not an easy one, although I’m getting a lot of support. I'm still doing something that's different, I’m still opening a new door but just being that initiator for other women, it makes it worth it.”

As per media reports from the region, FIFA Chief Commercial Officer Kay Madati said, “By bringing together voices from the Americas, Africa and the Middle East, this song symbolises how music–and football–can unite the world.”

A groovy soundtrack, Hayya Hayya has been globally viewed around 32 million times on YouTube so far.

Light The Sky by Rahma, Balqees, Nora and Manal

‘Light The Sky’ is a collaborative effort of four of the most well-known female artists of the Arab world.

The music video of the song pays tribute to Qatar World Cup’s female referees who are officiating the tournament. The track is produced by Grammy-winning RedOne.

The matches will be overseen by Stéphanie Frappart from France, Salima Mukansanga from Rwanda, and Yoshimi Yamashita from Japan. Among the assistant referees, we will see Neuza Back from Brazil, Karen Daz Medina from Mexico, and Kathryn Nesbitt from the United States.

In a Gulf News report, RedOne said, “Light The Sky invites us to ‘shout if you’re with me’ and brings to life the spirit of collective celebration of the Fifa World Cup—an energising message as we look forward to a game-changing tournament of firsts."

“This is an inspirational song with its roots firmly in the Middle East. It is also fitting that the first-ever female referees at a FIFA World Cup are part of this release that will connect with football and music lovers of all ages.”

Rahma Riad is a singing sensation in the region and, at present, she sits on the judging panel for Iraq Idol.

As per a report by Arab News, Riad was approached for the track during the 2021 FIFA Arab Cup.

The song is not entirely in Arabic. According to Riad, this was an intentional decision. Riad highlighted that, being an international event, the artists’ idea was to “represent the world from the Arab world”.

In one of the reports, Riad had also remarked how she always received encouragement to seek her dream and make music. “The upcoming FIFA World Cup represents an opportunity for others to pursue their own dreams,” she commented.

Highlighting the key aspect of the Light the Sky song, Balqees stated, “This represents everything that is positive about the first-ever FIFA World Cup in the Middle East. This is an event that will bring people together from around the world and, through Light The Sky, we are demonstrating how we can lift each other up and create something truly memorable.”

Nora is best known for her work as an actress, a model, and a dancer in the Hindi film industry.

Commenting on the song, she said, “Football, like music, is a universal language that has a passionate following—and I have witnessed this with my own eyes wherever I have travelled across the globe. It has been a privilege to collaborate with such passionate and talented women to create something that celebrates our roots and the excitement of the FIFA World Cup.”

One of the leading Arab singers, Manal, commented, “Light The Sky is a song that carries an inspirational message of hope and togetherness; a celebration of a ground-breaking FIFA World Cup for our region, as well as the strength, creativity and determination of women. These are inspirational attributes that will be shared worldwide through this unique football festival in Qatar.”

The song has garnered around 15 million views on FIFA's official YouTube channel since its release.