Inside the mind of Sharath Kamal 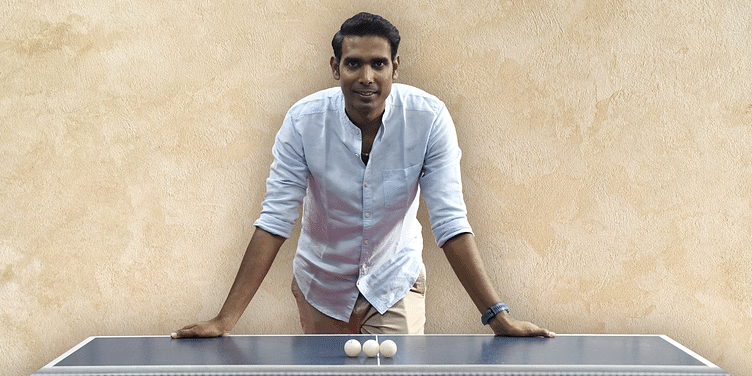 What makes Achanta Sharath Kamal—who won four medals at the 2022 Commonwealth Games in Birmingham—pick up the TT racquet and keep going every day? YS Life tries to understand how he keeps the fire burning even after so many years in the professional circuit.

Congratulating 40-year-old Serena Williams on her inspiring career, another sporting legend Sachin Tendulkar had tweeted, “Age is not what the body tells you but what the mind tells your body.”

But table tennis ace Achanta Sharath Kamal—who won gold in men’s singles at the 2022 Commonwealth Games in Birmingham, at the age of 40—thinks it works the other way around for him.

The paddler believes his body tells his mind what to do. “My physical abilities take over my mental abilities. Many times, my mind says give up, but if I am able to push with my body, I get through the barrier or threshold and extend myself,” says Sharath in an interview to YS Life.

And this is exactly what he did as he whizzed past his opponents at the Commonwealth Games with energy and agility, in the process bagging four medals, including three golds.

Mind over body or body over mind? This may be an endless debate, but it doesn’t matter as long as the desired result is produced. In Sharath’s case, it’s all about reaching the perfect state of happiness. This is the state in which he is “happy” at the end of a session, whether he is training or playing, and is able to tell himself, “Yes, I pushed myself hard enough and I would like to come back and do it again.”

But this is a tricky terrain, as sportspersons sometimes tend to overdo it, resulting in injuries, mental fatigue, or lack of motivation.

“Every time you overdo something, both your mind and body are going to give up,” says Sharath.

There is a fine line between pushing hard enough and overdoing it, and Sharath has learned to recognise it with experience—in a career spanning two-and-half decades, ever since he turned pro at the age of 15.

And what a career it has been, replete with hits and misses, highs and lows, mistakes and learnings, and some soul-searching moments too!

Sharath, who grew up in Chennai, was arguably the best state-level player of his time. But he didn’t exactly burst into the national scene. In fact, his career graph is a testament to the fact that there isn’t a straight line to success.

While he did take his time to find his bearings, what kept him going was his burning desire to become a national champion—a quality that has kept him in good stead all through these long and arduous years. “At the age of 19, early 20s, I got my first break. Since then, I never looked back and continued to go ahead.”

Around 2003-2004, Sharath was a man on a mission, grabbing everything that came his way and not letting go of opportunities. But he still didn’t quite understand the enormity of international tournaments such as the Olympics.

“I went into my first Olympic Games in 2004, I saw a few stars—I dined with Roger Federer, I saw Andy Roddick, Martina Navaratilova, and Kobe Bryant. I just walked around. I didn’t even know what the Olympics meant. Only by 2008, when I saw how the Europeans and Asians trained for it, I knew the whole magnitude of it,” he confesses.

Picking himself up from a slump

Today, when he talks about his journey so far, seated in his parents’ home in Chennai, Sharath seems composed and measured, a marked difference from the bandana-sporting aggressive livewire he is on court.

At times he’s contemplative and at times matter of fact. And when he talks about mind-body-soul integration, he even sounds a tad philosophical. But what he doesn’t do is brood, especially when talking about the low points in his career.

When he underwent a slump in 2011, following five glorious years from 2006-2010, a lot of self-doubts emerged. “There were thoughts about what am I doing, should I even continue doing it?” admits Sharath.

The game had undergone several technical changes and these “unsettled” him professionally. On the personal front too, there were challenges—he was living in Germany and was handling fatherhood in a foreign country.

This is a quote he still remembers: What got you here will not get you there. It helped him understand that he had to accept the changes, adapt, and move on with a new sense of direction. He immediately got down to work and hired a coach in Europe to work on the changes. The results started to show steadily and, by 2013-14, Sharath started peaking again at the age of around 32—a time when many professional players back then were calling it quits.

Today, thanks to sports science, professional players across different sports are able to prolong their career. So, it does get to Sharath when people make a big deal about his age, calling him ‘the grand old man of TT’ or ‘an old horse’. “When you see me play, do you feel a 40-year-old is playing out there? I could be a 30-year-old guy. This is the way I have trained myself,” he says with remarkable self-assurance.

This was not achieved overnight, and there is an army of people working for his well being, including his TT coach, mental coach, physical coach, and nutritionist.

Sharath has been working with sports psychologist Gayatri Vartak, a former badminton player herself. This, the paddler says, has helped him manage the multitude of thoughts that rush into his mind whenever he is under stress.

Cut back to 2006, the night before he played his first Commonwealth final in Melbourne at the age of 24. “I couldn’t sleep. I thought my heart would just come out; it was pumping so hard. I tried to sleep on my stomach, but I felt the bed was moving. I woke up at 3.30 or 4 in the morning and went out for a walk for 1-1.5 hours. Back then, I didn’t know how to manage my thoughts.”

Earlier, he felt he had to stop the thoughts. But now he understands that he has to “exhaust” them and let them run through, so that he can focus on the goal he wants to achieve. “Even now I have sleepless nights. In those moments, I try to get a good recovery, I do my routine so that my body and mind know they have to be ready for the next day.”

Body language is also something he has been working on, with the help of his mental coach. “It doesn’t matter what’s happening inside. You have to show outside that you are up for the fight. That’s exactly what happened at the Tokyo Olympics game (in 2021), against the reigning Olympic gold medallist, in the third round. The score showed 4 games to 1. It wasn’t even close. But it was about the kind of fight I put up, the attitude I showed there,” explains Sharath.

At this stage in his career, when family is also a priority, Sharath believes in ‘holistic management’, as opposed to ‘workload management’. If life—with all its priorities—can be managed in a holistic way, then it’s relatively easy to ensure longevity, he says.

Prod him about the Olympics in Paris in 2024, Sharath says cautiously, “I want to do my job and not let the pressure get to me. I will just let the racquet do the talking. The day I feel I don’t have fun doing this, then I will step away from it. At the moment, I still have a lot of fun and I am chasing the Olympic medal dream.”

YS Life: What do you do to unwind?

Sharath Kamal (SK): I play other sports—badminton, squash, football, handball. I also watch movies. I am a big Rajni fan; I cannot wait to see him after his shoot.

SK: Any place with a beach.

YS Life: Any superstition before a match?

SK: I need to shave. I cannot go to a match with a beard or stubble. I have to be presentable, so that the opponent doesn’t take me lightly.

How COVID has transformed CME and the way doctors keep learning