In this real-life Billu story, read how Chef Pillai meets his long-lost friend 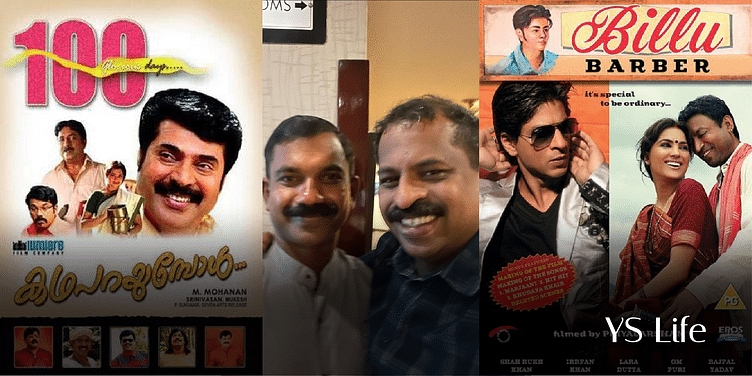 Suresh Pillai, commonly known as Chef Pillai, is an Indian-born British chef and restaurateur, who contested in the British reality TV show MasterChef: The Professionals on BBC Two and worked at restaurants like Veeraswamy in London and The Leela Palace in Bangalore.

Life imitates art far more than art imitates life, said Oscar Wilde in his collection of essays published more than a hundred years ago. Closer home and closer to our times, Indian-born British chef Suresh Pillai, popularly known as Chef Pillai, gave credence to this in a heartwarming tale shared on Instagram.

In his post, the chef begins by alluding to the superhit Malayalam movie Katha Parayumpol, released in 2007, starring Sreenivasan and Mammootty, which was remade in Hindi to Billu, starring Shah Rukh Khan and Irfan Khan.

“Finding a long-lost friend is as special and heartwarming as the incredible climax of the blockbuster movie ‘Katha Parayumbol’ starring Sreenivasan in the lead role. Joy and pain flow out of our eyes as tears as we unexpectedly meet someone who we thought had gone away from our lives,” began the popular chef, who worked as chef de partie, sous-chef, and chef de cuisine at various restaurants in London for 14 years, including Veeraswamy and Gymkhana. In 2017, he even contested in the British reality TV show MasterChef: The Professionals on BBC Two.

Chef Pillai, known for his delightful smile, recalled his early days working in Casino, a restaurant in Kannur, Kerala. This is where he met his “favourite colleague” and namesake KK Suresh. “He was as handsome as Kunchacko Boban’s character in ‘Aniyathipravu’. As we have the same name, everyone called him KK and I was nicknamed S,” he recalls.

It is unclear how many years ago this was, but by the pictures alone, it looks to be anything upwards of 20 years ago. Much like how Balan (Sreenivasan) and Superstar Ashok Raj (Mammootty) get separated over the course of time and destiny in the original movie, KK and Chef Pillai go their separate ways after working together for many years in Bangalore and Coimbatore.

While Chef Pillai carved a niche for himself by working in places like Coconut Grove and then at his first five-star hotel The Leela Palace, Bangalore, his friend KK returned to his village after his father passed away.

Their worlds couldn’t be further apart as Chef Pillai moved to London in 2005 and joined Veeraswamy, popularly known as UK’s oldest Indian restaurant, while KK earned his livelihood as a fisherman back home in Kerala.

“I kept searching him in Facebook. He didn’t know that I became a chef, went to London, and earned the moniker ‘Chef Pillai’. Until we parted, both of us were waiters and I was just S Suresh!” exclaims the chef in his post.

But as a wise man once said, what is meant to be, always finds a way, this friendship too was meant to be and found a way back. In September this year, when Chef Pillai was in London to renew his British passport, he posted a video on his page, to which someone replied with an old photograph of the two friends – KK and S. “A person posted a picture as a comment for that post and asked whether I know the person in the photo. He said that the man in the photo was now a fisherman in Kodungallur. I was amazed by the surprises that social media could spring at us,” says Chef Pillai, who managed to get his old friend’s phone number soon after.

What happened next is anyone’s guess, but it doesn’t begin without some good ol’ bashing that only childhood friends can afford to dole out.

“As soon as he picked up the phone, I started hurling abuses at him. For me, chiding people closest to me as a joke is an act of joy. I think he too enjoyed it a lot. Even though he said nothing as I kept shouting at him, I understood that he too was excited.”

KK, who was a fisherman at the Munambam harbour, did odd jobs in the off-season. He had two daughters, with the eldest studying for BDS. “I felt incredibly proud about him,” says the chef.

And just like in the movie, the chef narrates how KK’s wife, Sheena, who worked for a tissue company, happened to stumble upon the chef’s videos on someone’s phone and spoke about how her husband and the chef were long-lost friends. But, people refused to believe her. When Sheena showed those videos to an oblivious KK, he was surprised but he “watched all my videos until three in the morning,” narrates the chef, who didn’t waste any time inviting his old friend to his restaurant in Cochin.

“I asked him to visit my restaurant in Kochi before meeting me. It was their first five-star experience. After dinner, his daughter spoke to me on the phone. I was delighted to speak to her, and my heart was filled with joy,” says the chef, who implored him to rejoin the restaurant industry.

To this, KK had a humbling albeit amusing retort, “‘It is my biggest dream to work with you. But, I had lost my touch as I have been a fisherman. Besides, I don’t look great as I have been working under the scorching sun.’

Does KK accept his famous friend’s offer to rejoin the industry and make a name for himself, or much like Balan (Sreenivasan) in Katha Parayumpol, does he stay back in the village and become a hero in the eyes of his village? That’s for you to find out, in Chef Pillai’s own words.