The art of ink: how this celeb tattoo artist is popularising the art form 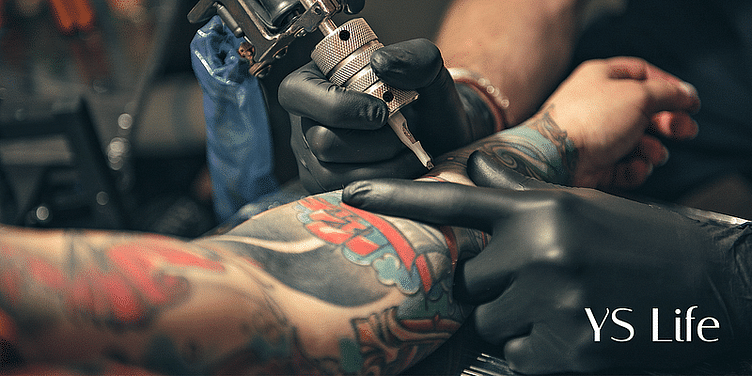 Celebrity tattoo artist Sunny Bhanushali is done trying to prove his talent. His focus now is on being a contributor rather than a leader in the tattoo industry.

Born and raised in Thane’s Dombivli, celebrity tattoo artist Sunny Bhanushali has worked different jobs throughout his career. But making a career out of his hobby never crossed Sunny’s mind.

“My strength lies in charcoal and digital art but people know me as a tattoo artist,” Sunny tells YS Life during a candid conversation over a video call.

Financial constraints at home never allowed Sunny to complete his education, but learning never stopped for the self-made artist. Introduced to tattoos for the first time in 2006, Sunny was fascinated at how the human skin could be used as a canvas. However, the lack of a mentor meant he had to learn the art himself.

It took Sunny a year’s time and six months’ savings to finally lay his hands on a tattoo kit and paint his first tattoo on himself. The end goal was to never pursue tattooing commercially– it was just another hobby that he did for free of cost on his friends and relatives.

“I was always hungry to try new forms of artwork. Money was never the focus, it turned out to be the by-product of my passion,” Sunny says.

Aspiring to become a tattoo artist? Here’s what you need to know

Sunny’s specialisation in custom tattoo designs garnered him a lot of attention. In 2011, he founded Aliens Tattoo, introducing the concept of custom realism and portrait tattoos in India for the first time.

“At that time (2011), Indians were crazy about realism tattoos but only international tattoo artists mastered the art. So I picked it up as a challenge and it turned into one of my personal favourite styles as well,” Sunny explains.

In an attempt to make sure that aspiring tattoo artists do not have to go around searching for a mentor or means, Sunny founded the Aliens Tattoo Art School in 2018, a first-of-its-kind school with a structured course on tattoo art. Today, each batch accommodates 220 aspirants and so far, Aliens Tattoo Art School has trained more than 2,000 people across courses – workshops, long-term, short-term, online and offline.

He also started LILA or ‘Learn It Like Aliens’, an online tattoo learning platform with franchises across 13-plus locations across India, to democratise tattoo as an artwork.

A pioneer in photo-realistic and hyper-realistic tattoos in the country, Sunny has a marquee list of clients, including cricketers Hardik and Krunal Pandya, Ishan Kishan, choreographer Suresh Mukund, actor Roshni Chopra, and Miss India World 2018 Anukreethy Vas, among many others. In fact, cricketer Virat Kohli has also consulted Sunny for his tattoos.

“What I believe is my level (in terms of being a tattoo artist), in the next five to seven years, that will be the starting point for tattoo artists in India… Anybody coming out of the tattoo school will be able to do what I do today,” he says.

The tattoo industry in India is still in its infancy. Today, there are no groups or regulatory bodies representing the profession. While tattooing has become mainstream, it is far from becoming a popular career choice.

Sunny wants to change that.

Speaking about the trends dominating the tattoo industry, Sunny says that while getting a tattoo was more of a fashion statement, it is now starting to become a mode of self-expression.

Sunny reveals that the two tattoos he has done for cricketer Hardik Pandya are very personal. The lion on his forearm is a portrayal of Pandya’s character– both off and in the field. The eagle in his inner arm marks the down time in the cricketer’s life, and how, like an eagle, he decided to shed his feathers and come back stronger.

Known for his mythological tattoos, Sunny worked on multiple tattoos a day during the start of his career. However, now he restricts himself to working on one tattoo a month. Although a tattoo artist first, Sunny thinks of himself as an entrepreneur today. He manages 15 tattoo studios under the brand ‘Aliens Tattoo’ across India, and soon plans to open one in Germany and California each.

“I have passed that phase of my life where I am trying to be at the peak as a tattoo artist. Right now, tattooing is more like a vacation or holiday for me…Right now, my focus is on being a contributor to the tattoo industry…Trying to serve more than being on the top,” he says.

“My greatest achievement as a tattoo artist will be when I am able to produce an artist like myself in less than three years’ time,” Sunny ends.