Why do many men shy away from mindfulness and meditation? 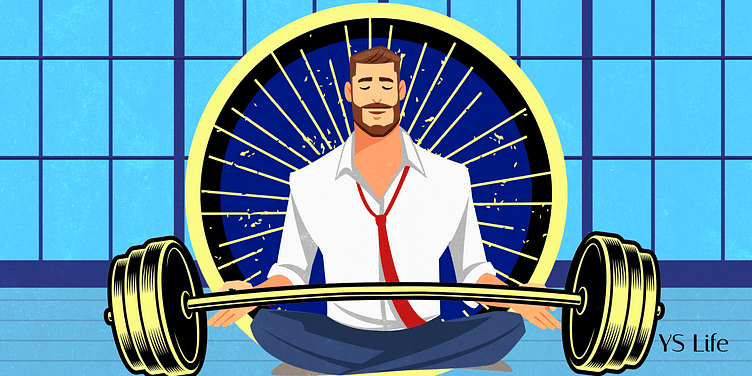 Men would rather swim laps in a pool or hit the gym, since it’s considered a fuller workout. But a little breathwork can be a total game-changer, say experts, on International Men’s Day!

Ask any guy about his favourite way to stay fit and its likely you’ll hear a few gym-related buzzwords like ‘pumping iron’, ‘hitting the treadmill’ or ‘doing box jumps’ and ‘burpees’.

One of the simplest ways to stay healthy and relaxed, yoga, is pegged at the bottom of the list. If you find yourself at yoga class, you’ll see a higher ratio of women in attendance. As per data from a global survey report (Statista’s Global Consumer Survey) in India, where the ancient practice of yoga has originated, 31 per cent female respondents practiced yoga between April 2021 to March 2022, versus 24 percent of men. In the journey to achieve peak physical fitness, why is hitting  the gym perceived to be cooler than simple breathwork? Men get candid on their why yoga doesn’t feature on their exercise routines…

"After sitting alone in the office, it’s not appealing to be by myself and do pranayams"

Maybe it’s the adrenaline-rush of running outdoors or the whole music tempo and sharing a vibe with other gym-goers that makes people want the gym than a yoga class. Unaez Quraishi, 50-year-old IT Head at a technology company, gives us a peak into what frames this mindset. For him, yoga has never been a part of his fitness routines and prefers jogging or lifting weights to feel rejuvenated after a long day at work.

He simply cannot sit alone for long hours to meditate, since he spends extensive hours by himself at work. “It would just make all my thoughts come flooding back into my mind again as I can’t declutter my mind like that. So, I find it tough to ‘disconnect’ this way,” he says.

But pumping iron to some pulsating music makes for a different distraction. “Just 30 minutes of this and it feels like I’ve got recharged. That’s why I won’t make the switch to yoga,” he adds.

Mihir Jain, a jeweller by profession, it’s all about the adrenalin rush he gets at the gym. He loves to work out in the morning as he feels it helps release all that negative energy. He says, “For me, fitness is all about hitting the gym hard and doing a strenuous workout. I also like to see my progress with lifting weights as that ends up translating into a sense of achievement. I’ve been trying to convince myself to take up yoga, but somehow, I haven’t been able to do so as it does not give me that same feeling that weightlifting does.”

This buddy vibe is a big part of fitness motivation and Vinay Maurya, an entrepreneur, who loves working out with friends at the gym, explains why. He says, “We end up chatting, exercising together and having constructive discussions on things like our diet, in between the workouts. We also set these physical fitness goals among our group; it’s a healthy competition where we like see how it’s helping each other transform our physiques. I won’t get the same experience in a yoga class, so for me that’s a big no-no.”

To see things for yourself, all you need to do is head to ground zero. If you walk into any yoga class today, you’ll find it filled with mostly of women. Jenil Dholakia, a yoga expert, affirms, “Yes, there’s definitely a divide of men versus women where the ratio of women who come to the yoga sessions is much more,”

According to Dholakia, men do not consider yoga as their first choice as a wellness option due to its perception of being gentle and mellow. “This is while gym is ‘bro turf’, if that is the right term. While the ancient yoga gurus have been men, it’s contradictory to how it’s been marketed and positioned today,” she adds.

Another yoga and holistic fitness coach, Abhishek Sharma, pegs the reason down to two other factors. He says that because women outweigh men in these classes almost everywhere, men feel like a minority. The other reason could be the flexibility involved in practising yoga. “In my view, women, naturally are on the more flexible side unlike men. So many a time, men may perceive themselves as fit and do push-ups, pull-ups but find themselves struggling in a yoga class,” he explains.

A lot of gender differences in workouts arise out of perception and that needs to change, suggests Abhishek. He explains how a kind of stereotyping that happens. “Yoga and meditation is often seen as something for women and football and riding a bike, for men,” he says, adding, “This is ironical because a century back, the teachers for yoga were men and women were not really taught yoga.”

It is important to let go of the perception that a yoga doesn’t give you the feeling of a complete workout. Abhishek says it can be every bit beneficial, to build focus and recharge energies. He looks to the example of how many celebrities have added yoga and mindfulness to their routine.

“A single gym session class may take 40 minutes, but with breathwork, it can be as short as 60 seconds to feeling calm if it’s done right. It’s just that the initial barrier in the mind needs to be broken, once perceptions change, men will realise how useful yoga can be,” he says.

Underlining its value, Dholakia also says yoga is for everyone and that it practice goes beyond physical postures and moving the body. “This is a practice that connects the body, breath and mind. I feel there’s a greater sense of achieving mindfulness through yoga than a gym. I have seen how a few men come to the class and after just one session, they admit it feels so much more different than they thought.”

He never thought yoga was for him, but swears by it now. His advice to men? Just do it!

Here’s a testimonial. Vishesh Kumar, CXO at a multinational bank, went to a gym and was an active runner for nearly 20 years before crossing over to yoga.

“I admit I never felt yoga was the right thing for me at first,” he admits having preferred strenuous activity seen his teenage years.  “I always felt that yoga wasn’t hardcore and therefore not for me. But I began yoga some time ago and it’s a big part of my wellness regimen now,” he adds.

He has some advice for those who are on the fence about switching to yoga. “The gym may make you build muscle, but yoga builds flexibility back. I pursue pranayamas during the day in the office and I want to tell all of you out there just a small tip like this can help you focus and calm down.”