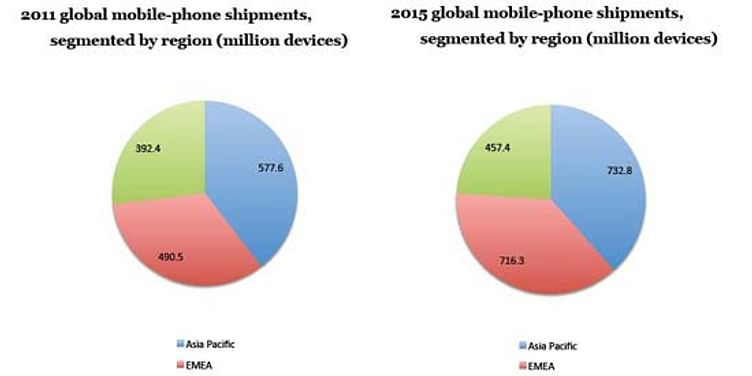 A GigaOM report pointed out how the numbers themselves spell the reign of mobiles in the coming years. The word also has been around that mobile will kill Web 2.0 very soon. A staggering 85% of world population owns a mobile phone! Nokia and Samsung control the majority of this market and with countries going at more than 3G speeds, this penetration will only increase (the Americas, Europe, Asia Pacific, the Middle East and Africa were considered in the following report).

The report forecasts that the mobile handset market will grow at 8% CAGR from 2011 to 2015 and people will have more phones with new activations. Replacement pones market will shrink from 58% in 2011 to 22% in 2015. Also, people would be owning more than one device so penetration will be more than 100%.

• The smartphone market will represent 44 percent of the entire mobile-phone market by 2015.

• The growth of the open-source Android operating system is helping to drive down the cost of smartphones. The proliferation of mobile applications is also increasing the value of these devices.

• The market for mobile phones in the Asia-Pacific region is expected to grow at a 6 percent CAGR through 2015.

• Within the forecast period, growth drivers will shift from new activations to replacement devices. In 2011, 92 percent of devices sold in the Asia-Pacific region are estimated to be new activations; that percentage is expected to fall to 20 percent in 2015.

• With mobile penetration at 64 percent and 61 percent in China and India, respectively, there is still a significant opportunity for growth. However, the wealth inequality in these nations will be a barrier to more-rapid penetration.

Talking about mobiles and their growth, you might want to check how mobile advertising is growing. Also, is mCommerce more convenient than eCommerce?