In50Hrs in its Fifth Edition Kicks Off in Chennai 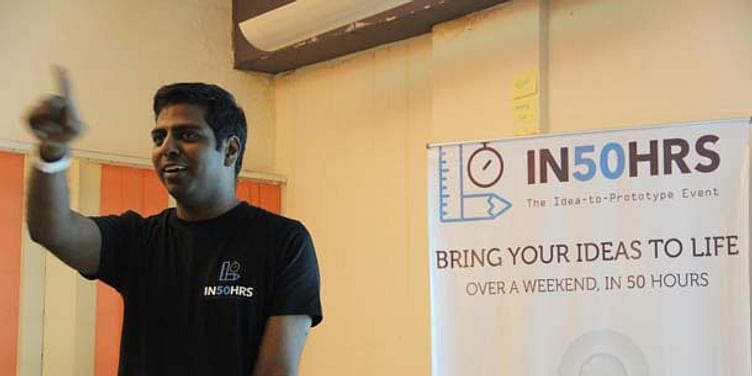 A celebration spirit enveloped the office of the Startup Centre and there was a formal registration desk. I gatecrashed into the In50Hrs as presentations were on, a tad late as I had another meeting to attend. There was a visible level of formality and that signalled the evolution of this hack called In50Hrs, conceived by Vijay Anand, founder of Startup Centre, to bring good ideas to life. This year in50Hrs is travelling to Pune, Bangalore, and Delhi as well. Supposing you had a crazy idea, how are you sure if it has any potential? In50Hrs helps you try your idea and convert it into a minimum viable product. The event brings together ideators, developers, and designers along with a bevy of programmers. The ideator first pitches ideas as well as for designers and developers. And a team of programmers, developers, designers and ideator work on the idea for exactly 50 hours. A galaxy of mentors also give their expert advice. At the end, was it a failed experiment or a success? You will get to know. A mini-startup experiment, if you may call it.

The ideas rolled, and the audience were in rapt attention. Close to 15 ideas were pitched and it remains to be seen how many of them will get into the next level of an identifiable product or at least semblance of it on today evening. Grey hair and bald heads were visible showing that the event has attracted bored professionals, eager to try something new. To escape the curse of the cubicle. The crowd is otherwise predominantly young, as any techie crowd is. Some apps, some web designs, an ambitious image library for e-commerce sites, skater+scooter, wedding gift suggestions, webisodes (stories sourced from random people on their experiences), collaborative learning, customer engagement platform, Facebook deals, snatch protector for mobiles were some of the ideas tossed up. A voting on these ideas was done by the participants.

Some mentors, the likes of Suresh Sambandam, Dorai Thodla, Subbu Murugan, Siddharth, Senthil Nayagam, were missing as they had their day at g|day, organized by Google in Chennai for two days (19 and 20 July). Preetham Venky, Siva, Prasannan, Sanjay Dattatri, and Ashwin Ramaswamy were available to mentor the teams.

[The post will be updated as soon as we get to know which ideas made the grade.]